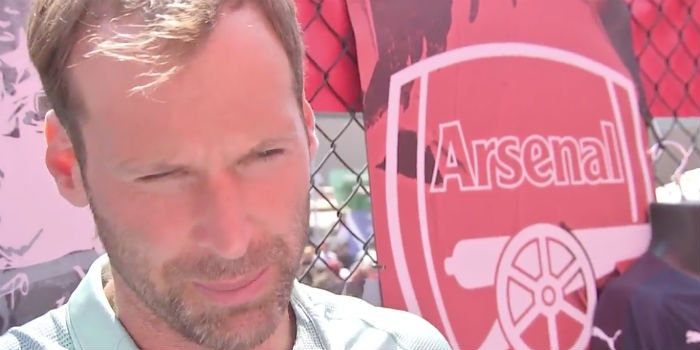 Petr Cech says the arrival of Bernd Leno, as well as the competition provided by Arsenal’s other keepers, makes him more determined than ever to retain his status as the club’s first choice stopper.

The 35-year-old was recently linked with a return to former club Chelsea, but he insists that he wants to see out his contract at the Emirates, unless the club tell him otherwise.

Cech replaced new signing Bernd Leno at half-time of yesterday’s friendly defeat to Atletico Madrid. The veteran made a fine stop with the scores at 1-1 and saved a penalty in the shootout when the friendly finished 1-1, however, he couldn’t prevent his team falling to a 3-1 loss.

“At the start I said I want to fight for my place in this team, I will honour my contract unless the club tells me to go,” Cech told Sky Sports at an event to launch Arsenal’s new Puma third kit for the season.

“I’m performing every day, I’m trying to training hard and [to be] ready when my opportunities come.

“Obviously, I want to show the manager that I can be the starting goalkeeper.

“All the goalkeepers in our club do the same, all the players in their position do the same and it’s great for the team.”

Quizzed on how Leno, who signed for £22.5 million from Bayer Leverkusen, is settling in, he added: “As a new player you need to find a way to adapt to the team, there are so many things that might be new for a new player, including Bernd.

“He’s been working really hard and really well in every training session.

“That’s the only thing as a new player that you can do. I’m sure he has the same ambition as I have, and then we need to see what will be the outcome.”

Arsenal are expected to offload at least one of their first team keepers in the coming week with David Ospina and Emiliano Martinez the most obvious candidates.

Leno: We can forget about trophies if we play like that

Like the competition, hope it makes them all improve.

Me too. I feel like Cech has needed this push. May the best guy win

I’ve been inspired by Cech! I called EE and said that I will honor my contract.

Can already see some positive changes in cech. Be that as it may, I do hope the back line and the team in general provide the goalies with more protection

Swap him for Giroud!

Yes let’s swap a fine keeper for an inconsistent striker when we have 2 who are much better. Great idea.

I agree Cech made some errors last season but he kept the score respectable in a lot of games. I feel confident when Cech is in goal .

I’ve always enjoyed listening to Cech over the years. I think he’d make a great coach, at least a goalie coach.

Competition is great for the team! Can’t see what’s taking us so long to sell Ooooospina to a Turkish club.

I know he didn’t have the best of a season last year but he wasn’t as bad as many say. He saved us a lot of times and even when he made mistakes it was mostly because he wanted to fix someone’s other mistake. I hope he will get a new contract.

This makes me a little paranoid about Leno.
Cech could see tibault was a world class keeper whom he could not usurp at Chelsea. Does he think that Leno is not?

I don’t think it’s that and I’m sure if the offer from arsenal hadn’t come in there is a good chance he would have stayed. He didn’t have to move house and added an extra 3 years onto his contract for the same money which is the best a 35 year old footballer can hope for. I’m sure if Chelsea come in with a good offer he would be happy to go back, but he can’t say that to the press before the offer arrives can he?

He stayed at Chelsea when courtois became number one, it was only when a first team opportunity was offered down the road that he left

I wouldn’t write him off just yet

So he’s off then.

Wouldn’t be surprised if he’s our first choice keeper come March and I wouldn’t be surprised if he’s captain until Kos comes back either. I know there’s a clamour for Ramsey to be skipper with fans, which I’m not against, but Cech is the only person at the club who actually speaks like a captain and seems to have the total respect of all the players.

There’s nothing to suggest Leno deserves first spot at the moment.

That said, we should of course be grooming the younger man and he has a shot at Germany number One should he perform so plenty of incentive.

Cech OTOH is still outstanding so its good competition between the veteran and the rookie.

Lets not forget though Martinez or Macey may also challenge should Leno fail to deliver.

Don’t agree cech is still outstanding, he’s still solid but definitely not what he was

I think the club should put a statement out about who is going to be the number one keeper. This has nothing to do with my fantasy team honest! 🙂

Thus far our market moves this season have been average. Plus point is we got most in ahead of deadline which affords us time to bed them in. BUT it isn’t like Wenger did not get players in early as well. He just happened to have to wait on certain deals like Ozil which concluded late bc of gymnastics being performed by other teams (Spurts and Bale)It created the false narrative that we always panic buy late, a simplistic and facile image lapped up by the gullible and created by media. Podolski for example as we remember was signed ahead… Read more »

-2 for lack of brevity disguising the lack of sense.

-3 for me for lack of knowing what “brevity” means

You’ve made several points which I disagree with. AMN has never looked comfortable at full back and therefore it is good to have Lichtsteiner as a backup to Bellerin plus he could give him good advice. I believe that Torreira is an exceptional signing from what I saw of him at the World Cup and he will free up Xhaka to play in his natural position as a deep lying midfielder. We have a raw but exciting talent in Guendouzi and a crop of youngsters who have shown great promise. There is plenty of firepower up front and therefore I… Read more »

So Auba isn’t a game winner enough for you ?

I think our summer signing have been solid in fairness. Nice to see us bringing in players in areas that have been short in. Back up for Bellerin, while still retaining a young prospect in AMN, who is still far from convincing at RB is a good move, so I welcome the addition of Lichsteiner. Leno comes in to provide competition, at his age and experience we have probably recruited a player that’s Ian better than what we have without spending over the odds. looks good, am excited to see what he brings to the team. Sure, none of these… Read more »

I’d sell both Martinez and Ospina. Arsenal has good options in the youth teams to be the 3rd gk.

Kwame Ampadu Down
Reply to  Pat Rice and Beans

The question is can we sell Ospina? We tried last summer & couldn’t

allezkev
Reply to  Kwame Ampadu Down

Cech saved a penalty. Seems the competition is already working.