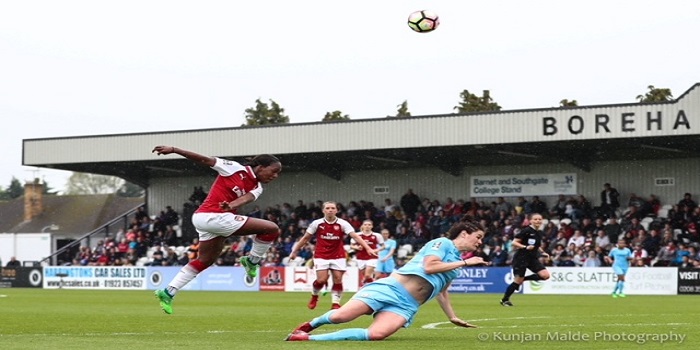 It’s the final day of the season for Arsenal Women at Bristol City’s quaint picturesque Stoke Gifford ground, set in the grounds of Bristol University’s leafy campus. The Gunners need to better Manchester City’s result to qualify for the Champions League. Arsenal are 1-0 up when Jordan Nobbs plays one of her trademark lofted through balls from deep inside her own half.

Danielle Carter, given the chance to play as a central striker, gives chase. Bristol centre half Danique Kerkdijk is favourite for the ball but Carter scents blood. She motors in front of the Dutch defender and into the penalty area, leaving Kerkdijk little recourse but to chop her down. From the press box, suspended a little above the action, we could hear Carter cry in agony and thump the ground.

Carter’s knee has buckled underneath her as she tumbles to the ground. It’s clear that something is wrong. As Kim Little despatches the penalty, Arsenal are readying Katie McCabe to come on in her place. But Carter, by now being treated off the pitch, wags a finger towards the bench. She wants to try to continue. She plays on for another seven minutes. (In the video above, you can see her hobble trying to break into a run for the 4th goal, scored by Beth Mead).

24 hours later, the prognosis is clear. Carter has torn her cruciate ligament and will miss the majority of the 2018-19 season. “I definitely did the injury when I went down for the penalty. I don’t know how or why I managed to stay on for another few minutes, it must’ve just been the adrenaline. I had the scan the next day and it confirmed the ACL injury, which I totally expected to be honest. After a few minutes, I knew that’s what I had done.”

So how long is Dan looking at one the sidelines? “I need to do the rehab properly and take it seriously, I will be out for at least nine months,” she says. “I’ll just have to see how things go.” England are likely to qualify for next summer’s World Cup in France and Carter ruefully admits that, having been on the fringes of the squad prior to now, her World Cup dream is over for another five years at least.

“If I’m honest, I think the World Cup is gone for me now, there’s no good time to get an injury like this, but the timing does make it even worse. It’s not 100% ruled out, of course. I should be fit, but I had work to do to force my way into the squad and realistically, I won’t have time to do that now.” As well as physical rehabilitation, Dan knows that, psychologically, she will be tested and this is somewhat uncharted territory for her.

“I haven’t had a big injury like this before, but already it has been quite tough mentally for me. It will be interesting to see how I cope, but I know I have the support of my club and my teammates and they will help me through it.” I volunteer to move onto a more cheerful subject, namely Carter’s friendship with departed American winger Heather O’Reilly, but I introduce the subject a little clumsily.

“Don’t tell HAO you described her leaving was ‘a happier subject!’” Dan jokes, which lifts the mood of the interview a little. The pair formed a bond that both players describe as a little unlikely. “She was a massive influence on me and we always liked to have a little joke in training. I didn’t actually know who she was when she arrived and nobody could believe it because she’s so big in the states.

18 months has felt like 18 years. The most unlikely friendship, literally Chalk and Cheese but somehow works ??‍♀️. Wishing you all the best in your next step.. until next time Vanillz ??❤️ pic.twitter.com/V1XKpH3mE4

“Somehow we bonded really well and she will be a big miss in the changing room as well as on the pitch. She’s a big character and we wish her every success.” O’Reilly is not the only big character to leave Arsenal Women this summer, with club captain Alex Scott hanging up her boots. Carter says Scott’s influence and leadership will be difficult to replace.

“I’ve been here for 9 years now and Alex and I have shared a big chunk of time together now. It’s going to be really strange her not being at the training ground next season. But I am certain she’ll pop in from time to time and she’ll still have an impact.” While Scott and O’Reilly have left to begin the next phase of their careers, several squad members have signed new deals in recent weeks.

“The Dutch girls are all really happy here and we’re delighted that so many players are committing. Joe wants a core group of players and we’ve really enjoyed working with him. Now it’s up to all of us to work together to get back to where we need to be, winning the league and playing in the Champions League again.”

Carter underwent surgery last week and her long road back to fitness begins in earnest. Given that she played for around 7 minutes with a ruptured anterior cruciate ligament, her resolve and her appetite for the challenge are in little doubt.

Let’s hope that Danni Carter makes a full and speedy recovery and comes back better than ever.

Wishing you the very quickest of recovery Carter

I’m sorry Tim, I’m going to have to take issue with the claim that the Stoke Gifford ground is part of Bristol University (it’s not, although UWE is just up the road). It’s actually part of the South Glos. and Stroud (SGS) College WISE campus. I should knows, I bleeding work there. Apart from that, keep up the good work sir!

I stand corrected! Will edit 🙂

A very brave yet foolhardy thing to do there Dani… She’s tough isn’t she? All the best and hope she makes the England squad too

I fall to the floor and curse my ancestors everytime I stub my little toe on the dining table. I would probably have NDE induced visions if I ever tore an ACL.

The pain is not bad at all once the initial inflammation settles down.

Definitely adrenaline and terrified hopefulness. Been there. Dan is a proper player. England will come knocking again.

All the best in your recovery! ?