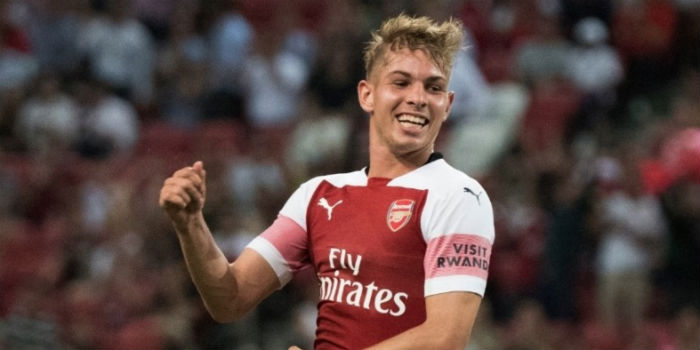 The 17-year-old England youth international sparkled in a drab International Champions Cup friendly in Singapore, scoring the Gunners equaliser in a 1-1 draw before Atletico won the game on penalties.

Just after the break, Smith Rowe showed quick feet to evade three Atletico defenders before lashing a finish into the top corner. The youngest member of Arsenal’s touring party was then mobbed by his senior teammates.

After the game, Emery underlined how impressed he’s been with the left-sided midfielder since he came to the club.

“I think this is the moment for the young players to show quality like Emile did,” the Spaniard told Arsenal.com.

“Historically, Arsenal has worked with young players to give them the chance to work with the first team, for them to show their quality in each match.

“Today I think that every player played well in this game, against a big team.

“For Smith Rowe to score is very good for him and the team. What’s important for us is that every young player is working very hard.”

He added: “He is 17 years old but he has grown up in the academy and we need to give the young players the opportunity to work with us every day and play matches like today.

“They are working hard in training to be involved with the first team. Today I am very happy with his work on the pitch, but not only today.

“It’s every day. He’s starting today’s match because his performances have been good in every training session.”

Smith Rowe will have another chance to shine on Saturday when the Gunners return to the Singapore National Stadium for a match against Emery’s old club Paris Saint Germain.

Luiz and Sokratis ruled out of season opener

We need to tie him down before Madrid take him to replace Ronaldo.

Should go out on loan to develop.

Potential is there but he needs the right exposure at this point.

Maybe our next Jack?

That’s what you call a proper talent. ??

Some of you will know what this means.

He owns a milk float with a V12 Jag engine in it?

Lol yes its the fastest milk float in the west

Leno me, I’ll be your friend
Reply to  Savage

How did the commentator go the entire game without someone correcting him!? He was so persistent that by the end of it I started to wonder if all the rest of us were the one’s in the wrong haha

The commentator on the channel I was watching kept calling ESR ‘Ernie’ for some odd reason. Hope it sticks…

I commented yesterday how The Jeff sale made sense to me because ESR is a more complete player and is ahead at his age than JRA was. He also seems to have a bit of toughness about him even at his young age. We have a pretty full squad and chances to youngsters will be limited. Some of them will get chances in the tin cup, some Europa games (depending on the draw) and some FA cup games (again, depending on the draw). In order to blood the young padawans in, they will have to be managed and not be… Read more »

In the future all jerseys will be emblazoned by a seemingly nonsense string of letters as the Emile Smith-Rowes, the Maitland-Niles’, and the Oxlade-Chamberlains of the world reproduce with their counterpart Johnson-Whittakers, Abel-Joneses, and Jolly-Jameses.

Or they’ll all just do the Brazilian thing and go by Herbertinho, or Little Rutabaga.

The ox did kind of get the brazilian treatment but the likes of esr and amn are more likely to follow the initials route. Personally im hoping our erstwhile youth system can produce an adam fletcher-campbell or possibly a fred umber-collins-keenan-smith-partridge-urbann-rogers-simons.