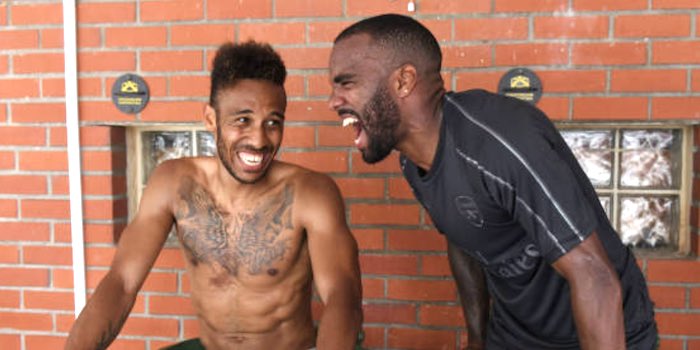 Alexandre Lacazette has stated once again he believes that he and Pierre Emerick Aubameyang can play together, and that with one season in Englush football under his belt he’ll be better in the upcoming season.

The French international struggled at times last season, particularly in the early part of his career with the club as Arsene Wenger often substituted him, and a knee injury mid-season was partly responsible for a goal drought.

However, on his return to action he scored 8 times in his last 10 games, and the former Lyon man is sure this will stand him in good stead this season.

“I hope and I think that will be better than last year because I have one year in Premier League, so of course I will be better,” he said.

And on his relationship with Aubameyang, which has developed on and off the pitch, he said the pair weren’t close before their time at Arsenal, but that they can work together.

“I didn’t know him before because he used to play for the rival when I was in France,” he said.

“But since he came to Arsenal, I’m happy with him and we have a good relationship.

“I like when he plays around me, if he plays in front or on the left, it’s good for me.”

Hope they kick on in their second season, they are potentially great players for us.

Said this in april! Think Laca would be perfect as a CF.

Miki Laca Auba and Ozil. If all perform on the day goals are bound to happen

Would only play this partnership at home. In tough away games, Aubamayeng starts for me. His positioning and pace is far superior to that of Laca.
Auba is wasted out wide. You have to question why we didn’t push for Auba last summer.
Well this is a good headache for Emery to have.

Great striker. Not far behind Aubameyang

An Unpopular opinion, that I agree with. Auba should start most games.

He can’t be overrated if most of you jabronis already don’t rate him. You people did this with Giroud too. You keep being a Piers Morgan and pretending you know what talent looks like, the rest of us will support our players.

Their relationship off the field seems to be blossoming fairly well. I had a big dumb grin on my head watch Auba laugh when Laca was climbing into that ice bin

I really do not mind them playing together as long as Auba plays as a CF. I cannot bear to see our WCS wasted on the wings. He may do a good job there; but I’ll rather one of the very best strikers in the world is primarily used as a striker.