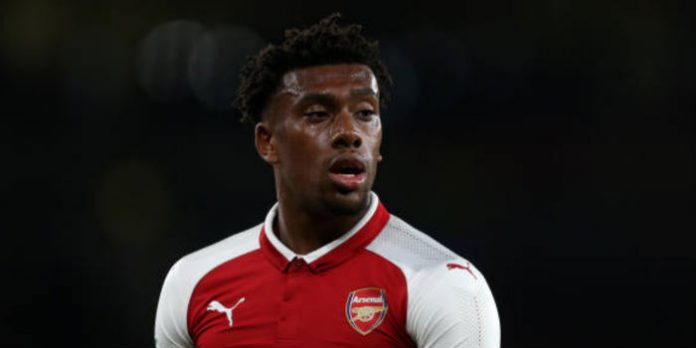 According to the Mirror, Alex Iwobi is on the verge of signing a contract extension at the Emirates that will keep him at Arsenal until 2022.

The 22-year-old midfielder, who has nine goals in 98 appearances for the Gunners, was linked with a move to Lazio over the weekend; the type of rumour that tends to circle just as contract talks are concluding.

It’s not entirely sure when Iwobi’s current deal ends, the evidence suggests 2019 but most reports cite 2020.

In October 2015, Arsenal confirmed that the Nigeria international had signed a new long-term contract after his promising first team breakthrough. Six months later, in April 2016, Arsene Wenger appeared to suggest that the player’s contract ended in 2019.

The Frenchman admitted at the time that he was eager to tie down the Academy graduate to a longer deal.

“He’s a real Arsenal person because he’s been here since the age of eight,” said Wenger.

“He has three years left at the end of the season anyway but we want to keep him here for longer.”

Arsenal never actually announced a new deal. Perhaps a one-year extension and a pay rise snuck in under the radar? Maybe Arsene got his maths wrong?

Transfermarkt, usually pretty accurate when it comes to contracts, list his current deal as ending in 2020.

Either way, it looks as though Iwobi, who has returned from his post-World Cup holiday to join the tour of Singapore, could be the latest member of Unai Emery’s first team squad to double down on his commitment to the cause. A raft of players have signed new terms since the turn of the year, an obvious boon for squad stability.

As things stand the only major questions mark is over the future of Aaron Ramsey. His contract is up next summer. It looks as though that one could go to the wire.

Steve M
Reply to  Maxin In The Shade

22 is not even close to mid-career. Not everyone peaks like Messi.

Mid career at 22? Do you know much about the length of footballers’ careers? My impression is that most, barring injuries, get through to their thirties.

Also, were you fully mature at 22? (I’m assuming you’ve made it to that age, apologies if not).

People had written off Lingard but look how he blossomed late. He’s 25 now. He’s still worth keeping around in my opinion and I’m pleased with this.

I’d say Iwobi is more naturally gifted than Lingard as well. Not in shooting but passing, dribbling, vision. At 22 you couldn’t even call Iwobi a late bloomer it’s still early doors in terms of his career. The Mbappe’s and Messi’s are the exception, people need to remember that.

Sorry but Lingard has more quality in all those departments. Lingard almost second on England team sheet, Iwobi often on the bench with Nigeria. Good player, more development required. Favored by homegrown rules.

Lingard isn’t second on England’s teamsheet, he’s actually one of the last names on there because CM is such a problem position for England atm. Ox would almost definitely be Southgate’s first choice for CM if fit, after that it’s a toss up between Alli and Lingard for the second CM slot. The big advantage Ox has is that he actually plays CM for his club whereas the other two play more like support strikers. And benching Iwobi didn’t do Nigeria much good in the end did it? They were crying out for a player like him against Argentina but… Read more »

I am Nigerian. One major area where we thought the Nigerian coach messed up was not using Iwobi. It clearly had nothing to do with his quality but the coach coming under criticism from Iwobi’s uncle for playing the lad in the wrong position. Iwobi was key to qualifying Nigeria for the World Cup and is the only creative midfielder our country has. Why he did not use Iwobi had nothing to do with what he can offer but because the coach was just stubborn. I think he is a valuable player for Arsenal. He may not get lots of… Read more »

Lingard 3 years older..I think he was talking about Lingard at Iwobi’s age, that Iwobi is ahead in passing, etc.

Let’s see how this one turns out. He’s still one of the very few from the current crop who can dribble and take on players, so definitely offers something different.

Good pedigree, young improving player, lots of skill, scored the goal that took Nigeria to the World Cup, Arsenal through and through.

Look forward to seeing him progress and succeed.

Really do you smoke the same stuff as him when watching? really! SMH

All based on facts – see his uncle (Jay-Jay Okocha), his age, his international career, his joining Arsenal while still at primary school.

At least his uncle was a dribble machine with powerful shots but zero game vision.

Like I said in the transfer news round up, I’d like to see him tried more consistently as a CM as he has all the tools for it and it covers his weaknesses (end product).

Iwobi at CM? I can’t see that happening as he can’t hit long balls, can’t tackle and his positioning needs some work.

Glad to hear it, really want to see what Emery can do with him, perhaps at CM where his finishing is less of an issue but his other strengths are accentuated.

Iwobi is awful not hate but no part of his game is good whatsoever! rare assists, 1 goal every 10 or more performances, poor football brain and questionable off pitch attitude, looks constantly asleep!!…who else in top 6 would buy him? no one god damn awful and I’ll drive him to next club

He’s the second best example of “just cruising” currently at the club, doesn’t look like he has much desire

Attended a family birthday party the day before a game once means he has off the pitch attitude problems ? Come on, give him a break.

I am a bit on the fence with this one as at 22 and three years into the senior squad, Iwobi’s contribution to this team has not exactly been spectacular. He has had his moments, but they have been quite infrequent. I cannot remember the amount of times he turns away beautifully from a defender with his first touch only to then hit a defender with the pass. Perhaps with the right coaching that is something that can be ironed out and he could be a nice option to bring on in the 70th minute when legs are tiring. But… Read more »

I am up for joining the excitement for new season bandwagon but can anybody back this up with emery s actual youth development record at his previous clubs? Genuine enquiry.

that’s great news, so pleased we are keeping him, he will be a great asset for us

“It’s not entirely sure when Iwobi’s current deal ends, the evidence suggests 2019 but most reports cite 2020.”

Well this flies in the face of the transfer rumours. Good. I like Iwobi. He has a lot more to offer than we have seen so far.

I think we have to be very open minded with players that over the last few seasons may have disappointed – Iwobi, Mustafi, Xhaka, to an extent Bellerin and Ramsey – and add to that the Ox and Walcott. Under Arsene we had become a team playing outdated football with outdated methods and often undefined roles. Hopefully Emery will bring us a modern and more disciplined style of football, and it’s quite feasible that players that have struggled before will now start to flourish. I can’t believe that Xhaka for example, who won plaudits from across the Bundesliga for his… Read more »

If Unai just tells Iwobi to stop the sideway passes, that will improve his game a great deal. He gives some nice through balls at times but instinctively goes for the side way stuff.

Agree with this. Particularly with Mustafi. He has a lot of good to his game and is often tasked with stabilising the whole defence when he’s intrinsically an aggressive cb and not a ‘sitter’. That’s hard to achieve and mistakes aside he shows a lot of quality.

Totally agree..apart from Mustafi who my mind is made up on..tho i.d be v happy to change it again lol

There’s definitely a player there somewhere…. but if he has 2yrs left on his deal? I’d certainly hold off on offering him a new deal as he’s done little to warrant one.

Iwobi is a talent. Wenger knew his value, but failed to get the best from him – too much pressure for a young player to figure stuff out for himself.
If Emery thinks he can bring out the best in him, I say sign him up again now. By the time he has proved himself he will only have a year left and it will be too late or too expensive.

Ramsey can leave if he doesn’t want to sign a new day.

I’m pleased with this. I think he’s been described as ‘Hleb’ like and i would be very happy to have that in the squad. He can play on the flank as a 10 or as Wenger experimented with as an 8.
Always felt there’s big things for him with the rigjt coaching. C’mon Alex push on….

He has nothing on Hleb when he was at Arsenal