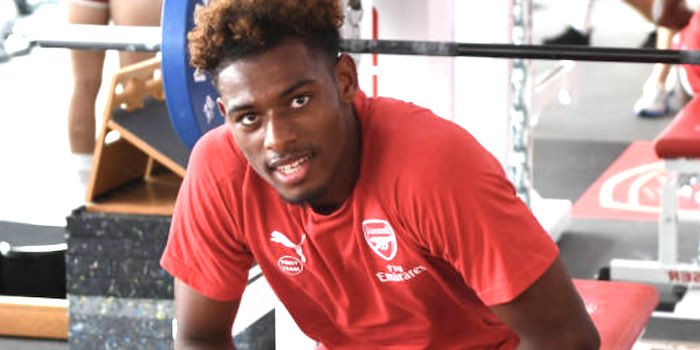 According to RMC, Jeff Reine-Adelaide is on the verge of a permanent move to French side Angers.

After a torrid run of injuries at Arsenal (how often have we written that line over the years?) the Jeff enjoyed a fruitful loan spell at the Ligue 1 club last season, playing 10 times.

It appears Unai Emery has decided he’s surplus to requirements at Arsenal and Angers have decided that the price is right to make their move. Good on them.

At 20-years-old he still has time on his side to deliver on the potential that got so many Arsenal fans, us included, excited about his talent. He was recently nominated for the 2018 edition of the Golden Boy award.

Jeff joined the Gunners from Lens in 2015 and was almost immediately thrust into Emirates Cup action by Arsene Wenger. He wowed the crowds, the (ex) boss and his fellow squad members with a couple of impressive cameos and it looked as though we had a star in the making.

Alas, as is so often the case, it hasn’t turned out that way. When handed game time in the League Cup and FA Cup, he struggled for consistency and when it looked like he might get more opportunities, the aforementioned injury problems got in the way. He only has eight first team appearances to his name.

Despite scoring against Boreham Wood, we sensed the writing might be on the wall when he wasn’t included in the squad for the matches in Singapore. There’s no official confirmation of a move just yet, but it sounds imminent.

We’ll be sad to see him go. What’s the French for ‘Don’t Look Back in Angers’?

ne regarder pas le passe en colere… or something like that…

French is remarkably similar to English.

Lmao, Arsenal have filled me with memories.

What a shame. I was really hoping he would be given a chance this season. Good luck to him.

After a torrid run of injuries at Arsenal (how often have we written that line over the years?)

Yep ! But on the plus side, we have a new medical squad in place and their record could hardly be worse. So maybe we will see less of those ‘torrid runs’ all across the squad. Let’s hope so.

This from a Chelsea transfer but the info is the one that you might want-No buy back clause in Ligue 1. “Chelsea will NOT have an (official) buyback clause on Traoré for the simple fact that (official) buyback clauses are not allowed by the French FA. There are a few stray reports to the contrary on Twitter, but according to this story as well as previous reporting around the Memphis Depay deal by Sport Witness, a buyback clause simply cannot be written into the official contract between a player and a French club.” So if the jeff goes,it’s permanent and… Read more »

I would get really annoyed about this…
but for Angers management

Disappointing but not surprising news. I think he only has a year left and his mate he arrived with (Fortune

… left because he was disappointed at his progress. Better to sell now if he won’t sign a new deal (apologies for the split post)

That would be a pity.

He has been looking great both in pre-season and before when with the U23s.

Considering current make up in midfield, he certainly has opportunity to stake a claim.

May mean though if he leaves we could be considering one more in midfield.

Love the song and of course Arseblog .

Sigh, the worst thing you can have as an Arsenal academy player is me is your major fanboy.
The Jeff
Gnabry
Ryo
Wellington Silva

All got my enduring love, all fell by the wayside.

This is a mistake

Really sad to see The Jeff leave. Maybe he can push on from his injury concerns and establish himself in Angers. Good luck, son!

Sad to see him go, I had high hopes, and I always get excited about developing our own.

Having said that, I don’t remember many young talents we’ve released who have gone on to make it at top clubs and make us regret letting them go.

Question for you guys – who’s the young player we’ve let go who you’ve come to regret the most?

I never rated him. Just a poor man’s Tommy Toupee

One of them is lying!
Reply to  Niran

That pun at the end…

I think he is a straight fight with GUendouzi. One should be kept in first squad the other sent on loan to develop further.

The Jeff looks better bedded in than Guendouzi at this stage.

Unpopular opinion here but I really never got the hype. Yes, he had injuires but even in his first pre-season with us, when all that started, he was not that special. I remember back then I prefered Iwobi and he was the one who made it into the first team that year even though most fans rated Jeff more and was some kind in his shadow (I know there is an age difference). To conclude. I don’t think he doesn’t have the potential but I just think he don’t justifiy the hype he gets. For example last year Nelson did… Read more »

another youngster bites the dust

Jeff, I was hoping you would go on to become an Arsenal legend, and name my future daughter Renee Adelaide after you, and I would have fun for years calling my daughter The Jeff!

This news angers me…

Already been done, should have read the thread before hand. I anger myself…

Ed the Red
Reply to  Ya gooner

It was Adelaide reaction.

Good! Another Arsène that was going nowhere. Next up: Iwobi.

Loving how the new management isn’t hanging on to dead wood.

Iwobi is signing a new deal, so good luck with that.

There have been so many promising youngsters in the ranks that in preseason matches have looked great at a young age with stardom written all over them and then they don’t pan out for various reasons (mostly injuries). The Jeff and Zelalem most recently come to mind. Hard to get excited about young talent these days as there really does not seem to be much of a path to the first team and regular playing time with the club now with maybe the exception of Bellerin’s good fortune the year Debuchy was signed and then soon suffered a long term… Read more »

I think young players will always get a shot at Arsenal. Bellerin and Iwobi will have big roles to play in the season ahead and they are both academy players, AMN just penned a new deal and the club seem keen to get Nelson to follow suit. Emery was also just praising Smith Rowe and his involvement in the first team squad this summer.

“The Jeff” launched across the English Channel! 🙁

Putain! Not the Jeff!

I think Smith Rowe at 17 has shown more than Jeff when he was at that age and while The Jeff plays a more advanced role, I think ESR can be a more complete player. I am disappointed that we wont have The Jeff at Arsenal anymore but the sale makes sense to me.

I don’t see why the Jeff sale makes much sense : 1) Smith Rowe still very young and needs to develop further. Not as impressive to me. 2) Guendouzi still needs bedding in and the Jeff looks a step ahead in pre-season. 3) Ozil and Nhki both turning 30yrs soon. Ramsey unresolved. Plenty of room for a young attacking mid to develop + even if Iwobi is ahead of him, the Nigerian has also yet to prove consistency. There should be plenty of others on the chopping block before we even contemplate selling the Jeff. – Akpom, Jenkinson, Campbell to… Read more »

Some of these may not find interested buyers?? These are the same players who not long ago you told us would bring in an average of 10m each !!!!

I’m a bit disappointed. Surely we don’t need to write off 20-years with as much talent as he has? There may be a few openings in midfield this year too.

He has no place in our current squad. Wenger didn’t see it and Emery too.

So sorry to read that 🙁

Last season we had 18 players out on loan! We cannot build a quality 1st team.squad with 18 loaned players still on the wages bill. At least half need to be let go with only the best prospects being kept and any additional money saved ploughed into the first team squad. I still think N’Zogi is possible if we manage to cull deep.