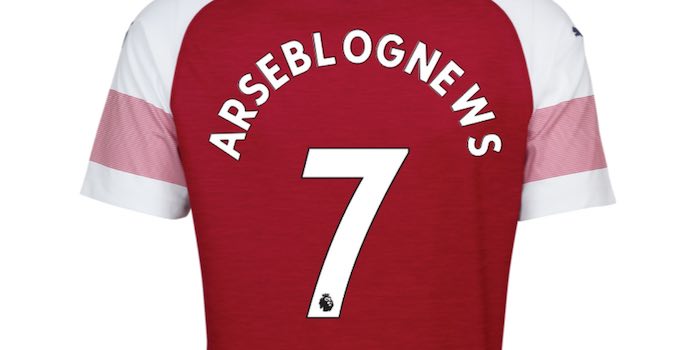 We can tell we’re getting old…we forgot our birthday. Not just by a few days either…by a whole six weeks!

On 1st June we turned 7. Although the day after our birthday, we’re no longer 7 are we? Or are we? Maybe we’re 7 until we turn 8. It’s very confusing.

It’s amazing to think we’ve been doing Arsenal news stuff this since 2011. Time really does fly.

Anyway, without further ado, here’s our annual ‘State of the Arse’ address…

There’s a host of other contributors who’ve chipped in along the way. Their tactical analysis, match reports, translations of foreign press articles and other assorted features really do bring another dimension to the day-to-day output. It’s a real group effort, so thanks to you all!

It’s been a pretty momentous 12 months for Arsenal and for Arseblog News.

While last season was a huge disappointment on the pitch, Arsene’s au revoir and the arrival of Unai Emery (and five new signings) has heightened expectations ahead of the new Premier League campaign. We really are standing at the vanguard of a new era and you can feel the excitement.

There have also been changes at our end. As many of you will be aware, we took the decision to launch on Patreon back in February and we’ve been overwhelmed by the support so far. It has allowed us to expand what we do here on Arseblog News, in particular, increased coverage of the youth set-up from Jeorge, and more focus on the Arsenal Women from Tim.

We’re also revamping our player ratings system ahead of the new season too, and as and when we can improve things and make things better for you, we’ll do that.

We know that readers and listeners don’t want clickbait, you don’t want annoying, intrusive advertising, pop-ups and the like, and we also know that we have a responsibility to try and maintain standards both in terms of the quality of our content, and how we present it to you. Your support allows us to do that, and we’re so grateful.

On Patreon, our highlights have included interviews with actor Mark Strong, Tim Wheeler from the band Ash and former Gunner Philippe Senderos. There have been live phone-ins with James from @Gunnerblog, history podcasts charting the Invincible and 01/02 Double-winning seasons and brilliant long-reads from Tim Stillman. Did you know he has a book out?

Click here to become an Arseblog Member on Patreon

Coincidentally as it’s our seventh birthday, as well as giving you access to all the extra podcasts and written content we’ve produced so far, you’ll be first to hear an exclusive, in-depth interview with one of the great Arsenal number 7s: Liam Brady. Andrew sat down in studio with him this week for a fascinating chat about his career as a player, a manager, as head of the Arsenal youth set-up, and lots more.

That will be out on our Patreon page early next week.

Finally, we’d just like to say thanks to all of you for reading, listening, commenting, sharing our stories, sometimes calling us names, and being part of this roller-coaster experience that is being an Arsenal fan these days.

We couldn’t do it without you, and we hope the same goes for you. Check back here next August when we forget our birthday by two months because the summer has been a haze of champagne and celebration after an unprecedented first season quadruple for the new boss and captain Aaron Ramsey.

Your periodic reminder about commenting on Arseblog News

Will forever love your attempts to avoid giving us clickbait. Keep up the arsesome work!

Happy Birthday to the best Arsenal news site. A day without news.arseblog.com is like a day listening to Phil Collins in an endless loop (yuck).

A belated and very Happy Birthday to my favourite source of news. Here’s to the next 7 years and hopefully regular reports of very happy arse moments.

And what great memories of him in the #7 does that season bring back?

Very warm birthday greetings…. This just reminds me that I’ve been following Arseblog for 5 years… Never thought of this. Cheers to the Arseblog family

Happy Seventh! May you long bless our mornings with reliable Arsenal news. COYGnewsdudes!

A belated Happy Birthday!
Please can you address the imbalance evident in the stats above by comissioning more articles by Graham Dougan? I’d love to hear his views on V.A.R. for example…

He already did one on VAR: https://news.arseblog.com/2018/04/column-premier-league-rejection-of-var-is-a-great-thing-for-the-game/

I like Dougan, hope to read more of his insights. Oh and have a merry belated birthday Arseblog News!

I can honestly say Arseblog News is the only website I check every single day. Every other site I can skip a few days but not this one. Thanks all.

Congratulations and thank you for the brilliant work that you do! You’re in a class of your own.

7 stands for perfection…. By the time u remember to mark ur 14th Birthday in December 2025….. We will still be enjoying what Unai has done to our great team….

Thanks to my friend who showed me this site 6years ago

You are indeed 7 until you turn 8. That’s how it works.

Although, as with match minutes, you’re in your 8th year.

I still don’t understand why announcers insist on saying “the 72nd minute” when the clock clearly shows 71. I mean, I get it, but really. I guess if it makes them feel clever. It’s pretty evident for all to see those folks could use a little boost to their ego.

Anyway, congrats! Without Arseblog and the News I might give up on the internet altogether.