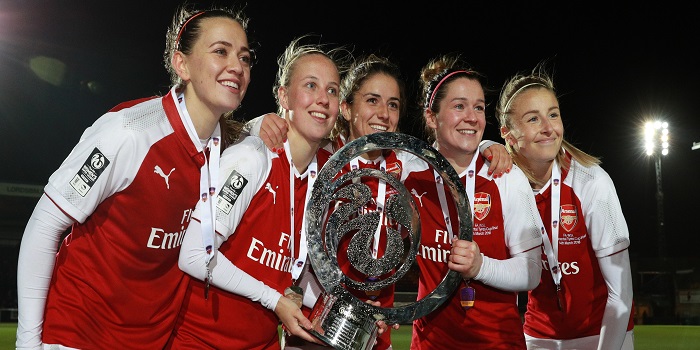 THE LOWDOWN
Arsenal Women ramp up their pre-season preparations with a prestige friendly against Serie A champions Juventus on Sunday at Boreham Wood’s Meadow Park. The Gunners saw off Spurs 6-4 in a behind closed doors friendly last week, before travelling to Merseyside for a behind closed doors affair against Everton.

Juventus will provide stiffer opposition. The Turin side came into being last year when they acquired the Serie A licence of a Cuneo-based team Cuneo Calcio. La Vecchia Signora promptly won the Serie A title in their maiden season in tense fashion. After finishing level on points with Brescia, the league was decided by a playoff between the two teams, with Juve winning 5-4 on penalties.

During the summer, Juventus have bolstered their squad with two familiar names. Lianne Sanderson, who has enjoyed two spells at Arsenal, joined along with former Chelsea striker Eni Aluko, both of whom are expected to play in the familiar environs of Boreham Wood’s Meadow Park.

TEAM NEWS
Arsenal will be without Danielle Carter, who ruptured her cruciate ligament during the final game of last season. Jordan Nobbs also won’t be available after having minor surgery on her foot this summer. New signing Tabea Kemme is out until the autumn as she completes her recovery from a knee cartilage tear. Jess Samuelsson is available after missing the majority of last season with a foot injury.

LAST TIME OUT
Well, the two teams have never before met! But the Gunners routed Bristol City 6-1 on the final day of last season, with goals from Danielle van de Donk (2), Kim Little, Leah Williamson, Beth Mead and Katie McCabe. Juve defeated Ferencvaros 2-0 in their most recent friendly, with Lianne Sanderson among the goals.

PLAYER TO WATCH
Lisa Evans played the second half of last season as an emergency right-back, due to Jess Samuelsson’s painful foot injury. The Scot, who has spent her career as an enterprising wide forward, took to the position like a duck to water, forming part of a defence that kept seven consecutive clean sheets during the winter.

Now Samuelsson has returned from injury, it remains to be seen whether Evans will continue at right-back, where she really excelled last year. With Dan Carter and Tabea Kemme on the injury list, it is more likely that she will return to her original position on the right side of attack. It will be interesting to see how her status in the squad evolves during the season.

HOW TO CATCH THE GAME
Tickets are available online until 4pm on Friday at £6 adults and £3 concessions. Otherwise, tickets will be on sale at the turnstiles. Arsenal.com will also be streaming the game free of charge for digital members. If you’re not already a digital member, it’s free to sign up.

COMING UP
I will be interviewing manager Joe Montemurro about the upcoming season and I will try to get some player reaction to the game too. Both pieces will appear on Arseblog News on Sunday and Monday.

Thanks for the stream of current women’s team news. It really helps to drum up interest and excitement for the new season and beyond. And great that our official website is providing live coverage!