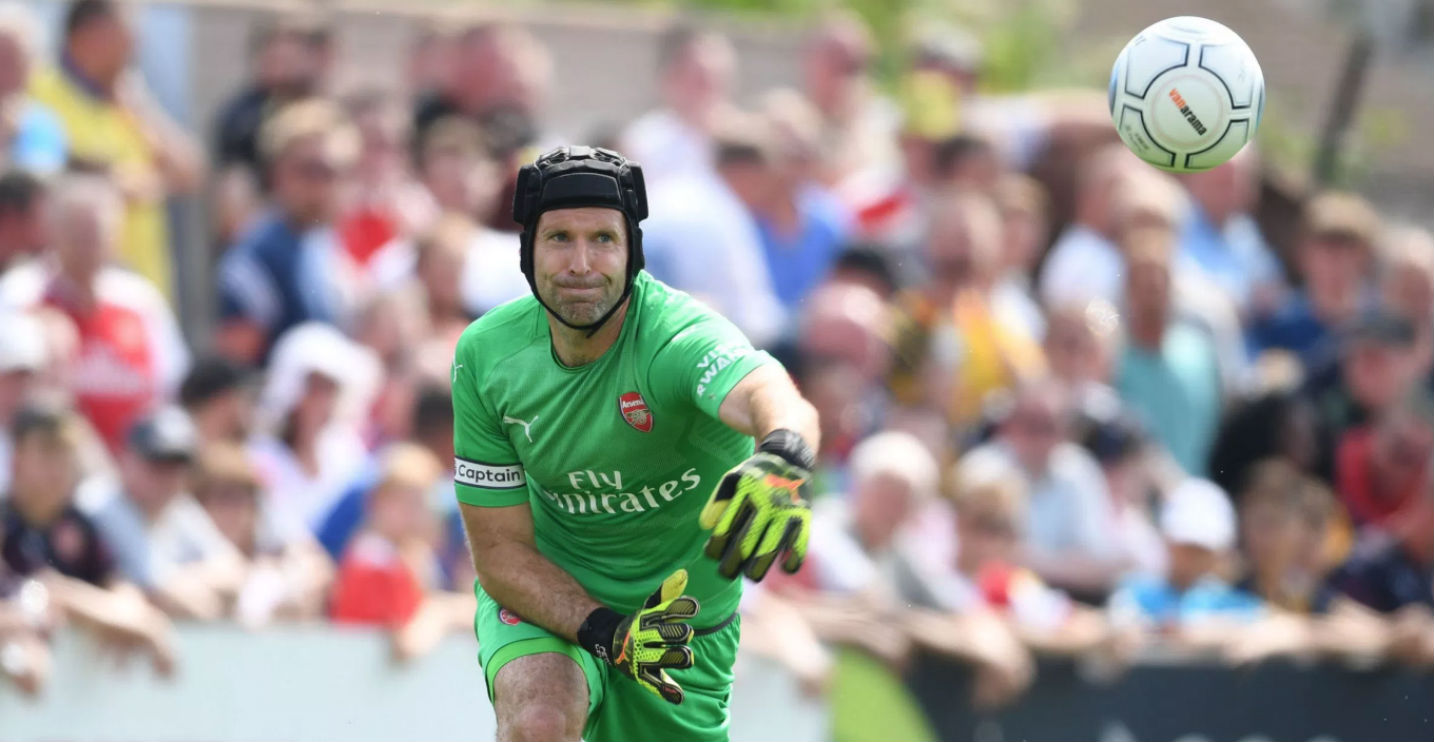 Unai Emery has confirmed that Petr Cech will be in goal for Saturday’s trip to Stamford Bridge.

Despite being baited by Bernd Leno’s former club Bayer Leverkusen after one dodgy pass, there was no suggestion that the veteran would be dropped after Sunday’s defeat to Manchester City but that didn’t stop the press asking him about it in today’s press conference.

“For Saturday, the decision for me is easy,” said Emery. “Petr Cech can continue to start the match, I believe in him.

“If [in the future] Bernd starts, I believe in him also. I am very happy with his [Cech’s] performance. He has experience, he has quality, he has the capacity.”

As Adrian Clarke pointed out in The Breakdown on the official site, the 35-year-old was actually pretty good at the weekend, denying Mahrez, Laporte and Aguero from extending the visitors’ lead.

While he may not have looked completely comfortable playing out from the back, he said he enjoyed the new style and thinks the players as a collective will improve.

Our main concern is who’ll play at left-back. This morning it was confirmed that Ainsley Maitland-Niles has fractured his fibula and will be sidelined for up to ten weeks.

He started on Sunday as cover for Sead Kolasinac, ruled out for a couple of months with a knee problem, and Nacho Monreal who returned late from the World Cup. We can only assume that with a mini-crisis in his position, the Spaniard will now be rushed back for Saturday.

Arteta explains keeper choice & how kids can get more games

meh we got the swiss guy at full back. was solid

Lichtsteiner at left back if Nacho isn’t ready, we don’t want to risk rushing him back and seeing him pick up an injury.

LB isn´t still that big of a worry. The “worst case” scenario right now is probably starting Lichsteiner, who actually looked like he should be in our first XI last weekend anyway.

I honestly don’t understand why we have spent £22.5 million on Leno if the manager doesn’t feel he is an upgrade on Cech. I would have rather the club added that to the £18 million Sokratis money and spent it on a top young defender rather than an Ospina replacement.

Leno wasn’t Emery’s signing. Remember transfers are handled by Sven Mislintat. Emery is just tasked with coaching these players and results on the pitch.

That’s my point. It just seems like mismanagement, with Sven signing a player that Emery doesn’t seem to want. This is similar to Chambers being given a new contract by the management, and then a month later Unai deciding that he doesn’t want him and shipping him out on loan. Bizarre way to run a club, if true.

That’s how clubs are run right now. We have to deal with it.

give it time. Cech is a top class keeper but nearing the end. I personally think Leno will push him out of the no.1 spot before the season is out but ok with that not happening yet. I think it’s obvious Cech has stepped up his game since Leno’s arrival so that suggests to me Cech knows Leno is a really good keeper and he feels he has competition for the first time.

And he wants to show his displeasure by playing Cech? Just curious.

And he wants to show his displeasure by playing Cech? Just curious.

I think he’s seen as one for the future, where Cech will gradually hand him the reins

They obviously had no confidence in Ospina. Leno is only 26, has experience at a high level already and is a top keeper. I feel he will be “bedded” in this seasob, learning from Cech and will be 1st choice next year

Cech really seems to have the bit between his teeth. He’s been in great form over pre season and against Man City (ok he needs to work on his footwork but the traditional goalkeeping bit he’s been faultless). He’s transformed his physique from the large, gangly man with slightly hunched shoulders he was last season into an actual beast. Leno’s on a 5 year contract and competing against a 36 year old, there’s literally no chance he won’t get many chances to win the no. 1 shirt in his Arsenal career. In the short term we have Cech, who don’t… Read more »

So we could have used the money to buy a better defender which we would actually need and use whiles keeping ospina. Then we buy a Goalkeeper next season

Well based on last season we absolutely did need to spend on a new 1st choice gk. Based on pre season/M City and with the benefit of partial hindsight we potentially could have gotten away without it. But it’s a tiny sample size, he could well regress again – like that one time Walcott showed up to the beginning of the season absolutely shredded, chasing everything, only to be frozen out of the first team by November. Secondly, a major reason for Cech’s improvement is likely to be he’s finally got some real competition. He knows he won’t keep his… Read more »

Maybe Leno has been shite in training.

My impression was that he didnt ruled out any of them in the starting eleven but i guess thats wrong.

Despite all the changes, it still seems a mess at the club. We spent a huge chunk of our transfer budget to buy a GK without the coach’s input. I’m worried with Emery’s faith in the same spine that have gotten us downhill past couple of seasons (Cech, Xhaka etc). He needs to be more bold and drop folks who aren’t performing. No need to “please” star names and crowd them into the lineup. No specialist in our attacking set up, just bunch of attacking midfielders on the wings. Try something different, playing a winger like reiss sends a message… Read more »

Emery needs to be bold and just play his best 11 and forget trying to shoe horn players into the team. For Pep it was nothing for him to take Mahrez off last week at 60 mins. Whereas where i was sat I could see guys like Mkhi and Ozil doing nothing and should have been taken off.

The good thing when you play players like AMN, Guendonzi etc are these young boys are hungry with a point to prove, whereas some of these bigger profile players just play within themselves and the game passes them by.

Its been one game. One. Game.

They award 3points irrespective of the game number.

My issue is the insistence on playing out from the back regardless of the opposition lurking in wait for a fuck up. This put pressure on Cech, who doesn’t look comfortable with the ball at feet anyway. It seems like they doggedly stuck to Emery’s will, when sometimes a long ball would’ve been a safer option.

Lichsteiner looked a class above HB when he cane on against City. His experience, leadership and aforementioned class is needed against Hammersmith and Fulham FC

And we bought Leno to under study Cech?

At the moment it’s working

Its on Leno to prove he can replace the incumbent.

Not sure what all the fuss is about Cech’s near mishap.

He produced to excellent stops one against Mahrez with a free kick followed by a quick reaction to prevent Laporte from the rebound and the other when Guendouzi mucked up and Aguerro was straight in on goal.

People need to be a bit more objective.

I am calm about this. I read a great comparison that, in conjunction with a comment from Jens Lehman regarding the keeper situation, has put me at ease about the Leno situation. The comparison was made with Barca buying Ter Stergen. Barca bought Ter Stergen in the same summer that they purchased Claudio Bravo, and for the same price. Bravo was made no. 1 and the much more hyped Ter Stergen got to work. When he did become their starter he still looked shaky at times but had likely built up enough repetitions to confidently work through the kinks. Lehman… Read more »

I was really fed up with Cech last season, but give him his due, he’s come out fighting! I don’t know anything about Leno, to be honest, except the snippets from pre-season, when he looked OK, but I’m also a fan of Emi Martinez, who needs to play, so I think there’s going to be some real competition going on. That can only be a good thing for the club, and as the season progresses it could get quite interesting.

Kwame Ampadu Down
Reply to  Vonnie

He’s come out fighting because he has competition for the first time since he joined the club.