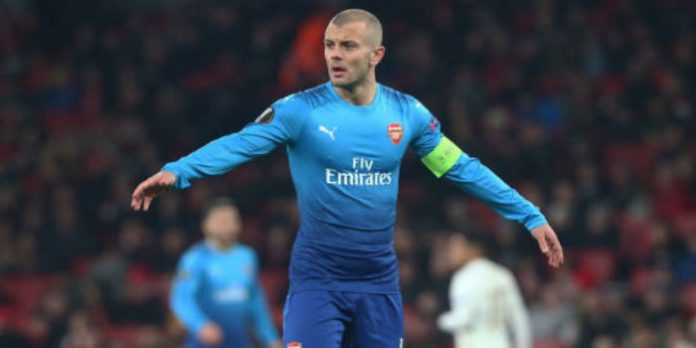 Unai Emery says he has respect for Jack Wilshere’s Arsenal career despite the fact the midfielder chose to leave this summer after a meeting with the new boss.

The midfielder didn’t get the kind of assurances over playing time he was looking for, and with his contract expiring decided on a move to London rival West Ham instead.

This will be the first time the 26 year old has ever played against Arsenal, during his loan spell with Bournemouth Premier League rules precluded him from facing his parent club, and the Gunners boss believes he’ll get a warm reception on his return.

“I spoke with him for 15 minutes here in London Colney before he left,” said Emery. “The first thing for me is I have respect for his career here.

“Our conversation was very clear. For me, one thing is important for him – to be a protagonist in a new project. Because maybe here he would not be the protagonist each match on the pitch.

“It is a more competitive situation for him to play, and then, he chooses what the best was for him in his future.

“It’s for that, on Saturday, I know that here, the supporters like him and have this respect also.

Earlier this week, Wilshere said he was looking forward to playing Arsenal, and is out to show Emery that his decision to marginalise him in his plans was the wrong one.

“It’ll be a strange one for me as I was never able to go there and play when I went out on loan,” he said, “but it’s one I’m looking forward to.

“It’s down to me to prove a point to Arsenal that they were wrong to get rid of me.”

He needs to realise he left and not that he was got rid of, how do you build your team around a man whose ankles are made of clay?

Let’s give him a warm reception. Then kick West Ham’s arse.

I remember Henrys first game against us with Barca… we cheered him onto the pitch when he was subbed on, sang his name.. then instantly booed him when he touched the ball…. but it was followed quickly by laughter. Was a good showing by the fans.

Not the same type of legend, but Wilshere I think would appreciate that kind of jovial welcome back… before his team get beaten.

Well it appears nobody in this team is guaranteed a place – Rambo already found that to be true. So Jack’s expectations could not be met. And now we have Guendo.

It´s always classy to treat everyone with respect. But if your respect is pissed on, then maybe the gloves are off. But then again, maybe ignore him and send them back with 4 goals up their arse, is the classy response.

I’m a little confused…. do you think Wilshire has acted disreapectfully to arsenal?

“It’s down to me to prove a point to Arsenal that they were wrong to get rid of me.” So many things that he could have said and he chose these words. Arsenal did not get rid of him. They offered a deal that he did not take. He´s been nurtured and trusted for many years through his injuries and then turns the truth upside down. Yes I find his choice of words strange to say the least and for me – disrespectful

It certainly is an interesting choice of words. Makes me wonder what was actually said during those conversations, perhaps there’s a little more to it than meets the eye? In any case, his words were not disrespectful, just a player who’d like his former club to see that they were wrong not to consider him starting 11 quality.
Good luck to him.

Runzac, Wilshere statement sounds like that of a person with a competitive, winners mentality.

Which is odd as he certainly didn’t get that from us….

Kwame Ampadu Down
Reply to  Runzac

The modern need to always feel outraged by something someone said is a complete mystery to me.

My reading of this that the contract offered had a heavily play per play type based incentive element locked in. Negotiations seemed to be inching forward on each side. But when Emery (completely understandably) said that he could not guarantee him a first team spot, the numbers on that contract fell away. My heart is sad but my head thinks this is best for both parties.

He never struck me as particularly bright. I don’t think “choice of words” is something that even enters his head.

Personally he’s one of those players I could take or leave so there’s no emotional investment in him having left. Let him shoot his mouth off if he wants. We’ll clobber his team today.

I think this’ll be our starting 11, i’d prefer Welbz instead of Iwobi if he’s ready, but not sure he’ll be ready yet?
And I think Torreira will be eased in over the next few weeks.

It’s the type of game Ozil does well in, but he’s not done anything to warrant a starting place since he signed his new deal at the end of last January, funnily enough he was in scintillating form before that….. He’s the definition of just cruising

What did he ever do for us?

OK, a great goal versus Norwich, came up through the academy winning the FA Cup, lots of energy and great ball control, laughing at Sp*rs, England international, PFA Young Player of the Year, PFA Team of the Year but apart from all that?

I’ll be applauding jack for sure.

And then we smash them.

Left us holding the baby on deadline day so he could take a gap year at Bournemouth to try to impress Fat Sam and have sleepovers with Benik Afobe. We played a combination of Xhaka, Coquelin and Elneny for most of that season as Ramsey struggled with injuries and Cazorla only managed ten games. Come seasons end we were 3 points off Liverpool, points Wilshere was absolutely good enough to help us win. It must be almost unique that the stupidity and selfishness of one player could damage a club so much. Can we please sing for our own players… Read more »

Well, he’s not going to get booed, that’s for sure. I’d imagine some polite applause when the announcer bloke says “welcome back to Arsenal for Jack Wilshere” when he’s reading out their line-up and a chorus of “super Jackie Wilshere/more polite applause” if/when he’s substituted. Meanwhile, we’ll be busy smashing West Ham 🙂

I like many loved watching Jack play for us and always hark back to his performance vs Barcelona but the comment about “Arsenal that they were wrong to get rid of me” does annoy me a little – he didn’t want to stay because he wasn’t guaranteed to play, just like when he left Bournemouth. Now he is totally entitled to do that, it’s what he feels/felt is best for his career – but don’t dress that up in a way that could suggest it’s on Arsenal. Anyway, I won’t be booing him on Saturday – appreciate what he did… Read more »

As someone remarked in an earlier post he does suffer from a lack of self awareness to which I would add both on and off the pitch so let’s not get too upset by that statement about being forced out. If he was aware that his playing style was a key contributor to his injuries perhaps we would have seen the Jack we saw against Barcelona regularly.

Aren’t you contradicting yourself? If Jack had changed his style to avoid injuries, he would not have been playing as he did against Barca.

As we should. He always wore the club on his sleeve. But for injury and fitness levels, he would have still been a useful asset for us. On that note, there’s nothing fundamentally different about the high press we are doing now with Emery from when Wenger was in charge. We were still pressing high back then and having our fullbacks (Bellerin and Monreal) caught out leaving gaps, still susceptable then as now to the high ball over the top. Where we differ now is we sustain our press better. I’m not saying it was Jack alone but back with… Read more »

What could have been if it was Lichsteiner that came in instead of Laca is all I’ve been thinking of all week.

RVP was a world class player who when he left us dropped us in the shit. Wilshire not so much.