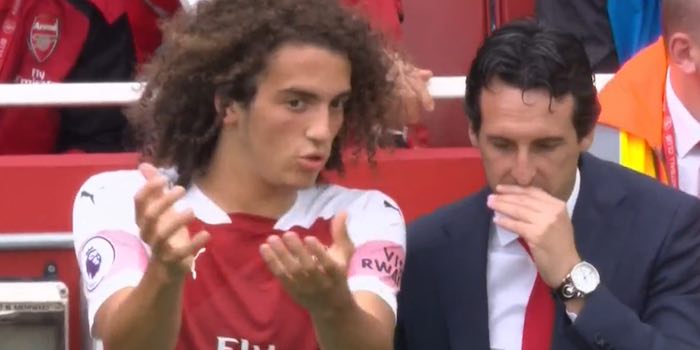 Unai Emery says that the performances of Matteo Guendouzi have been a big surprise coming so early in his Arsenal career, but admitted he’s a player he’d had his eye on since his time as PSG boss.

The 19 year old midfielder has started both Premier League games so far this season, and it would be a surprise not to see him in the starting XI for today’s clash with West Ham.

He hasn’t been flawless, but showed at Stamford Bridge against Chelsea that he’s capable of holding his own against the big boys, and he produced one of the passes of the match to highlight his range on the ball.

Speaking ahead of today’s game, the Spaniard said, “He is improving. He is playing and working every day.

“He is hungry – he wants to improve, he wants to learn every day, every match. He is doing it his way, with character and quality.

“We are very happy with him but every match is a chance to show his progress with consistency.

“It is a very big, positive surprise with him.”

Of course it’s only been two games, so while he has been a positive, let’s give him time because at 19 he’s on a steep learning curve and there may be a few bumps along the road yet.

ARSEBLOG’S WEST HAM PREVIEW: TIME TO GET SOME POINTS ON THE BOARD

Let’s hope he is a Vieira, comes in and plays well and stays at a high level rather than drops.

A lot to hope for in a young player but would be great if he did.

He will win the young player award…..
Next year he will be B.D’or

on a more serious note he has outperform every other players thus far.

Our very own Mbappe…..

And ridiculously not as costly as Martial

Can’t help but say his name in Mcbain’s voice when he says MENDOZAAAAAA!

That tweet of him slamming the floor after Auba’s miss

I just remembered that there was talk we’d be in for Fellaini in the summer. Wow. What a relief we didn’t get him and what a nice surprise Guendouzi turns out to be

A Different George
Reply to  viegunner

The Fellaini rumour was based on the information that we had our eyes on a French-speaking midfielder with big hair. (I thought we were getting Rabiot.)

We thought the same with kolasinac

Haven’t been that excited about a young lad since Cesc broke through. He has been absolutely brilliant so far even though if you don’t consider that he has played 2nd french decision football last season. With that in mind it’s astonishing how good he has been.

Lot of fans were even more excited about Bellerin.

Whats interesting for me from this kid is, he never shies away from the ball, and with our new tactic of playing it from the back you need his kind of midfielders who make themselves always available. It’s only been two games yes, but the two games offered arguably the toughest tests the EPL can offer. So the optimism can be justified.. Better hair than Fellaini btw.

He had a 94% pass completion rate against Chelsea (100% in the first half where all our other players struggled to get 2 passes together) and hast the most successful tackles and interceptions in the whole league after 2 games (against such quality opposition). You look at him on the field and think “boy, this kid is good” and then you look at his stats and realize he’s even better.

Can’t wait to see him at my first game of the season. Him and all the other guys really. I just love my Arsenal!

I hope he score a wonderful goal today

In the full interview Emery reveals Guendouzi wasn’t his signing, looks like another Mislintat find.

He knows him well though.

Fascinating player. Can anyone think of when a DM has come in so young and immediately looked so competent? I mean in any team, I’d be interested in examples.

Obviously he’s made errors but his calmness, tackling, consistency of passing and most importantly his natural positioning is quite nutty considering he’s wandered in from Ligue 2 of all places.

Teenage forwards who excel, sure (positions of least individual responsibility, and more about intuition than craft, in my view), but a decent DM this young seems really odd.

He’s looked exciting but I’m really worried about the comments on here comparing him to Viera and Cesc! He’s 19 and played two games of top flight football in his career, people need to chill ffs! Great talent but let’s not build him up just to knock him down.

One of the risk that paid off.

His energy is really good for us.

Lost the ball a number of times today but in general positive.

Its going to be any combination between two of either Guendouzi, Torreira or Granit.

They all have their merits and deficiencies.

BUT they all have great long range passing ability which we need to take advantage of better.

Pleasantly surprised is an understatement. I actually signed in football manager a few months before we did, for my all conquering Lille side so when we signed him up I was quite excited ?

A bit like when Pires arrived and had been my favourite CM97/98 signing! If he can live up to that I’ll be very happy!

Xhaka looked better around the young lad today and and if Torreira can hit the ground running once he gets starts then the midfield might truly be transformed.