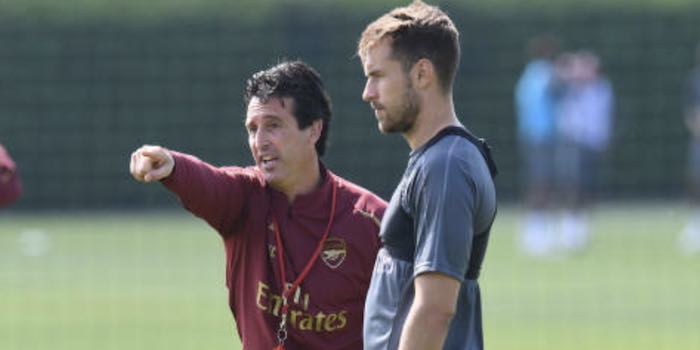 Unai Emery says it’s not his job to speculate on Aaron Ramsey’s contract situation but he is eager for the Wales international to sign a new deal at Arsenal.

The Gunners hierarchy have so far resisted the temptation to cash in on the midfielder, even though he’ll be a free agent at the end of the season.

There’s still an outside possibility that he could be sold to a foreign club before the end of the month, however, as things stand it seems more likely that we’ll keep plugging away at the negotiation table.

Asked about Ramsey in his first Premier League press conference of the season, Emery replied: “That’s not my work. For me it’s very important he stays with us.

“His experience here in Arsenal and the Premier League is very important and will give us all the information and performances in his quality.

“Then, the contract is for speaking with the club and the players.”

It doesn’t hurt Ramsey to edge closer to the end of his current deal. It certainly worked wonders for Mesut Ozil who bagged a whopping pay increase back in January.

Ramsey is expected to be one of Unai Emery’s ‘six’ captains this season, although the club is yet to confirm the overriding leader. Keep your eyes peeled on tomorrow’s programme notes.

Should have sold him, if he doesn’t want to sign fuck him off, don’t get me wrong I hope he stays because I think he’s a fantastic player, but we’ve seen all this sort of shit before.
The club should have put an offer on the table, take it or fuck off.

Your negotiation skills are to be admired and revered. But perhaps there wasn’t an offer for him or an acceptable deal on the table from another club. You can’t make him leave.

Agreed. I think we’re a better team with him than without but if he won’t sign he should be shipped out.
We’re now going to get six months of ‘will he won’t he’ overshadowing everything else we do followed by a January of transfer speculation and rushing around to get something rather than nothing at a point where we could do with focusing on shifting dead wood

Does anyone think there is an outside chance that the manager’s already decided to sell? Allowing him to stay beyond UK deadline day could be a bargaining tactic “We can’t replace him now, so if you want him the price has to be exceptional”. Am I just a crazy conspiracy theorist? I like Rambo a lot and nobody else really gives goals from midfield like he does, but at the same time if manager wants Auba from the left, Laca in the middle, Mkhi on the right and Ozil pulling the strings, a more solid platform of Torrera and Xhaka… Read more »

Considering Ozil and Mhki play a similar style and both are hitting 30, it would seem wise to keep Ramsey.

He is best frankly as an alternative to Ozil in an advance position gambling into the box where he is most lethal.

He is an asset with his increase experience and he can also cover in midfield if need be.

Don’t see why we should be in a rush to sell him. Contract is an issue and we can assess again in January.

I stopped reading after your first sentence. Ozil and Mkhitaryan are totally different type of player. Anything else you said would no sense

Also, in contrast to Auba, Rambo comes off as a little more satisfied with himself than he should be. He is unhappy not being The Star and doesn’t want to be an “alternative” to anyone.

Alexis’ stroppy bullshit last year added an extra strain to everything and was a nuisance. Rambo is clearly not happy right now to be a Gunner. Sell him, let him be a star at a mid-table Serie A or Ligue 1 club and let’s be done with it.

I’m not sure I’ve ever had this amount of anticipation regarding a team sheet. Whilst I’m pretty sure we’ll start with 4 at the back, I have no idea how the rest of it will look. My stab in the dark is this…. ……………Leno …Sokratis Muastafi Bellerin . Niles ……. Xhaka Torreira …. Rambo Ozil Mlhitaryan ………… Aubameyang I’m thinking Lacazette to miss out for this one? Can certainly see City having the majority of possession, so Aubameyang is more suited than Lacazette. If Rambo and Ozil start? One surely has to start wide right? And I’m not sure I’d… Read more »

Emery said weeks ago that Koscielny is the main captain, despite being out injured till new year

That follows the Arsenal tradition of the captain not playing.

Is that a version of ‘Speed Dating’ ?

Ramsey – and he is perfectly entitled to do this – is playing ‘wait and see’. If we have a season that puts rocket boosters under us and fires us in a new trajectory with all the improvements required, gets us into the top four, with a Cup and the promise of more to come – he might re-sign. If not, he’ll be off on a Bosman with a stupendous signing on fee elsewhere. Can’t blame him. But the bonus for us, is that he will have to keep his form and fitness up to keep himself in the window.… Read more »

Yes he is perfectly entitled and god knows many have done it before him. But the timing of it really grates with me. When the club is trying to have a positive new start with a new manager, that Ramsey should be the one providing a blot on the horizon, is annoying.

I’m completely with Clive from the Arsenal Vision podcast on this one and disagree with all the other (excellent) podcasters out there. Arsenal as a football club should not be held to ransom anymore, let alone by someone like Ramsey, who is, to my mind, a good player but not up there in the top bracket. More Walcott than Van Persie. If he won’t sign a reasonable contract, then let’s just use him to augment the team and let him run down his contract and go on a free. It will be a loss financially, but it will send out… Read more »