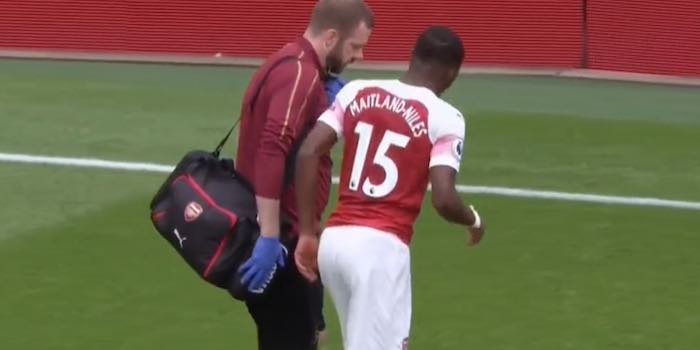 Arsenal have provided an injury update ahead of the Chelsea game on Saturday and there’s bad news for us and Ainsley Maitland-Niles after it was revealed the midfielder had suffered a fracture to his fibula.

The new style updates from the official website and the Arsenal medical team gave us this snippet:

“Ainsley has sustained a small fracture to his left fibula and will be out for six to eight weeks.”

So, while relatively serious it could have been worse. The 20 year old was injured in a clash with Kyle Walker in the first half of the 2-0 defeat to Man City and although he tried to play on he was replaced by Stephan Lichtsteiner in the 35th minute.

Best of luck to him for a speedy recovery.

There’s some good news though, in that Nacho Monreal has returned to full training to give us a natural left-back option for the trip to Stamford Bridge.

As well as that, Carl Jenkinson’s hopes of finding a new club have taken a hit with a ‘serious ankle sprain’ that will leave him sidelined for six to eight weeks, and with the transfer deadline for loan moves to the Football League closing at the end of August, he’s now likely to remain at the club until January.

Unai Emery will meet the press later today so we might get a little more insight into the injury situation, and his plans for Chelsea.

More on that later.

Arteta: We have decided who will leave on loan

We’re starting to look a bit short, a little handbrake might be necessary at the back!

Speedy recovery AMN and come back speedier and stronger ?

Can’t understand why anyone would thumb this comment down.

Chelski’s russian troll farm. They need something to do between election tampering campaigns.

just when i thought this was the season AMN explodes like bellerin and wilshere did. still hoping for it

Yassss. Monreal coming back into the team is very very welcome. One of our best players last season. Let’s hope Lichtsteiner plays on the right ahead of Bellerin – last week’s performance earned it.

Because he’s a good hardworking midfielder and an important member of the squad. Even more important now AMN injured

Good luck to AMN, hope it is only two months and he comes back fit and fighting, for him and for us.

One thing we know from the article about our training facilities is that they try to keep it real when it comes to predicting for how long a player will be out for even though they know it might backfire if there´s a setback.

Still hoping he´ll be back sooner than that!

Was there much in Walker’s challenge? To me it looked like he left a foot in? Although I only saw it once so could be talking shite.

I don’t like Kyle Walker but he didn’t do anything to deliberately injure AMN, it wasn’t a bad tackle or anything

AMN was unlucky. There’s a big difference between trying to “injure” your opponent and trying to “hurt” your opponent/slow them down. I would hope that no professional athlete ever wants to injure an opponent on purpose. Well, Roy Keane might be the exception to that rule.

Walker is twice the size of Maitland-Niles, he looked like a skinny little kid next to him and was literally bulldozed over.

It was a brutal demonstration of how we’ve fallen so far behind the top teams in terms of size, strength and athleticism during the last 10 years of the Wenger reign.

John, with respect, AMN is 20 years old, and Walker is 28. That makes a lot of difference in the relative strength of people, not just footballers. To use it as a way of having a pop at AW is just sad; give it a rest now, he’s gone and we have a new coach.

Rubbish, age has nothing to do with it. Koscielny is 33 and still as skinny as when he arrived, Wenger kept them away from the weights room, he said it himself and it’s cost us over the years.

I think john c is a spud with no home.. stay out of goonerland… your toilet will be completed soon

I think you are right Dob. It is so funny how he is trying to win an unwinable argument. COYGs

You’re a moron. Actually, worse than a moron. A lying moron.

And not many are as big as our Kolasinac in City’s or other teams in the EPL. It’s obvious how Kola has set the EPL on fire….what was your point again?

To be a good footballer first of all you have to be good at football, once you have that you then have to be physically prepared both in terms of fitness and strength.

I believe too many of our players over the years haven’t be adequately prepared in the later, it’s not very difficult to understand.

I’d be very interested to hear from those who believe we have been and why they think it.

Who said monsters? You don’t have to be a back row forward to play football. All those players you’ve mentioned aren’t light weight, Messi, Iniesta, and Villa all short with a low centre of gravity. Maitland-Niles has been a professional since he was 17, plenty of time for him to put on 3,4,5 kgs of muscle that would have stopped him making Walker look like Johan Lomu. It’s been going on for years, i remember Zabaleta walking through Gibbs, Koscielny cost us at least once a season getting bullied because he still weighs about 75kgs, he could comfortably be 80… Read more »

Maybe you should be shipping the lads lots of American sized burgers Bro.

Or judging by the pictures of the new training centre someone at the club has already decided that professional athletes should be properly physically prepared and has installed a few squat racks to build their strength up to the required level.

A club of Arsenal’s size shouldn’t have one of their full backs bulldozed by an opposition full back irrespective of his age.

Judging by your comments, one would think Barca is comprised of giants!

Thats what it is, because there’s no in between of being too small and being a giant.

“There is no jogging, no long sprints, no weight lifting,” writes Perarnau in Pep Confidential.

In other words, it ain’t nothing to do with Arsène antiquated méthodes as you implied.

Thats why Arsenal have just spent £30m on a gym

Because players like Kolasinac, Giroud, Podolski, Song, and Mertesacker were all such delicate flowers?

Well done, you’ve named some players whom are naturally large, gold star for you.

That doesn’t stop the argument that those players we’ve had over the last 10 years whom weren’t physically strong enough were not sufficiently prepared or trained to overcome those deficiencies, of which Maitland-Niles is the latest of a long line.

Your mental deficiencies make it pointless to argue with you. AW out!

It’s your mental deficiencies that are highlighted here by your inability to articulate your argument but instead be personally abusive.

I agree with your general point JC, and we got away with skilful fleet footed players in the early AW wonderyears, because the fullbacks of Walkers size were so poorly conditioned they didn’t get near our boys. Things Have Changed, as you say. AMN is a big frame and could readily add 5kgs without affecting his stats that much. But that’s what the new physical improvement team and facility will hopefully be monitoring and guiding. If you weren’t quite so aggressively negative in your opening salvo you might not spend so much time on the ropes. Maybe that’s how you… Read more »

I blame Wenger and the medical department for this. They should have seen this injury coming.

I wonder how many people won’t get this.

I am pascal cygan
Reply to  Chrispy

This comment left me confused. Im pretty sure you meant it as a joke but then again ive seen comments from some here that is just dumb. Hmm..

It’s bloody raining too!
I blame all the French

Its no laughing matter but can Ospina play LB? 🙂

Oh how I long for those “around 3 weeks” days.

Or injury updates such as, “player XYZ is running outside again. He lacks sharpness and is a little bit short for Chelsea. He is two weeks away”

Dirty Man City, Ramsey got done by Laporte early in the game and they rotationally fouled us throughout the game but nobody is going to criticise a team coached by Saint Pep. Kyle Walker knew exactly what he was doing as did Sterling who went around kicking everyone in a red shirt.
Strange (well not really) how our ‘softies’ picked up a couple of yellows for bugger all – nothing changes with Riley’s mob, roll on VAR.

Kwame Ampadu Down
Reply to  allezkev

allezkev proving why fans of other clubs think Arsenal fans are nothing but whingers.

Such a shame. Wishing you all the best, AMN.

“Nacho Monreal and Danny Welbeck
Both players are in full training.”

Think Welbeck has utility for us right up top where his frame and power can give us something slightly different. Would keep him for half a season more at least.

Elneny can go with the right offer (but unlikely)

It may be only a small fracture but if it was me I would’ve been stretchered off with a bottle of whiskey splashed all over my face. He took that one like a man.

We’re good for left back with Monreal back in and Lichsteiner proven capable. We are also good in deep midfield with Torreira either with Granit or Guendouzi or on his own in a more attacking set up. Likely Ramsey can also cover. AMN when he returns will be our utility. Elneny only if we get a good offer should be sold. Personally I feel we should shift AMN to Rback (his natural side) to eventually compete with Bellerin. Leaves us room to add further in midfield in necessary next summer but right now the biggest issue is at Cback still.… Read more »