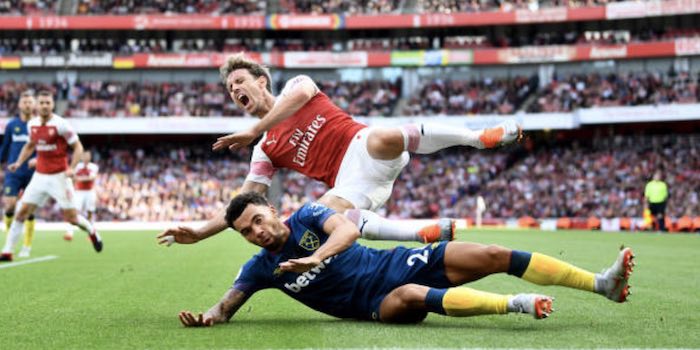 ‘We have to improve’ is the mantra coming out of Arsenal despite the 3-1 win over West Ham yesterday.

There’s obviously pleasure at having won our first game of the season, but from the manager to the players there’s an acceptance that things need to be better defensively.

Unai Emery said, Aaron Ramsey said it, as did Nacho Monreal who insisted that he was happy to win but not so much at the amount of chances we allowed the Hammers during the course of the 90 minutes.

The Spanish international, who drew the Gunners level with a 30th minute goal, spoke after the game and said, “We are really happy for getting our first three points in the competition, but obviously it hasn’t been our best performance and we have to improve.

“In the first half we conceded, but we could have conceded a few more so we need to learn about that.

“But as I said before, we are really happy about getting three points and it was our target before the kick-off.”

The 31 year old didn’t pull any punches about the performance either, and when asked what exactly needs to improve at the back he continued, “Obviously we have started a new era with a new manager so we have to keep improving.

“For example, against Chelsea we did an excellent job but we conceded three goals and got zero points, and today we have to admit that we probably played worse than the other day, but we won the game so we have to keep improving.

“I think we are in the right way and we are learning every day in training. I think we’re going to keep improving.”

For more, read today’s Arseblog review of the match

Bellerin is a winger and a very good one. He´s by no means a defender. Gendouzi looks good on the ball but at 19 he has lapses in concentration that make us very vulnearable. Torreira provides much more cover for the defence. Xhaka´s role is to distribute the ball and he also has limited defensive attributes. So, our best cover for the centerbacks has yet to start a game. Taking a chance with a 19 year old Ligue 2 midfielder might be romantic but it is not benefitting the team defensively. This is going to a long hard winter.

Gendouzi was excellent against Chelsea and City. Yes, he’s young and can’t be expected to keep that up every game. However, he should only be dropped after his performances drop, not before. As he was today. Wingbacks is the name of the game nowadays, and Bellerin is a good one at that. The problem is that as offensive as he is allowed to play, he should be covered a lot more by his team. We’re still struggling with overall balance, and hopefully Torreira will help us there. I still think Ramsey would have been excellent as a complete CM, but… Read more »

I suspect Ramsey himself doesn’t agree with you.

I AM ARSENAL
Reply to  Mistafi

Thats the problem. Ramseys ego. His best season was as an 8 next to Arteta.

Mpls
Reply to  I AM ARSENAL

Agreed, but the sticking point is as mentioned directly above – that’s not his instinct. Arsene played him with that intent many times subsequently, but he spent most of it attacking, not with balanced play. Ramsey seems to be taking on board Emery’s pressing very well. If he were to do that in a balanced manner as an 8, we might see the best of him. The catch to that is that in Xhaka we have a much better passer, distributor, and distance shooter. Next match I’d start with Torreira #6, Xhaka #8. Then the next conundrum is how to… Read more »

I AM ARSENAL
Reply to  Mpls

Ozil Ramsey and Mhki cant be in the same team..1or even 2 may have to drop out depending who were playing. We should play Laca and Auba up top wit Ozil as 10. Midfield 3 of Torreira sitting with Xhaxa and Ramsey just ahead. Diamond basically..But with our movement it can be very fluid and flexible. Makes sense if width coming from dangerously high fbs. Iwobi and Mhki miss out for two strikers.

More likely Ramsey doesn’t agree with Wenge, Emery and you.

Yeah, Lichsteiner with Bellerin infront might be worth a go.

Go three at the back and play Hector and Nacho as “wingers’…?

Because some players better at going forward when they can gather momentum and with space in front to run to. He is not really a tidy dribbler in close space. Wing back is probably his best role.

I don’t think any arsenal fan needs encouragement to get behind the team.
For Christ sake we just won our first match of the season under a new era

stop all the negative vibes around the players and let us support them…..

leave criticism for opponents….
we are to defend Wat belongs to us as long as they still with us….

why should we support other teams bashing our team……

No one dare criticize my player in my presence no matter how bad he is…..

I will defend them with every relevant points I can get…..

I saw Wat in your comment and I was very confused for a moment on why you were making a plea to defend Deeney and his bunch of thugs.

how long have we been saying that now

at the very least i am happy with the change in the attitude from our team. before last season if we had won like this we would be happy . but what monreal is saying reflects the changing attitide of the team. we are looking at performance rather than the results. we could have been happy with the 3-1 score but the team is not

If the gunners had abetter defence they would nt have lost to MC and Chelsea.
But that’s football considering inconsistent performance of the refs.
There are no easy games as shown by the Wolves and BHA results.
That’s why the epl is the most exciting in the world.
Hopefully the defence will improve from now and not leak 5/6/7 and 8 goals.

What we need, and what I hope we will get, is better team defence. Pundits, critics, and fans all look at the back four and heap scorn on them for being open and vulnerable, and blame them for not having the right instincts, but we have to remember that everyone plays a role in defending and keeping the ball. Emery’s tactics are meant to keep the ball in the opponent’s half as much as possible, not unlike City, and the high line is a dangerous game — we will get exposed and have to chase, even when we’ve perfected the… Read more »

I think there has been an improvemen certainly in mentality and attitude.

Anonymarse
Reply to  I AM ARSENAL

It’s amazing that top level professionals that get paid what they do and can not stay focused for 90 minutes. Arsenal defending is unbelievably poor. Most of their mistakes is ball watching and lack of tracking their man.

On the other hand, I did notice yesterday that they are doing better on the offside trap, in sync with one another (not perfect).

I thought that despite the fact he got beat embarrassingly stabbing at the ball for the first goal, Mustafi was much more disciplined and focused positionally, and he was good in the air. So far this season haven’t noticed him taking himself out of the play making a slide 20 yards upfield.

The 1v1’s however, they all seem to need a bit of work on.

That goes for the entire defense and midfield. For their goal, GUendouzi was too slow to come back. Maybe Sokratis could have closed down slightly quicker but essentially we needed bodies back quicker. Several occasions, we were playing with fire adopting the offside trap. Bellerin on two occasions too far behind the Cbacks but Mustafi should track the runner regardless and stop this annoying habit of calling for an offside, Play it safe. Sokratis too had his moments, one instance he got his kick completely wrong the other (for the second time) he was too slow tracking with Anautovic and… Read more »

In terms of defense, I feel we just need to watch certain things. Looks like we were better managing the defensive highline against West Ham (prob less tricky opponents) Also for most parts slightly better with fullbacks watching crosses. BUT the off side trap is an issue if Bellerin does not get the line right, and Mustafi should track the runner instead of claiming for offside. Sokratis also guilty of being too far off a player (Arnautovic) I don’t think Torreira alone will solve any of these issues and Granit did better work than many deem to imagine. OTOH good… Read more »