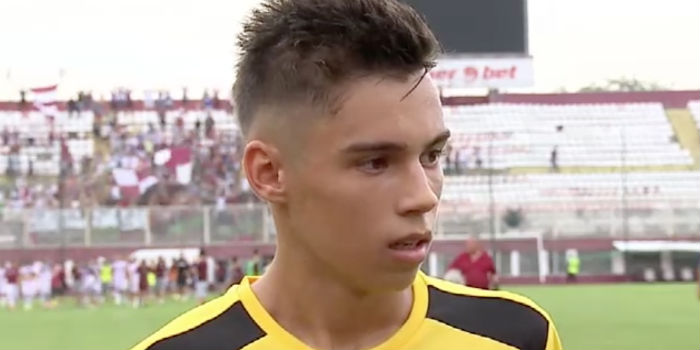 Arsenal are on the verge of signing Romanian teenager Catalin Carjan as they continue to add a foreign flourish to the Academy.

The Gunners have made an offer to the midfielder which he says he’ll sign as soon as he turns 16.

“It’s something else,” Carjan told DigiSport. “They’ve been watching for me to get more matches and that was it. After that, they sent me the tickets to go join them.

“They told me that I was a good player and that they wanted me to join the first team in two years.”

Carjan has apparently played for the first-team at Viitorul Domnesti since he was 13. Yes, they may be in the third tier of Romanian football, but that’s quite an achievement.

At this point, we’ll sound a note of caution. Great things were expected of Vlad Dragomir, another Romania youth international, but he was released by the club this summer after three years on the books at London Colney. He’s since joined Serie B side Perguia.

Carjan looks set to be the second significant foreign arrival at the Academy this summer. Arsenal are also thought to have snapped up Barcelona left-back Joel Lopez.

Lots of risk with young players, they may not fulfil their potential. But would rather we were taking our chances, it’s great to see youngsters come through.

Didn’t Vlad refuse to sign a new deal instead of being released?

There was a player Alban Bunjaku in Academy not too long ago who looked extremly promising. Tall quick striker.

Refused to sign a deal, left and haven’t heard since.

Santori you are a Coach or Analyst somewhere? your general discussions and knowledge are pretty deep..

Wow Superb news,we are short of Romanian prodigy since Dragomir.Hope he makes it here.

Oh and on totally unrelated topic,there was an article of Arsenal’s new TABLE!! Turns out IT’s probably a Pl thing as Burnely got an almost similar one.And we were thinking Silent Stan is being less stingy..? https://twitter.com/SimonPeach/status/1029699888836173825

Defensive midfielder. It was Wenger that always bought attacking midfielders.

I just read that Guendouzi really thinks of himself as an attacking midfielder. He is definitely young and French and was more or less unknown. So, maybe not so new.

Tim
Reply to  A Different George

I think it’s slightly lost in translation there. In the profile he is characterised as offensive, but from a deep area of the pitch.

He swears a lot, that’s why they called him offensive.

Vlad wasn’t released. Released indicates no contract offer was given.
But he was offered, he just chose not to sign it.

He’ll beat Messi’s La Liga scoring record by the end of the year.