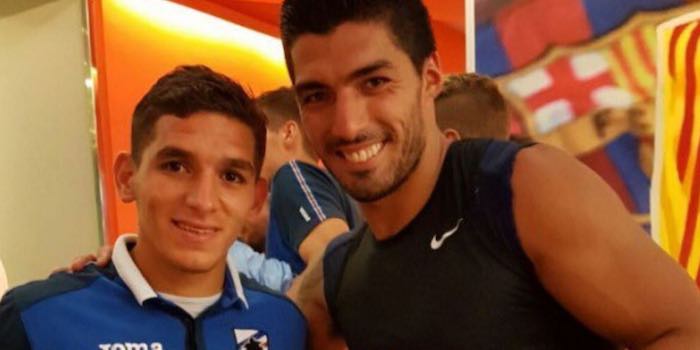 Arsenal new boy Lucas Torreira says that Luis Suarez was a factor in his decision to move to the Gunners, as his international teammate spoke glowingly of English football.

The Barcelona striker’s relationship with Not Director of Football, Raul Sanllehi, was part of it, but the man Arsenal tried to sign gave him good advice about the Premier League in general.

Speaking ahead of Saturday’s home game against West Ham, the former Sampdoria man told the programme, “Luis Suarez was very helpful. He spoke to Raul, who brought many players to Barcelona.

“I was really grateful to Luis and only a short time ago I sent him a message of thanks.

“He told me how wonderful the Premier League is, describing it as the best, and he said what a great time he had at Liverpool. When we were together for internationals he would often talk about the Premier League.

“I’m also good friends with Gaston Ramirez and he spoke about the Premier League, the stadiums and the coaching.

“He said that everything would be great, that it would be a good move for me and now I’m seeing everything he talked about with my own eyes.”

As for his early impressions of life at Arsenal, he continued, “I’m incredibly proud. It feels such a privilege.

I find it amazing that all my life I’ve dreamed of playing in the Premier league and now I’m part of the Arsenal team, wearing this iconic shirt with all its history.”

It remains to be seen if the 22 year old will get his first start following his £26m move from the Italian side, but chances are he’ll get the nod tomorrow as Unai Emery’s men look for their first points of the new season.

The Barcelona striker’s relationship with Not Director of Football, Raul Sanllehi…

Lucas: “Hey Luis, what do you think of Arsenal?”
Suarez: “I never knew what they were smoking over there”

Did he advise him to ask for £1 over what he’s offered?

I don’t get all the criticism & ridicule of the £40m+1 offer. Liverpool later admitted that there was a release clause requiring them to accept any offer over £40m, so £40m+1 was the only sensible offer to make. It was actually smart of Arsenal to find out about the clause and make an offer just high enough to trigger it.

It’s not Arsenal’s fault that Liverpool refused to honour the release clause, or that Suarez obviously didn’t want the move enough to bother to enforce his release clause.

Entirely agree. Liverpool were able to spin the story in their favour, entirely because Suarez didn’t really fancy the move (and because the press love to have a dig at Arsenal). In my view, if we’d offered way more than the release clause, we’d have really looked like mugs and still wouldn’t have landed Suarez.

That’s not true. They agreed there was a gentleman’s agreement they consider any offer over 40million, but there was no release clause.
Arsenal tried it and came across as arrogant when 40 million probably would have done it

John Henry came out publicly to say there was a clause but that the extra £1 was an insult so, regardless of the clause, refused to honour the clause. He then added that Arsenal could take Liverpool to court if so wished but such clauses are generally unenforceable.

I stand corrected.
Either way it was an uncharactic lack of class from arsenal and I don’t blame Liverpool at all for the way it happened

A P
Reply to  Hantal

Do you pay double what the supermarket charges for bananas??
Nuts.

Did Luis mention how tasty the match-ups against Chelsea were?

A Different George
Reply to  Zafgoon

A match you can really sink your teeth into.

I want d hammers to be harmmered @ the emirates stadium.
…

A few months wait for that buddy

It’s at the emirates today

Why should we wait a few months before we hammered the hammers at the emirates stadium ?

Totally unrelated, but I feel disgusted by this post by BBC Africa on Arsene Wenger, here is a man that dedicated over two and half decades of his life to develop and modernize English football, total lack of respect, poor journalism and a failed attempt at humour.

Shocking, the article you have linked says: ‘Liberia’s President George Weah has lavishly praised former Arsenal former manager Arsène Wenger, as he gave him with the West African state’s highest honour – the Knight Grand Commander of the Humane Order of African Redemption. “You proved yourself as a teacher when you revolutionised forever the approach of scouting young talents all over the planet, particularly throughout Africa,” Mr Weah said of his former coach during the ceremony in Monrovia, Reuters news agency reports. Thousands of spectators cheered as Wenger received his medal in a hall at the national stadium. ‘ How… Read more »

I suggest thinking about getting a sense of humour.

My initial response to this was “WTF” not gonna lie