Arsenal have their fourth straight win in the Premier League and their fifth in all competitions with a 2-0 win over Everton. That is excellent! It has seem them shoot up the table to a tie for 5th place. Yet for all of the winning Arsenal have been less than impressive in the course of their winning streak.

Let’s explore Arsenal vs Everton, by the numbers, but first some advanced stats in picture form: 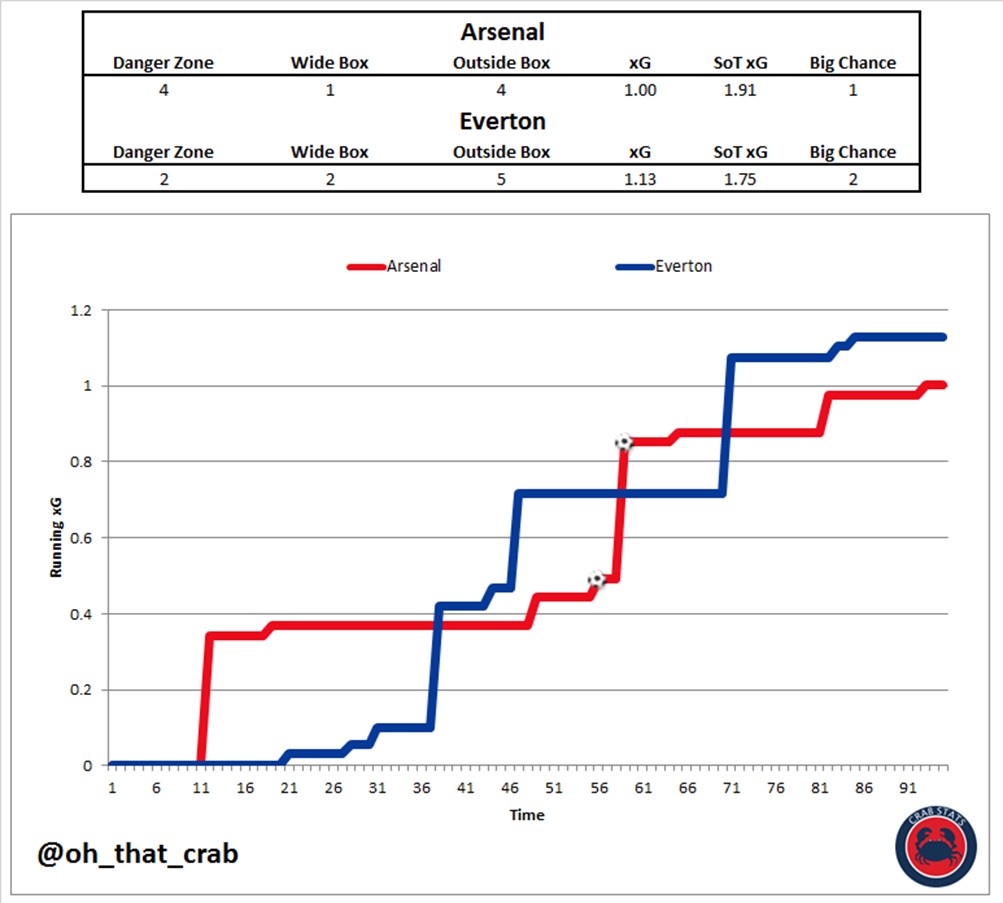 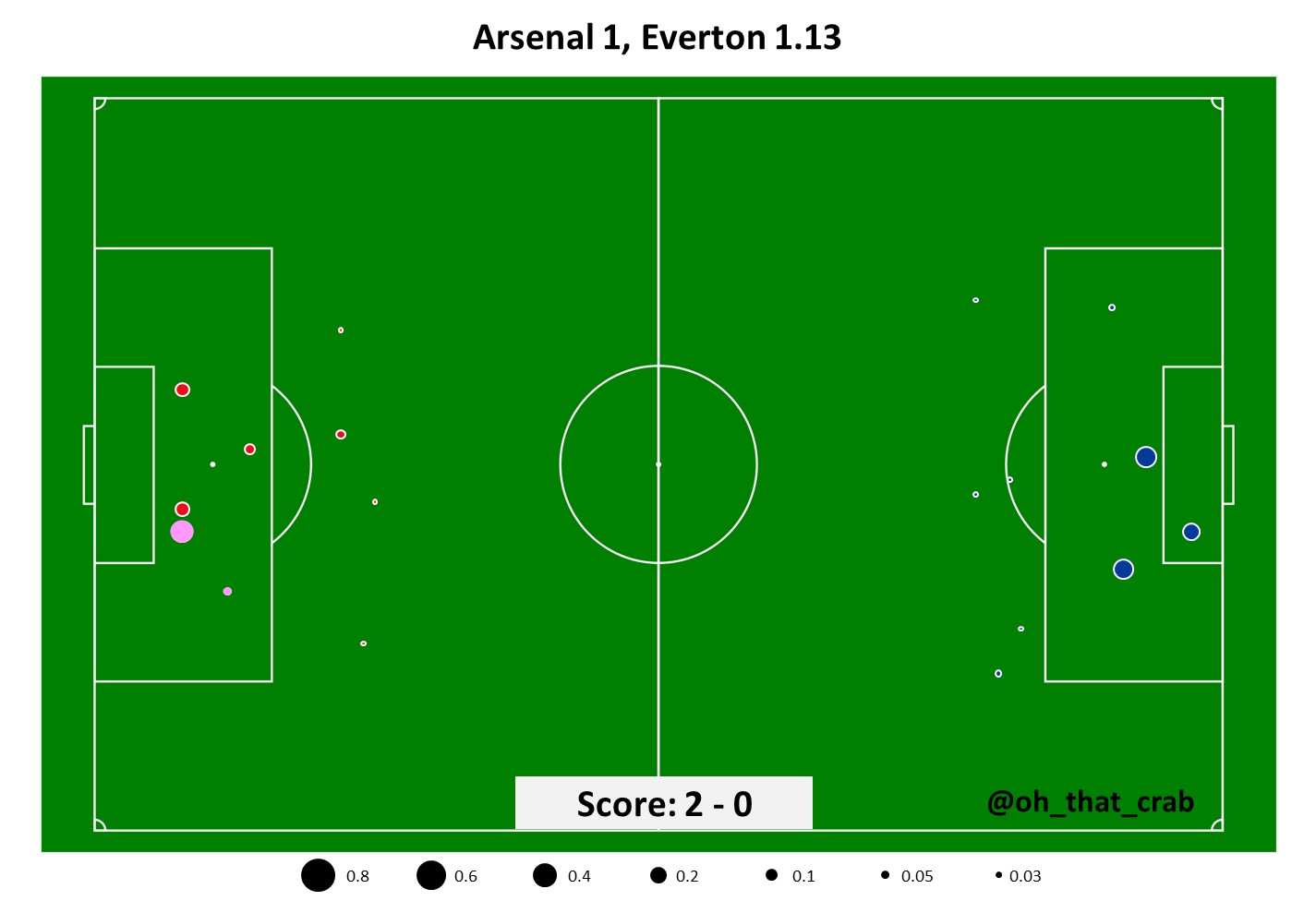 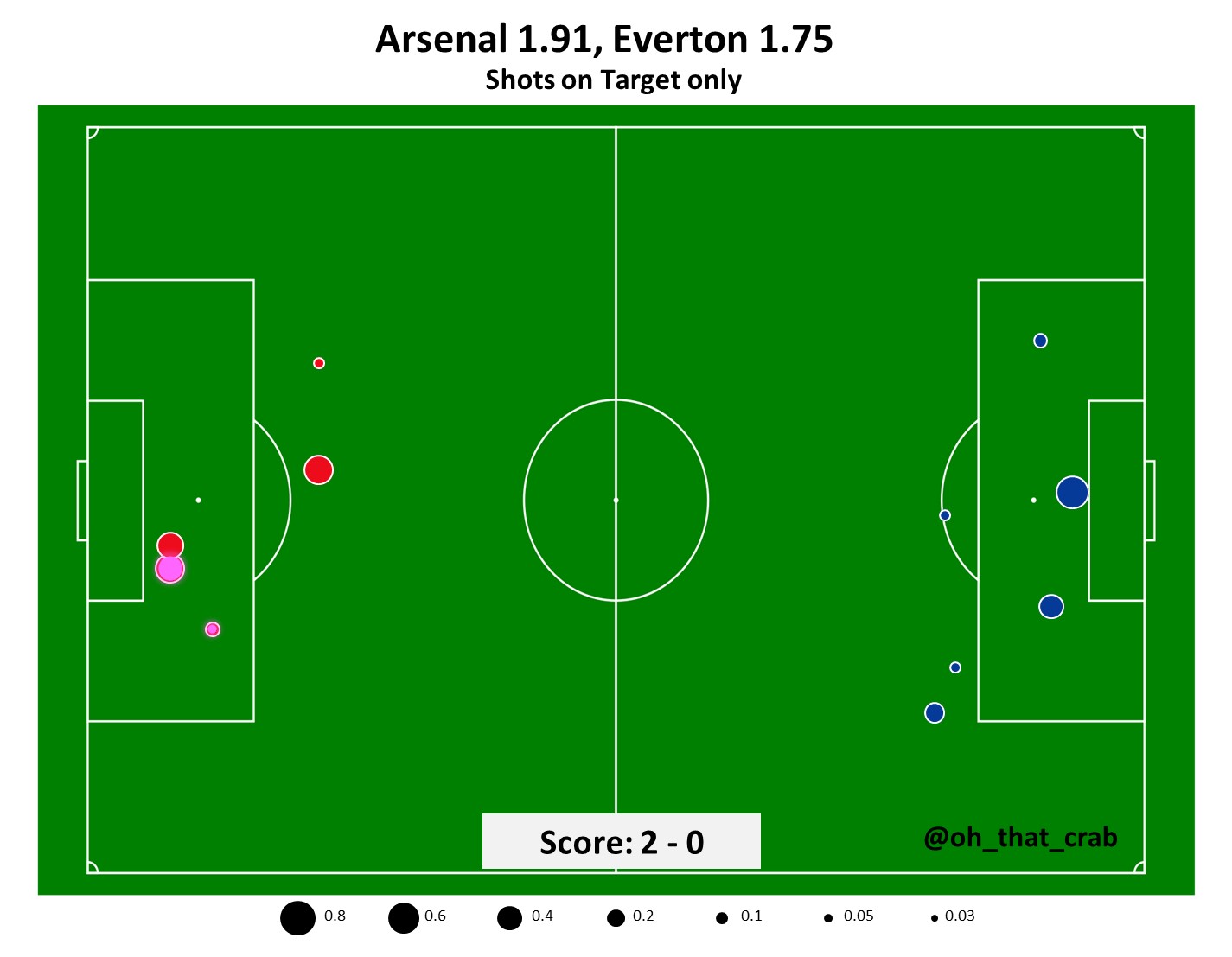 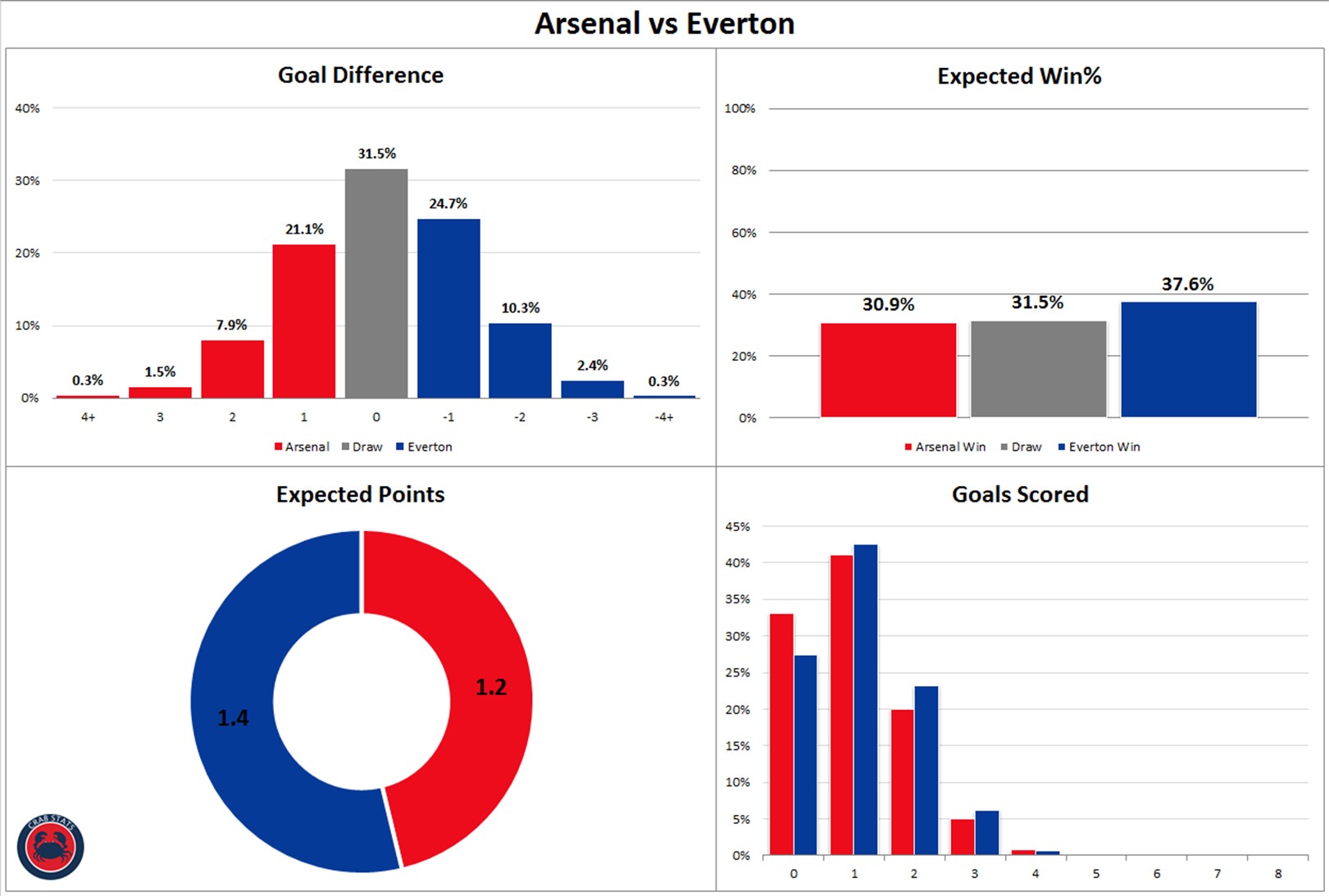 6 – Shots on target allowed against Everton

35 – Shots on target allowed in the Premier League, 5th most among all teams.

26 – Total saves from Peter Cech in the Premier League, 4th most among all teams.

Everton put 67% of their shots, on target in this match (average is about 30%) and also produced a number of dangerous moments that because of Petr Cech (and some bad decision making) didn’t result in shots. In short it was a busy day between the posts for Cech and he really delivered.

Cech has been heavily criticized for his passing this season but he has really had a good season when it comes saving shots, especially considering how much pressure he is being put under by the Arsenal defense.

Based on the shots allowed Everton would typically have scored in this match over 70% of the time, looking at just the shots on target that number is 91% of the time. A congratulations on a hard earned clean sheet are in order to Petr Cech who should be the well deserved man of the match.

21 – First half touches for Mesut Özil, third fewest among Arsenal players (Ramsey and Lacazette with less)

0 – First half passes into the penalty box completed for Mesut Özil (1 attempted).

-0.01 – First half Offense Value added for Mesut Özil, tied for 2nd worst among our outfield players.

Against a team that has less talent than Arsenal but will still attack at home is the exact match that Mesut Özil has dominated in his time at Arsenal. In this match he really struggled for long stretches and when Arsenal couldn’t do anything in the first half he was very much missing in action.

He ended up doing better in the second half of the match as Arsenal were able to get some control on the match, but it was still one of his worst matches of the season statistically. It is really hard to figure out what is going wrong with Arsenal’s attack, but the shoehorning of the attacking players into positions that are not natural should be a leading theory. Unai Emery has to figure out the best way to use the attacking talent at his disposal for Arsenal to have any chance at a successful season. 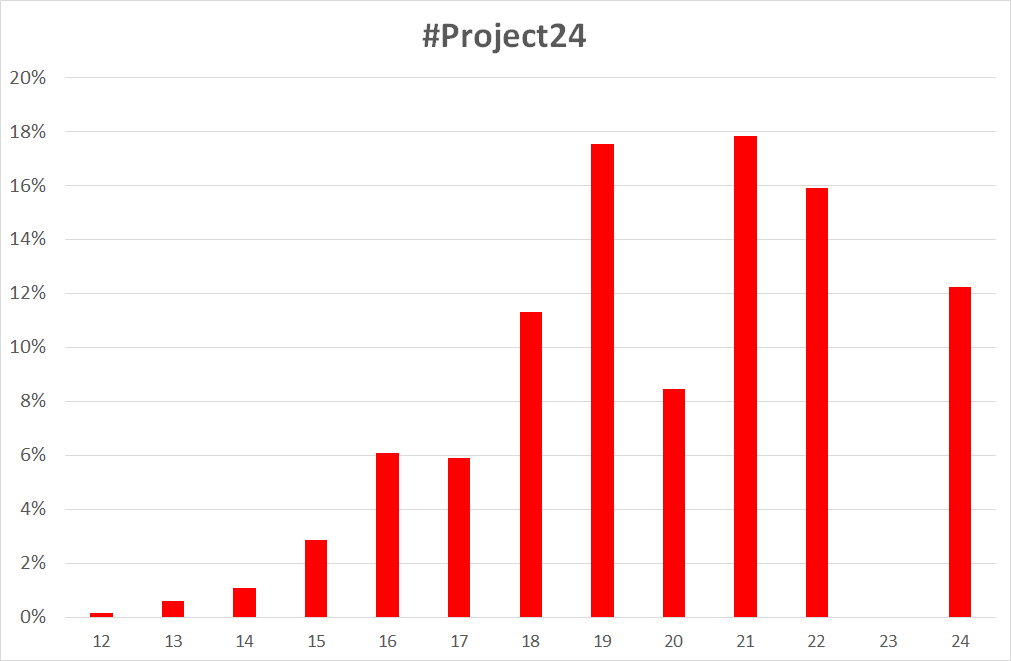 After the Chelsea match, Clive @clivepafc from twitter and the Arsenal Vision Post match podcast coined the term #Project24 for the next eight matches that Arsenal have. Arsenal have collected 12 points so far from the possible 24. Running my simulation getting between 19 and 21 points is the most common occurrences. Getting the full 24 points has gone from just over a 2% chance to over 12% now that Arsenal are over half way there.

Getting the full 24 points from these matches would go a long way to putting Arsenal in contention for a top four spot this season.

Scott, the NY Times had a long article about a “packing” stat. How do you measure the offensive contribution of defenders? I think xG chain suffers the usual problem that it is too removed from the run of play and how often defenders can switch defense into attack.

That’s where xGbuildup comes in. it removes goals and assists from the equation and allows one to better assess the role of non-attackers (or at least players less involved in that final pass/shot) in progressive play. Still think packing is interesting but not entirely sure we know how it connects to xG-based metrics.

A far better explanation (with some included tables from the top leagues) can be found here: https://statsbomb.com/2018/08/introducing-xgchain-and-xgbuildup/

Interesting to see Iwobi topping the league xGBuildup list there. He’s a proper continuity player a la Rosicky and deserves to get more game time.

In other words, we got lucky.

I was surpised for a sec when I saw the xG stats. The data shows a weakness of the measure as Cech made the excellent stop in the first half when an Everton player tried to dribble around him.

But useful in most cases anyway

There were at least two of these moments I think that were very dangerous but didn’t end up in shots. The Calvert-Lewin chance you mentioned and another one, I’ll have to go back and watch to remember the specifics.

Did the 1v1 that left Theo with the shiner register as a shot?

0 – goals against is the stat that makes me happiest (though we were lucky we didn’t concede).

26 – saves by Cech is the one that makes me the least happy. I’m glad he did but he shouldn’t have to be faced with so many to save, the defence (and midfield) needs to get tougher to stop them.

Apparently Garth Crooks went in on Lacazette for his “spine chilling disco jig”. It’s honestly amazing. I’m still laughing about the inanity of it

Smell my cheese you mother!

I agree with regards to the attacking element of the team not looking as fluid as it could but I honestly think it would improve with choosing one from Ozil and Ramsey, then whichever one is not chosen is replaced by Iwobi to provide some width!!

I have long held they’re like kryptonite to each other. They just don’t fit on the same pitch at the same time. They both play better without the other. I think there are too many similarities in the kind of space they try to occupy, but too many differences in how they use it.

we need to tighten up our team D. Cech’s been amazing but our keeper shouldn’t be this busy if we have serious aspirations of the ole top 4 trophy!

Thanks for the stats, great job as always.

First if all, I love the xG running charts. I find tgem most descriptive whenntrying to demonstrate the dinamics of a game. That being said, in this particular case there is something I don’t understand. The one-on-one frim the 2nd minute for Evertin counts for… 0 expected goals!? Probably because it is not counted as a shot? This is weird. Also, it is strange fir me to count Richarlison’s shot frim the 29th minute as 0.03 xg. Yes, it was from outside of the box, but he had a clear sight, no defenders in between, and also the shot was… Read more »

I find it a little interesting that 7 wins and a defeat is more probable than 6 and 2 draws. It makes sense when you think about it.

Cech yourself before you wreck yourself