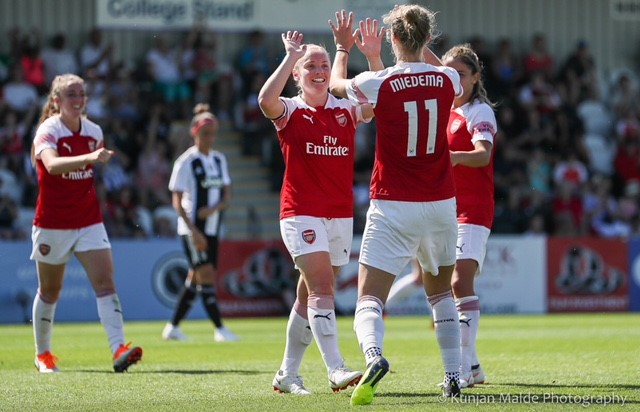 THE LOWDOWN
Arsenal Women continue their WSL season with a home match against West Ham United at Boreham Wood on Sunday. The teams played one another in the Conti Cup group stages back in August, the Gunners running out 3-1 winners with two goals from Katie McCabe and one from Beth Mead.

The goals from our Continental Tyres Cup opener at @ArsenalWFC on Sunday. pic.twitter.com/Sz8IwON91U

Since then, the Gunners have gone from strength to strength, thrashing Liverpool 5-0 on the opening day of the WSL season, shellacking Lewes 9-0 in the Conti Cup and on Wednesday evening, they gave Yeovil Town a delightful 7 goal shoeing. But they are unlikely to rack up a cricket score against a strong West Ham side who battled to a 0-0 draw with last season’s 4th placed team Reading on Wednesday.

West Ham bought some very good, seasoned players during the summer as they built for life in the WSL- Jane Ross, Becky Spencer, Gilly Flaherty, Claire Rafferty and Kate Longhurst have all won the WSL more than once with other clubs. But with 21 goals in their last three games without reply, Arsenal will be confident and remain heavy favourites to win the match.

TEAM NEWS
Arsenal continue to monitor Lia Wälti, who took a bang on the ankle at Lewes and Leah Williamson, who was a sub at Lewes and Yeovil after an ankle problem of her own. Jess Samuelsson has completed 90 minutes twice in a row after 11 months out with a foot injury and could be a candidate for rotation.

Sari van Veenendaal has been carrying a minor knock and will likely continue on the bench. Dan Carter, Tabea Kemme and Viki Schnaderbeck all have knee injuries that will keep them out for the foreseeable future. Kemme has started training on the pitch again, but won’t join full contact sessions for a few weeks.

LAST TIME OUT
A pair from Katie McCabe and a header from Beth Mead were enough to see off West Ham at Meadow Park in the Conti Cup in August. Since then, the Irons have comfortably beaten Lewes (4-1) and Millwall (4-0) in our Conti Cup group, before drawing 0-0 at home to Reading on Wednesday.

For their part, Arsenal hammered Yeovil 7-0 on Wednesday evening, with goals from Kim Little, Jordan Nobbs (2), Vivianne Miedema (2), Katie McCabe and Dominique Bloodworth. The victory took the Gunners to the top of the WSL on goal difference ahead of Birmingham. You can see the highlights here.

PLAYER TO WATCH
Having watched midfield colleague Kim Little score in her last 5 games for club and country, Jordan Nobbs will have been relieved to get off the mark for the season with two goals against Yeovil, one of which was a trademark Nobbs thunderbastard from range.

Jordan’s job is about far more than goalscoring, the more jet propelled yin to Little’s insouciant yang, the “Little Nobbs” partnership has Arsenal motoring this season. Now Jordan ‘has her eye in’ for the season, she will be hungry for more against Scott Beard’s new-fangled West Ham team.

The missing comma in this @guardian_sport team box from my report on @LewesFCWomen v @ArsenalWFC makes for amusing reading… pic.twitter.com/DgfTsWzP0b

?@ArsenalWFC’s Kim Little has the best pass completion rate of any player to make 50+ passes this season (93.8%) pic.twitter.com/LgNgwnoL5W

HOW TO CATCH THE GAME
The match will be streamed live at WSL’s official Facebook page from 2pm on Sunday. Tickets are also available on the turnstile at Meadow Park at £10 adults and £5 concessions. For more information on navigating games at Meadow Park, why not check out my beginners guide? I am lobbying for Arsenal to show the game in the concourses at the Emirates prior to the Everton game on Sunday too, but we will see!

COMING UP
Since I won’t be at this game, there will be no player reaction on the site on Sunday evening. However, I do have a feature interview with a difference lined up for October. The girls don’t play next weekend (with 11 teams in the league, someone always sits out two fixture rounds a season), but we will have comprehensive build-up to the next match away at Chelsea on Sunday, 14th October.

Let’s keep up the outstanding start to this year’s WSL campaign!
What impresses me most is how many players have an eye for goal; we are not reliant on any one individual. Coach Joe certaintly had a plethora of options.
When everybody is on top form, I believe our team can be more than a match for the likes of Man City and Chelsea.

We’re full of confidence, so although it will be a tough match, I fully expect a convincing win but I pray for no more injuries.

Good luck with the lobbying!