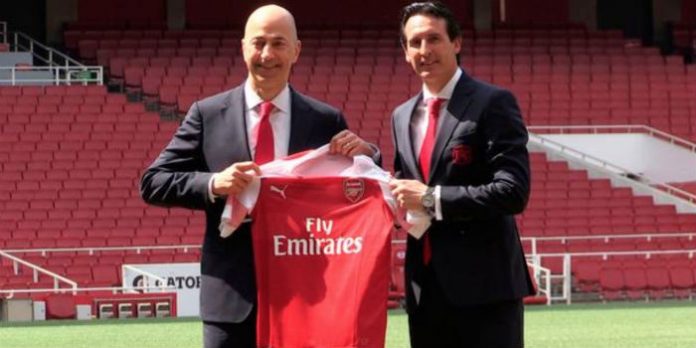 Unai Emery says he only talks to Ivan Gazidis about Arsenal matters and that he has no idea whether rumours linking the Gunners CEO with an impending move to AC Milan are true or not.

After shuffling Arsene Wenger out of the club in May, Gazidis recruited Emery as the most high-profile hire of a restructured football hierarchy at the Emirates. The 53-year-old made a big song and dance about how impressed he was by the Spaniard’s pedigree and together they appeared to be laying the groundwork for a long-term working relationship.

Those plans appear to be in tatters, with news coming out of Italy that Gazidis is on the cusp of securing a significant pay increase to move to the San Siro where he’ll be charged with sorting their complicated financial situation.

Asked about the rumours in his pre-Newcastle press conference, Emery said: “First of all, every conversation with him is speaking about us and about our work here every day. I don’t know any other news from him.”

Pressed on the subject a second time, he added: “I answered this question and every conversation with me is speaking about us. About our performance. About our ideas. Our process. Then, for his future we didn’t speak. I think it’s one question for him.”

Aside from sightings at the odd game, Gazidis has cut a very low profile figure since reports linking him with Elliott Management, the US hedge fund that owns Milan, first broke in July. There have been suggestions that the lack of clarity on his future is starting to aggravate senior staff in Highbury House.

So far Emery seems to be batting the questions away with good grace, but privately, you can imagine, he’s probably irked by the situation.

Gazidis is looking for more pay from Arsenal.

And if he isn’t he should have gone weeks ago.

Milan want him for what he is good at. Financial management. Running a football club is a whole different business, one Gazidis is evidently not very good at. So, good luck to him and, more importantly, good luck to us because the gap with the other to 6 sides he leaves behind will be very difficult to close.

They should get Wenger then

Only arsenal can have a transfer saga over a staff member

George
Reply to  A Different George

Haha – exactly. Some of the other cases have been pretty high profile even.

I’m sure he’s going. Too much smoke now. Not sure how I feel about it but the thought of a Kroenke being CEO is terrifying to me.
Still, it might bring Raul a bit more to the fore.

Maybe its Milan’s turn to compete with Bayern Munich….

Short sighted by Gazidis.
Elliot will stabilize Milan then flip it. His fund don’t want to be running football clubs, they got it from default of a loan.
2 or more years Gazidis will be out of a job when the new owner installs his own person.
Or he could have stayed and built up this club again and restored some pride.
But not staying says something about his character which means we are probably better off without him.

Well they did say they needed to cut the wage bill… This will do it significantly.