Arseblog News – the Arsenal news site
Home Matches and team news Europa League Emery: We have to get fans up for the Europa League
Facebook
Twitter
WhatsApp
ReddIt 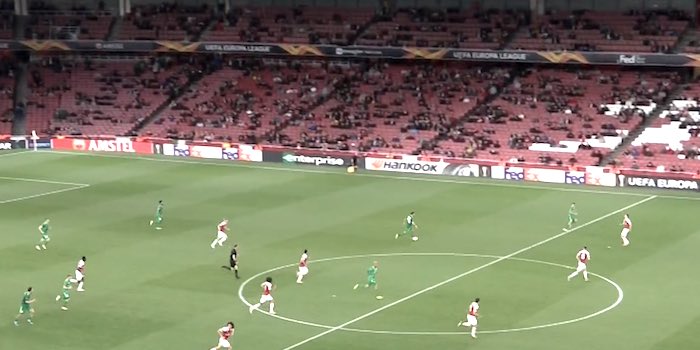 Arsenal got their Europa League campaign off to a winning start, beating Ukrainian side FC Vorskla 4-2 at the Emirates last night.

However, the quality of the opposition and general lack of interest in the competition – at least at this early stage – made for a very low attendance, illustrating it wasn’t simply Arsene Wenger apathy that contributed to low crowds last season.

The stadium was conceived and built to help consolidate the Gunners as one of the biggest clubs in Europe and the Champions League, so it highlights the job ahead for Unai Emery and the club itself to get us back there.

The Arsenal boss was asked about the attendance last night, and said it was up to his team to get fans excited and willing to spend their Thursdays watching football against relatively lower-quality opposition.

“But I think it’s step by step. I am sure they are going to come, little by little, more supporters here with us.

“But also, it’s our work to bring them here.”

Goals from Pierre-Emerick Aubameyang, Danny Welbeck and Mesut Ozil put Emery’s men 4-0 up with less than twenty minutes to play, but some carelessness at the back saw the visitors get two back before the final whistle, and the Spaniard is urging his men to stay focused from first whistle to last.

“We are speaking before each match to take a mentality of ‘don’t concede chances easily’,” he said.

“I think today is a good opportunity for not accepting goals, but the last 30 minutes, we needed to be better on this competitive aspect.”

Who was your man of the match? Check out our ratings and rate the players yourself.

So many spaces in the crowd. The only consolation us that I bet lots missed the final goal as they went home early.

So many spaces in the stated crowd of 59039. Maybe Ticket Exchange rules need to change to allow for general sale? STH pay high prices and have the right to show what they think of poor level of opponents but should be able to ensure those who moan about getting hold of tickets can do so. League Cup attendances have been better due to those games not being part of season ticket.

Tickets were on general sale for £15.50 for this match. The only reason i didnt go is that i play 7 a side on thursday nights. That being said i will more than likely go to the next match as it will be a good chance to take my son to his first game

Will go to the next home game to watch that team in the flesh. They played at a very high level considering how few starts they’ve had between them over the season. Really excited to see how they do. We will get to a point where the first XI is trying to break in to this team!

In the not so distant past we had average players or just better but we’d show up in Europe. Teams with Song, Denilson, Bendtner, Adebayor, Diaby, Fabregas etc. We’d put six goals past a very strong Porto team at home or a shakhtar. We weren’t winning it but it was fun to watch and something to look forward to. Then we sold everyone, got smashed 8 at OT, bought half a team in two days to steady the ship and started struggling in Europe. Lost more of the remaining better players, consoled ourselves with the new project. “British core” and… Read more »

On paper I don’t see much difference between Arsene’s teams in those early Emirates years, and in his later years. There were some really good players in their peak like Fabregas or van Persie, even Sanchez, but there were also those who just didn’t cut the grade. There were phases of brilliant football – beating AC Milan at San Siro, beating Barcelona in their own game, that time we came 2nd or 3rd, I don’t remember, and were doing really well till someone broke Eduardo’s leg and we lost the title by 4 points, that season when Rambo was playing… Read more »

Wenger was always 2 to 3 quality (experienced) players away from competitive in second half of tenure. In later reign he was about 1 player away until he let slip in the Cech year when we failed to build then it slipped away completely.

True. But also, credit to him for consistently securing top 4 AND coming above Spuds each time in spite of Denilson, Song and Bendtner. That man is a genius!

I would love to attend every game but then life hit me in the face with a job and two small children.

When we played CL football all our fans must have been single and unemployed.

I hate it when people say the team has to convince the people to support them. I know that’s what you have to say as a manager so no offense against Unai but it should really be the other way around. That’s why it’s called “supporters”. The fans should push the players to top performances and not the players should encourage the fans to attend games. The attendance and the atmosphere was embarrassing yesterday. They are always saying the fans deserve so much more than what they’re getting from the Arsenal but to be honest, they don’t. They deserve exactly… Read more »

It takes two to tangle.

So? Haven’t the fans asked for change? Haven’t things changed? Have we won 3 games in a row before yesterday? Haven’t the players gave a lot since Unai took over. Arsenal ran the most kilometers in the whole league so far, so complaining about players who don’t give their best isn’t an excuse, too. Haven’t the fans asked for Torreira to start and when he finally does he’s playing in a half empty stadium. Do you think that’s the kind of help from the fans that’s needed to fight for bigger trophies in the future? Or do you mean the… Read more »

The problem with our beloved Arsenal goes deeper than Silent Stan and an inept Board. We Arsenal fans are part of it.

Yeah Bro, shame on us the supporters. Are we now against Kroenke or the Board? Or we just don’t care about the Europa League? These players need our support.

If you’re a paid up ticket holder, I don’t demand your presence in the stadium to prove your “fandom”. No fan wants to stay away from games having paid for them. If they are, the owners of the club can take a long hard look in the mirror to find out why. If they’re also struggling to understand why fans are so un-fanlike, I have two helpful suggestions – 1) re-think the anti-competitive restrictions placed on sharing of season tickets between fans and 2) if you keep ticket prices at the highest levels in world football, fans will not settle… Read more »

Why not let all under 16s in for free with an adult for the group games. It would add a lot to the atmosphere instead of us grumbling auld ones every week!

Be careful of what you wish for. Not too long ago some clamouring about falling out of top 4 so we can win a trophy with the europa. How foolish this looks now AND back then. No guarantee we can win europa league either and what a lowly cup compared to participation in the CL even IF we get knocked out by Bayern or Barca in second round. Pundits derided the “top 4 ‘ trophy but now champion it conveniently. We simply MUST get back into top 4 this season and CL or it will further complicate rebuilding task. Of… Read more »

The attendance was just not good. It was embarrassing. My take.

The attendance last night was better than the group stage last season. I follow the team no matter what the competition is or what the team selection is.

But the 8pm kick-off means that the game finished at earliest 9:45pm. Giving me 20 minutes to get to Liverpool Street for my last train home. That’s just not happening. Until we can kick off earlier or greater anglia (and other respective train operators) enable fans to get home, the thousands of fans leaving 20 minutes before the end really have no choice.

If that many season ticket holders aren’t going to show, rejigger the arrangements for the early rounds and cup matches. General Seating – Season ticket holders get to fill the centerline sections first come first serve, and general seating for the rest. Incentive to give a shit.

Or if you skip 3 rounds without making resale arrangements you lose priority for the later rounds.

That many empty seats when there are plenty out there that would love to see the Arsenal play is shameful.