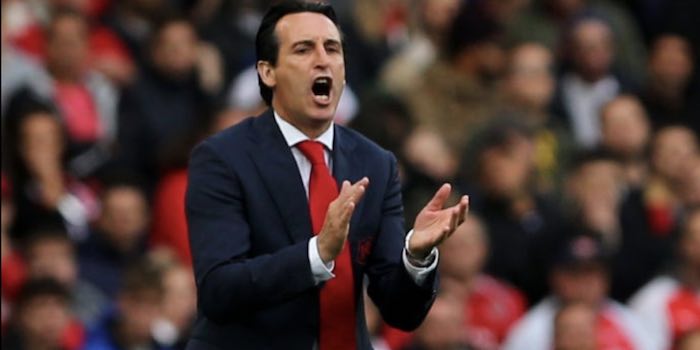 One of the features of Arsenal under Unai Emery is the relatively indifferent displays we’ve had in the first halves of games.

The Spaniard has made half-time substitutions more than once to try and change a game, and done so effectively in fairness, but seven games into the new season the slow start issue is becoming a bit of a concern.

It’s something Emery acknowledged in the wake of the 2-0 win over Everton yesterday, particularly as the visitors had good chances to score and but for man of the match Petr Cech we might have found ourselves in trouble.

“We want to control the game more in the first half, because we didn’t have the ball like we want,” said Emery afterwards.

“We conceded two or three important chances to Everton, but in the second half we spoke in the dressing room about stopping their attacking moments with better positioning on the pitch.

“Also, individually, each player helped to push more in the second half. I think we only conceded one chance from a free-kick which Petr Cech saved very well and there were no more.

“In attacking moments, we played well in 20 minutes to win this match and in the last minutes we defended very well near our goalkeeper and in our box.”

The Gunners did much better in the second half, scoring twice and controlling the game subsequently to the point where Marco Silva’s side were nowhere near as threatening as they were in the first 45, but coming out of the blocks quicker and more aggressively is undoubtedly another addition to Emery’s ‘To Do’ list.

Was a failing under Wenger too. Good that he is on the case.

Yep, and often they didn’t come out with enough of a kick up the arse in the last couple of seasons. Emery seems to really have a good half time team talk, judging by the intense energy levels in the second halves of games. Hopefully we can start to dominate from the beginning, it can totally demoralise the opponents, City do this well.

By the way, I’m loving this new look iwobi, really good for it, good lad.

Iwobi is the closest we have to a wide player.

Why we sent Nelson on loan is beyond me.

This is an unbalanced team not help by our purchasing since January.

I’m no manager but seeing as netiher Ozil nor Aubamayeng stay out wide. Why can we not set up in a diamond with torreira at the base and Ozil at number ten?

Because we would still lack width.

The one big positive from our 4 pl wins, is there is so much more scope for improvement. We could defend better, play out from the back (and succeed in beating a high press) better, have better balance in midfield and in the attack, control games and start games better. So we could become a way better in the months to come. I for one am optimistic, that with continued improvement, this team could reach the top 4, and win a cup trophy to boot.

No one has really mentioned from yesterday’s game that we did not have one ‘incident’ playing out from the back. That alone is a big plus point for me!

I love Emery, really hope the board back him. I can see quite a few first team players making way over the next few windows. I said it in the summer that we should have sold Ozil and one of Lacazette or Aubameyang… and got nothing but abuse…. But we didn’t pay Ozil £350k p/w to play out of position on the right. And we didn’t pay £57million for Aubameyang who’s a 40 goal a season No9 to play him as a left sided midfielder, he won’t be happy playing his best years in a position that doesn’t get the… Read more »

Personally I reckon that if you’re paying a player £350k p/w he’d be expected to play wherever you fucking tell him to.

So you still think we should sell either Lacazette or Aubameyang?

I think he should play Ramsey in midfield against Brentford so that he can remember what that’s like.

We don’t have the right assets. We are unbalanced. Ramsey and Ozil frankly play the same role and are best in the same position. Aubameyang is best in the same role as Lacazette. Whilst he can play from right, he does not protect the ball enough for me and tends not to be able to take it out from the back or cushion high balls to him. Contrast Iwobi when he came on and how much more he holds the ball. Also in means Monreal gets less protection with Aubameyang. It also feels we are trying to fit players in… Read more »

But Brentford would prefer to play Mhkitaryan if fit. Get him going again.

Not sure the defence would thank him

One paper was suggesting that we were in the title race. For 5 minutes we might have looked like that but not for the other 85. But putting Cech under pressure looks like it’s taken 10 years off him, what a great performance.

Well we needed to stay within 6 points of leaders which we are after 6 games.

Don’t buy into this nonsense from the pundits that Emery has 3 years to get it right.

He needs to get us into CL this season.

He knows it and he had to game 7 to get us within competitive. Its starting to come together.

We need to find solutions now and keep improving defensively.

We really need to stop crosses and shots.

Everton had the same amount of shots as us.

That’s true but we had class players taking the shots. Just need to learn how to defend.

Worth noting Everton are robust opposition and have some excellent assets in Walcott, Richarlison. They were very aggressive and some of our players were not as fully committed defensively.

Worth noting whilst everybody wanks off to Torreira that Granit had the most touches in the team and no surprise that we came down our left more often bc of his influence there.

Torreira was good but also made several mistakes including the gift of a free kick at edge of our box close to end of game.

How these two players can continue to evolve together will be interesting to see. Understanding between them (and Guendouzi as well in the mix rotating into the midfield two) is key.