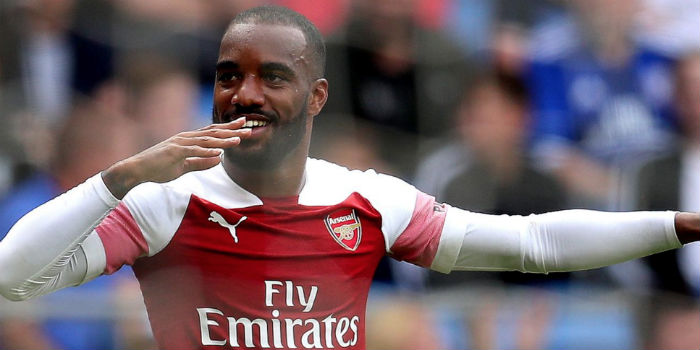 Alexandre Lacazette says Arsenal are “learning like children” as they tentatively get to grips with Unai Emery’s football philosophy.

The Gunners have conceded a number of chances in their opening four games as a result of mistakes made attempting to play the ball out from the back, however, the Frenchman insists he and his teammates are improving week-on-week.

After defeats in their opening games against Manchester City and Chelsea, wins against West Ham and Cardiff have steadied the ship at the Emirates and given room for optimism as the players head off for the Interlull.

Speaking after his match-winning performance in the 3-2 win over against Neil Warnock’s Bluebirds, Lacazette remarked that he and his teammates are playing entertaining football, albeit occasionally error-prone.

“We learn a lot but the manager says if we do this kind of thing [defensive mistakes] we can concede a goal,” he reflected.

We did make mistakes because we are learning, like children. So it is OK, it is good. We will be better week after week.

“Overall it has been good [under Emery] even though we had two losses. They were against the two champions of the past two seasons. The quality of the games, it is good. Everyone can take pleasure to watch us play.”

Having struggled on the road in 2018, it was important to pick up points in the Welsh capital, something Lacazette also acknowledged.

“This season we want to be better away and it was the first game we won and I hope it will the first of many until the last day of the season,” he went on. “It is good and important to win away.”

Glad Laca busted through for that superb corner shot. A happy Alex is huge for the team. Nice positive spin on things. Weird phrasing but could be a language faux pas. The crux of it is that players seem to be enjoying a bit of coaching. Will this complaisance last long, though, I wonder… and who isn’t a fan of a bit of coaching on the team, I also wonder. Also a very French way of looking at the big picture, reminding us that in the end this is all just entertainment, and should be a form of pleasure. Vive… Read more »

But he looked powerful against Cardiff, and some of his touches were sublime, it’s the type of reaction you want to see from a player who’s started on the bench for 3 games.

I wasn’t so impressed by him last season.

There was a reason why Giroud was starting ahead of him in the National set up.

This season is different. He has renewed vigour with the new gaffer and has learnt to hold and distribute the ball better.

Arguably he is the better candidate for the role up top now if we don’t need to mainly hit on the counter.

Some excellent flicks and quick passes. He is taking a page from OG and acting as a node for the team.

The reason Giroud started ahead of him is that Giroud meshed much better with an attack that went through Griezmann. In effect, although not directly, it was Griezmann who was preferred ahead of Lacazette. Which is a little different.

Like a lot of foreign players that join the PL, it sometimes takes them a season to adjust to the demands and physicality of the teams in this league. Hopefully that is the case with Laca (and Aubameyang too), and he bangs them in all season long!

I was also unimpressed with last season, but he maybe looked like he lacked clear instructions… Not only against Cardiff, but in other games he has looked stronger and more aggressive than last season, I hope it continues and he becomes the player we all hoped he would be.

He’s a great addition to this team and this squad. I love his movement and his power. He reminds me a little of Kevin Campbell in that regard but I think he’s a better all around player. I can remember the first time I saw Super Kev back in the day. ‘Who’s this lad?’ I thought as I admired his incredibly muscular thighs. Thighs which I could only dream of as I’m a very lithe individual although what I lack in physicality I make up for with the kind of suppleness that a ballerina could only dream of. I think… Read more »

I admit I belly-laughed at this, but it was 50% because I thought it was funny as hell, and 50% because I can’t believe how stupid it is. Well done.

we all missed you pete!

Unai are meant to be together
Reply to  Rambling Pete

Oh Rambling Pete….. You have been sorely missed

We all love a bit of rambling Pete

Thank you, Rambling Pete. Thank you.

Without meaning to sound in any way against Wenger but did they not learn anything in the past two years. Shows that Emery has a massive job on his hands and needs time

It’s widely known that Wenger was an advocate of freedom of expression. We look like we have an actual plan now, just that we aren’t that good at carrying it out yet. (Also it’s hard to press when the opposition give you 72% of the possession but I digress)

The down side of this though is we’ll probably see less goals like Wilshere vs Norwich or giroud’s scorpion because those goals couldn’t have possibly been planned.

The problem is defensively where Wenger did not pay sufficient attention to details.

You know what I never understood about Wenger. I am guessing we majority played with that expression of freedom and the results we all know. BUT when we actually do take into account the opponents and apply our tactics accordingly, we do extremely well ( man city and Barcelona come to mind)

Why didn’t we just do this more often I’ve no clue.

db10s, Because Arsene rarely made any adjustment to our opponents – After that 2-0 win against City it was claimed that the players themselves talked about tactics and how to play against City.
The guy was a dinosaur in this sense – no use of video analysis, no tactical planning… It’s nice having someone who cares about those aspects of the game.

A Different George
Reply to  Tusikon

“No use of video analysis, no tactical planning.” Seriously?

There’s been a lot of talk about how Emery has failed so far to tighten us up defensively & that’s fair….but I think what some are overlooking is how dreadfully dull we were in attack in Arsene’s last season or two, particularly away from home. 5 goals in 2 away games is impressive. We’ve not been bad at all going forward. Laca really deserves his starting spot at this moment in time.

Santori
Reply to  Kwame Ampadu Down

We don’t finish to put away the opposition. We tend to be too nonchalant.

It means the opponents will have opportunity to build back their confidence and get back at us.

It is STILL a problem.

Don’t be so easily fooled by last two games. Granted we are better but they are against two generally struggling teams in the league.

I specifically said 5 goals in 2 away games, Chelsea are not a ‘generally struggling’ team in the league. Look at the pathetic number of goals we scored away from home last season & it is clear we have improved.

Auslaender
Reply to  Kwame Ampadu Down

Fully agree Kramer, after many years Arsenal starts to feel fun to watch again, making chances and combining fast. I’d be happy just with that for this season.

A Different George
Reply to  Auslaender

Yeah, but what do Elaine and George think?

Matteo
Reply to  Kwame Ampadu Down

Totally agree. Strong in attack and dull in defence is sort of ok….for now. Look at Liverpool of last season. Their strategy was to simply outscore their opponents, and they played to their strengths. A win by 1 goal is a win nonetheless. I guess, though, they DID have Karius in goals, so that didn’t help their cause.

We are a lot like early Liverpool and Man City when the new manager came in. Hope we follow the same trajectory and start to challenge for the title starting next season.

Laca is reacting exactly how a professional top player should, diggin deep and coming out super motivated to prove his case. Özil has plenty to learn from him.