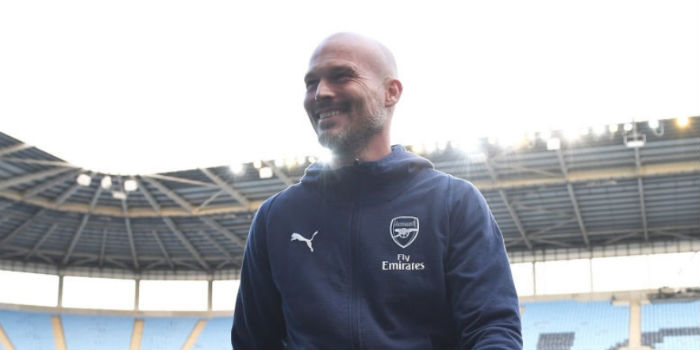 Last night, Freddie Ljungberg took an under-21 side to face League One Coventry City in Arsenal’s debut in the Checkatrade Trophy.

His young Gunners, courtesy of goals from Emile Smith Rowe, Eddie Nketiah and Joe Willock, ran out winners 3-0 victors at the Ricoh Arena and afterwards, in an obviously buoyant mood (ignore the above terribly timed screenshot), he faced the media. Here’s what the Swede had to say.

On playing in the Checkatrade Trophy…

“I fought quite hard for us to be in this competition because I think it gives players experience of beating grown men.

“It’s different, you see that when the tackles go flying in and the fans are cheering. That’s what happens in men’s football and they have to be ready for it.

“We’re not always the strongest players on the pitch, you have to use your technique in different ways. They learned a lot tonight and that’s great.

“This is a very important competition to be a part of for young players to get a touch of first team football.

“We send them on loan but then we can’t coach them at the same time as they play against first teams, I can do that here. It’s great for me.” ”

On his relationship with Unai Emery…

“We speak every week, talk about players, what we’re thinking. He’s very open, which helps me a lot. Of course, I have my own way of how I want to play and he never tells me how to do that. But we’re quite similar regardless.

“I just want to prepare them so they’re ready when they go up to his training. He worked them really, really hard this summer and they’re very fit. My boys need to be ready for that.

“He’s an open manager and a nice, respectful man. He always asks how they’re doing. We had a few staff from Arsenal here today to look at them, it feels great for me that there’s interest from above.”

On life after Arsene…

“Arsene was like an extra father figure for me. We should be grateful for all the things that he has done, he decided to leave and now it’s something new. We all want to strive to make the club better.

“There are new ideas coming from above and maybe I have some ideas that we can use. We’re just trying to develop the club.”

Great guy, a bargain buy for us still giving back.

Too early to say he’ll be a future manager but he’s intelligent enough and cares.

It’s great giving the kids this experience, but it’s potentially killed off the need for big clubs to loan out youngsters. Good in the sense we can continue to coach, but can’t help but feel it’s good to get out and experience different cultures and training methods. Still- 3-0 against a league one men’s side is a seriously impressive result. Can smith-rowe or any of the other youngsters play on the right? Feel like that’s one of one biggest problem areas at the moment, and now with Nelson off on loan there’s definitely space for someone to challenge mkhi/ ozil… Read more »

I don’t think playing in a few checkatrade matches a season kills off the loan system.

Yeah but how many of our players who’ve been out on loan ever come back to become established first-teamers? Very few i reckon

To be honest I think the days of loaning are coming to an end, or at least going to change massively.
This is probably a precursor to seeing B teams in the leagues, it’s been talked about before but I think it’s closer than ever

Rich clubs clean the market off top talents, loan them out, the few that make it are then welcomed back. That is a completely different strategy, 1 that comes from taking advantage of excessive wealth to strap opponents from the often more genuine opportunities and approaches. We do it to some extent, but with solid defence i. our genuine ambition to grow our own stars, like Kingberg describes.

Are these checkatrade mathes streamed via the club’s website? Or any ither site for that matter?

I think they concentrate on football on the club’s website, not doing arithmetic.

Anything else wouldn’t add up.

Superb sentiments from Freddie, what a great guy to have guiding our youngsters.
The Checkatrade gives our boys the kind of experience that our youngsters once had in the old Football Combination, it’s something we’ve badly missed so I’m really delighted that we’re in this competition now and what it’ll give to our lads.

Freddie will make a fine first team manager some day.

Feels good to see a smiling Freddy walking off the pitch again.

Keep it up Freddie, just remember you’re not that old ?