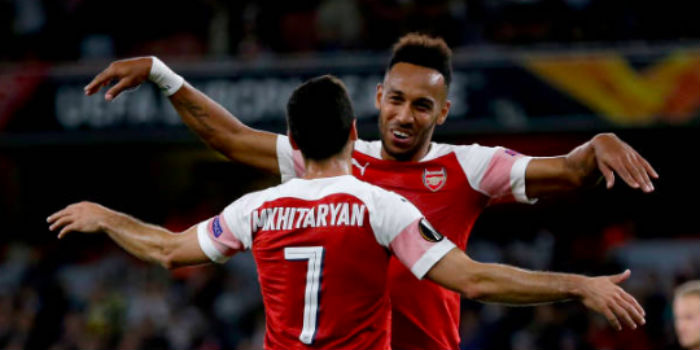 Who’d like to read some very dull quotes from Henrikh Mkhitaryan about Arsenal’s 4-2 win over Vorskla? Step this way…

Yes, after our rip-roaring, goal-scoring victory against the Ukrainian giants from Poltava, our favourite Armenian – he just pips pop princess Dua Lipa to the crown – was in fine fettle, bigging up Arsenal’s eagerness to win a trophy that they flirted with last season.

“It was an important victory and it was a bit tough in the first half but thankfully we scored before we went to the dressing room at the end,” he told press after the win.

“In the second half it was easier because they started to play football, started to have the ball and started to attack, so we had more spaces in behind their defensive lines. We could have created more chances.

“I think everyone enjoys the way we’re playing now. It’s not still the best, but we will keep working and game after game we will show better than that.

“We’re not just playing to participate,” he added.  “It’s very important because if you win then you can get a spot for the Champions League, so we’re trying to win every game and we will see where we get.”

Having played in Ukraine for both Metalurh and Shakhtar Donetsk, Micki was actually one of the only people inside the Emirates who’d heard of Vorskla before the game.

On coming up against former teammates, he had this to say: “I have some friends [in their team], but I forget about it during the game. But now we can sit together and talk with each other.”

Let’s hope the conversation was a tad more stimulating than the above banalities.

Dua Lipa’s background is Kosovo-Albanian, Andrew. And she’s English, in any case.

Very dull comments, they should just let Siri do it instead with a programmed range of comments.

It feels good to have won the last 4 matches but they have been against three of the bottom teams in the league (who have 6 out of 45 points) and a team from Ukraine who were third in their league last season. Would have preferred a clean sheet at least against them.

So let’s hope it is onwards and upwards and we are getting stronger for the bigger challenges ahead.

Arlene Francis, actress of stage and screen and panellist on What’s My Line? was half-Armenian, and actor Ken Davitian (Azamat Bagatov from Borat) is of Armenian heritage