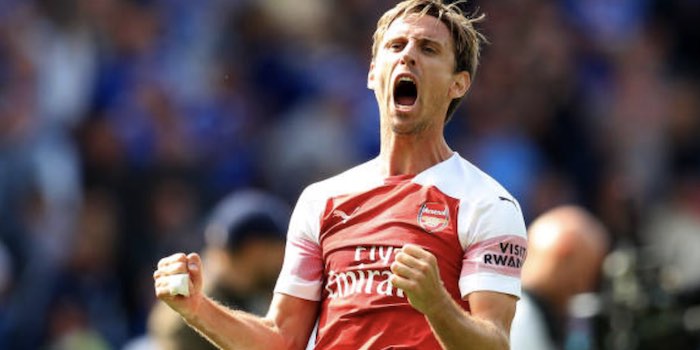 Nacho Monreal says that he’s currently in talks with Arsenal about extending his contract with the club, and has opened up about life under Unai Emery after the arrival of his compatriot this summer.

The Spanish international has a deal which expires this summer, like Aaron Ramsey and Danny Welbeck, and it seems discussions are underway to ensure he stays in red and white for a little while longer.

The 32 year old has been one of the team’s most consistent performers in recent years, and he told the Evening Standard, “At the moment we are talking with the club.

“I’ve always said I am really happy, I feel very happy playing for Arsenal. I came six years ago. I have a good relationship with them.

“We are in contact in any moment so don’t worry about that. I am happy here. That is the most important thing.”

And having begun to work with the former Valencia and PSG boss, he says he’s enjoying the differences in training.

“In training, he likes that every single player gives his 100 per cent in any moment,” he said.

“Training is one hour and a half, one hour 40, whatever, all the time we must give our best performance. If we have to run, we have to do it, don’t save any energy.

“After that, he loves that we enjoy and have a good atmosphere in the group. While we are training, it is ‘come on guys, do everything’ and after you will have time to relax and enjoy with your team-mates.

“It is good for the team. With Unai Emery, we work more tactically. He is a Spanish coach and in Spain we work a lot on tactics, set-pieces – I think we are improving in this aspect.

“This is our idea for this year – have more possession, don’t lose stupid balls in the middle of the pitch and be more compact than how we were before.”

“don’t lose stupid balls in the middle of the pitch and be more compact than how we were before.”

If he was meaning that, then he’d be a prick as well.
Thankfully he isn’t.

Rather that than be a delusional cunt,

To elaborate further, he says ““don’t lose stupid balls in the middle of the pitch” – Granit Xhaka has struggled receiving the ball while under pressure around our box or deep in our midfield, this has cost us numerous times, He also says “be more compact than how we were before” He is often wrong side of other teams attacking midfielders and struggles to track runners, again, something which costs us a lot of the time, obviously this applies to more than just Granit Xhaka but he is also far more culpable than most.

Last game Mineral was culpable for BOTH goals.

Grant made about the same number if misplaced passes as Guendouzi.

The cross field ball was a good idea to release Bellerive but mushit. It happens.

Still we had plenty back to defend the turn over.

Mineral was too easily turned by Camarasi and should have been fully aware if the empty space behind.

Slow down Santi, your cracking up.
I think I agree.

If torriera comes in I see guendouzi going out….i just don’t see the possibility of Xhaka going to the bench.. Apart from the fact that he is an expensive buy, he is the only midfielder that we have that uses left foot, Xhaka is also a leader…not even with the fact that he is the vice captain of Switzerland but he has been a leader since his early days at borussia monchengladbach….. Emery likes him alot and won’t take the risk of putting a young kid ahead of experienced Xhaka

I disagree on so many levels.. 1) If he is an expensive buy or not doesn’t matter. If this was a factor for Emery, he wouldn’t keep Guendouzi instead of Torreira 2) I don’t think that the foot matters when picking up the squad. If someone is not good enough, the foot would not save his place in the XI 3) I don’t know Xhaka personally so I cannot judge on his leadership, but it is a fact that Emery has named four captains ahead of him in the order. And we will still see some of them on the… Read more »

I get your point but I remember Emery saying Xhaka is very important to the team.. That says slot I guess

i think its more than that. there is no one in our club that plays like xhaka, even guedouzi. nobody knows how to control the tempo and keep possession like xhaka, guendouzi has the ability but he’s young and so far has not been able to do that. sure defensively he’s not that good but so was pirlo and busquets and thiago motta in emery’s psg team. guendouzi can be a better player than xhaka but only in time. so since no10 position is more or less fixed for ramsey. the only position left is fought between torreira and guendouzi… Read more »

Sensible aims – have more possession, don’t lose stupid balls in the middle of the pitch and be more compact than how we were before.

The first was a criticism of Wenger (too much sterile possession) so better would be to make better use of it. Like the second two aims, there was too much of losing balls and not enough of being compact last season.

A better aim still is to improve our away form, that was dire last season, whilst keeping the home form, which was great.

One stems from the other.

The latter, improve away from home, is an outcome. The former are actions that we can control that influence that outcome.

Basically if we control the ball, don’t do dumb shit and be more compact we are more likely to improve away from home.

To a large extent I agree, though I reckon that our away from was so bad that there is another mental component to it, ie being ‘fired up’ enough, bold (and hence not scared) or something similar mentally.

Or pretend to be at home, we were second best in the PL there last season.

No analysis of Arsenal can be correct unless it explains how a team good enough at home to challenge for the title could be so horrendous away. It simply cannot be a question of the quality of the players.

Nobody more deserving of a contract extension. A real team man, Nacho.

Monreal..mr reliable.. I love you… Hopefully one day we would see a better replacement for you

Monreal is a better player it will b very hard to find a replacement.

Worst aspect of the Interlulls … the haters cannot abide, old knives are loost, and the Wenger Out brigade kicks a man, after he is out.

“don’t lose stupid balls in the middle ” Xhaka be warned! ?

And Cech, and Ramsey, and Guendouzi, and Mustafi – shall I go on? Xhaka’s was 1 ball. Every player in the squad has had a sloppy turnover turn into an opportunity for the opponent.

I question the wisdom of giving Monreal a new deal. Yes he has been good for the last 18 months but he’s nearly 33 and was given the run around against City and I think he has been rather underwhelming so far this season (goal against West Ham not withstanding). We should be building for the future and targeting someone like a Chilwell or Tierney for the long term full back slot alongside Kolasinac. I would play him out this year and release him alongside Kos at the end of the season, which an appreciation of their efforts over the… Read more »

Agree on the Chilwell or Tierney bit, but I think it’s a good idea to keep Nacho around to help whoever it is settle in. I’d be more inclined to sell Kolasinac as I’m not sure he’s likely to be good enough defensively in a back 4. I also think it might be a good time to sell him (before anyone has realised he’s not that great defensively). I do agree though, that his defensive mistakes seem to get swept under the carpet because he’s a fan favourite. There’s been times in the last season or so that he’s left… Read more »

“was given the run around against City”

If you are talking about the first game this season, am afraid your memory is faulty. AMN started and Lichtsteiner replaced him, when he got injured. Montreal wasn’t even in England yet, I believe. 🙂

I was referring to last season but I appreciate I didn’t specify this, cheers for pointing it out.

Heh, try to name a player that WASN’T given the runaround by City last year.

This Guendouzi vs Xhaka argument is a funny one. Yes, Guendouzi looks bright but he’s inexperienced and maybe a little ineffective at the moment. Xhaka’s passing is easily more incisive than any of our other deep midfielders, which is why he has to start. He gets us up the pitch and gets the forward players on the ball and in behind the defence. Both have a mistake in them, but at the moment Xhaka is more impactful on the game, even when he’s not at his best. Torreira & Xhaka for me.

Monreal culpable for Both goals from Cardiff.

Tured too easily for the first by Camarasi and should have been aware of space behind.

Not tight enough to Ward for the second.

Why blame Granit? We had enough players to defend even when Granit’s cross field ball (a good idea) was mis-hit.

Mustafi barely made a mistake but plenty if moaning from certain people.

The only bad thing about having a Nacho is that having one makes you want more.