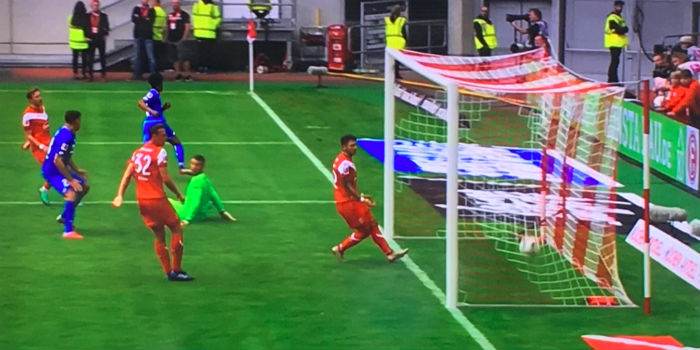 Reiss Nelson came off the bench to score a late goal for Hoffenheim, as they lost 2-1 to Fortuna Dusseldorf.

The England under-21 international came on with 18 minutes remaining and levelled the game with a lethal left foot finish. It looked like he’d grabbed a point only for his teammates to immediately concede a penalty that the home side converted.

Reiss Nelson is a baller ? pic.twitter.com/QZn11717ck

The youngster joined Hoffenheim on a season-long loan in August, after signing a new long-term contract with Arsenal.

Upon arrival, Nelson was given the number 9 shirt, and manager Julian Nagelsmann spoke highly of the youngster.

Fellow England youth prospects Jadon Sancho and Ademola Lookman flourished in the Bundesliga last season, and Nelson will be looking to emulate their success.

Nelson could make his Champions League debut on Wednesday when Hoffenheim travel to Shakhtar Donetsk.

Nice touch and finish.
Do we read anything into him having the number 9 shirt?
Hopefully he is seen as a first teamer / starter.
Interesting tha with them in the CL he will potentially be playing at a higher European level than us!
Great start.

They prefer to get their players from Dortmund–I imagine they’re really pissed about Aubameyang.

You mean pissed off!

You’ve got to admiral Nelson, one goal with one shot!

As in a great goals to shots horatio?

We’ll definitely have to keep one eye on him

Maybe devote a whole column to him.

Good stuff. I think he’s got what it takes to make it here.

I must try to catch some of their games.

Looks like Hoffenheim are getting the full Nelson this season.

As I said, we should have kept him.

We could do with an alternative on the right side for us.

Mhkitaryan is not an out and out wide player where young nelson has plenty of pace and confidence/tekkers to take on opponents.

Not sure what the thinking was there.