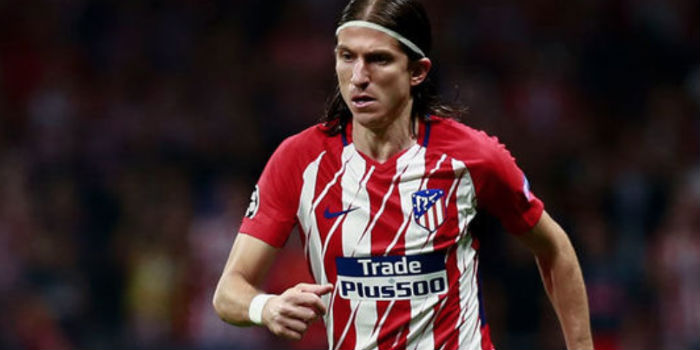 According to Mundo Deportivo (who appear to be referencing a story in The Sun), Arsenal are keeping tabs on Atletico Madrid defender Filipe Luis and could make an attempt to sign the Brazilian in January.

The left-back, once of Chelsea, will be out of contract at the end of the season and there’s a suggestion that Atletico could try and cash in rather than lose him on a free.

At 33, he’s far from a spring chicken, but he’s an experienced operator with over 30 caps for his country.

Luis’ situation mirrors that of Nacho Monreal, who is also out of contract at the end of this season. Monreal is six months younger and we like him. We like him lots.

So if we’re making a choice between the two, we’d rather give Nacho a new deal while we figure out if Sead Kolasinac is any good or not.

Partey: I want to make everyone feel happy

Can we please start talking about buying 23-27 year olds?

Like Xhaka and Mustafi? Risky at any age but I take your point on a 33 year old, will be tough to deal with the physicality of the PL.

Lucas Hernandez is being eyed by Manchester United as they look to add competition to their defensive positions. The Frenchman, who is now a World Cup winner, is versatile and can play at left-back or at centre-back – something that reportedly appeals to Jose Mourinho. The 22-year-old has a £72m release clause.’

We will always be behind if the best players are bought by Man City/United/Chelsea.

I agree with the general point you are making, but I would be very cautious about taking these “on Man United’s radar” stories too seriously. (And this particular one sounds more dubious than most: Luke Shaw is young and looks very strong on the left side; they need a right fullback much more.)

This is probably nonsense or at best one of the club’s, or player’s agents, trying to strengthen their negotiating position. But before we go off on one, I think we all agree we want quality players approaching their peak years. However the situation may be that Nacho has told the club he is not signing a contract and plans to leave; then Arsenal have a decision to make, either let him run down his contract or get a few million in January; is our current cover good/fit enough, emery won’t really find out due to injuries, so it’s pragmatic to… Read more »

Not until next Summer– or the TW that following January.
We are in stop-gap mode at present. The by-product of bidding AW adieu earlier– than the new backroom team was ready for.

Please, do you have to sign off with your name every time?

Only since comment boards have existed.
I bet you fold your undies too. 😉

The ‘signoff’ or the ‘undies’?
Trying to determine the level of ‘retentiveness’ I’ve waded into.

It’s about saving money. Despite a new manager the board still lacks ambition and will continue to do things on the cheap.
It’s something we will have to get used to and hope that Emery can what some magic within the restraints the owner will put on him.

Another Paul
Reply to  Voldermort

This guy is a seriously good player

We did spend a lot on strikers last season though

It is disappointing that we are even being linked to old players close to their retirement. We’re not an MLS team.

welp, this isn’t too overwhelming

This just doesn’t make any sense really. Both Monreal and Kolasinac are quality options, and even Maitland-Niles can play there as a backup. I understand why we got Lichtsteiner for right back cover, but there really doesn’t seem to be any point in getting a similar player at left back given the players we already have.

If true, I’d take this to mean that kolasinac isn’t rated by Unai. To be honest, kolasinac does well with the ball when he’s high up the pitch. When he’s in his natural position, he seems to be uncomfortable in building up play. Further up, he’s comfortable crossing/shooting in goal. Weird, but first touch and passing seem to be weaknesses.

I see it too, kola struggles to out manouvre opposition players to make passing angles. It results in him trying to pass too quick or very difficult passes and as a result gives him pretty low passing numbers.

It seems like he doesn’t have the natural dribble+agility to keep passing options open, but his final third play is direct and strong and pretty dangerous. I’d love to see him up his build up play cause he’d be a monster

I fear that this means Nacho won’t be renewing. Bilbao have been sniffing around for years. Like Koscielny and Cazorla he is an older player who might want to go home. But i hope not.

Even if he is going… Why would we replace him with a 33 year old. He’s not even an upgrade but if he was he would be pushing 35 by the end of his first full season with us.

Our squad is just full of stop gaps.

A Different George
Reply to  Ourchildrensworld

Bilbao, which limits itself to players with a Basque connection, probably pays attention to players like Monreal throughout their careers (I assume from his name that Monreal is not ethnically Basque, but he was born in San Sebastien).

I (want to) believe that the only reason we didn’t offer new contracts to Monreal, Cech and Welbeck are because of the wage control rules. They should all get new ones. Monreal is one of the best LB in the world and still has 2-3 seasons in him for the Premier League. At that time we can find a good replacement. There are also many reasons why Cech should get a new one. He is still superior keeper than Leno is, has great experience and is one of a few leaders in the club. Players love him. I think Cech… Read more »

good 3rd option…meh
can play on both wings….meh
nobody else want to play 3rd fiddle for that wage…meh
won the game vs leicester after his comeback in stoppage time….meh
he is english…oh fuck yes
lolz

Maybe I used my words poorly. He is our 3rd option CF but he and Mkhitaryan are our best wingers. Welbeck will play a lot this season if you like it or not. I never prefer a player based on nationality but you need to fullfill HG quota. I also think he is a big game player. He gives a team a balance.

Yeah i got u. But u dont need to be english to fulfill hg quota (cesc, clichy f.e.). I rate him too tho and i believe the late winner gainst leicester wasnt his last for us.

Welbeck gets canned by people for not being a great finisher and rightly so, but there’s a lot of advantages to having him in the squad. Being English or not in this particular case, only decides wages.

Cech, Lichsteiner, Koscielny, Monreal and Sokratis are all 30 and above.
Now we want to bring another 33 year old!
Am I missing something? Did Mislintat et al refer to The Dortmund Model or was it The Juventus Model?
I hope this is false.

Juventus or better than Dortmund though! Just saying

serious question: is the sun, when it comes to sports as much shit as when it comes to other topics? because i have to say the german “Bild” for example is pretty much the same as the “Sun” when it comes to topics like politics, celebrity gossip, genuienly bs but their sport ressort is not that bad. tbh i should know after some years of transfer window storys.

very good point which needs to be underlined. BILD is a terrible newspaper, but regarding sports they often break storys. they were the ones who knew tuchel was going to be named PSGs coach, while kicker claimed it was us

Great! We can sign him so he can sit on the bench, while defensive failings continue on the pitch. Yay!

We definitely need an upgrade on Nacho, yes he’s been a stalwart but regularly makes fairly basic defensive mistakes, is bad at cutting out crosses and is also prone to Xhaka-esque lapses in concentration. I’m prepared for the thumbs down because he does pop up with goals for us but I wish we had persevered with Gibbs a little longer.

Tell me one FB who is equally good at defending and attacking? He made two mistakes against Cardiff but he is also our most constant performer in the team. Most time you can rely on him at the both sides.

As much as I hated him, Ashley Cole in his prime.

A Different George
Reply to  NewSeason

As much as I hated him, Ashley Cole in his prime was probably the best player in the world at his position, the last English player about whom that could be said.

Where is the poo-meter when you need one?

jesus, whats with signing all these old gits, surely it cant be emery, and what do you mean, IF kolasinac is any good, WE know he is good, I sometimes wonder about this club since the old guard has gone

This is complete bollocks – if it happens i’ll piss in a toaster whilst it’s on.

If so,make sure you are the manufacturer’s recommended distance.

I’d rather toast in a pisser

I’ll just take this as gossip but surely we should be looking at long term replacements like Sessegnon, Chilwell & Tierney?

I don’t get this at all. Either renew Nacho’s contract or promote an academy product. Why let go off an amazing player because he’s old and then get someone who’s older?
Would have absolutely been on board with Luis 10 years ago. Quality player. Not now.

Kolasinac really needs to work on his fitness imo, he is brilliant going forward but lacks defensive awareness and usually doesn’t track back the way you like to see a defender. He gets that right, there’s no way he won’t be in the first XI. As it seems he has it all going forward and is at times a colossus to come up against in one on ones.

This guy is a seriously talented player only kept out of the Brazil team by the wonderful Marcelo and schooled in the Athletico school of mean defending. Anyone who has watched him play would know that, but it appears that too many here are willing to negatively comment without having watched him play. Disappointed in the comments tbh…

Poor attempt at a strategic play by the club in the Nacho negotiations?
Maybe an attempt by Luis’ camp to manipulate his scenario?

Only other option is the one I don’t want to think about.