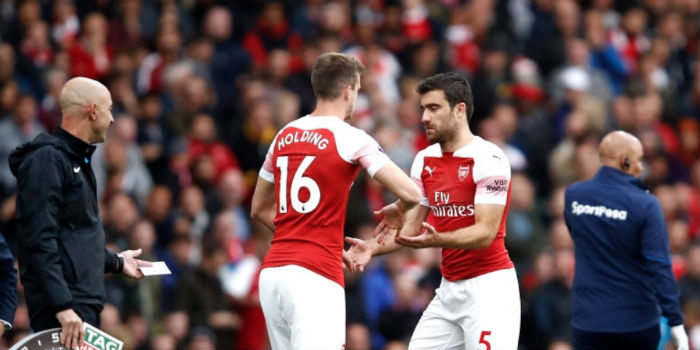 Arsenal’s medical team have confirmed that Sokratis is available for selection this week after recovering from a dead leg sustained in the win over Everton.

The Greece international had suffered the injury, which ruled him out of the Carabao Cup game with Brentford, in a collision with Theo Walcott.

Emile Smith Rowe, who made his first start on Wednesday, is a doubt for the weekend. The chances are he probably wouldn’t have featured anyway, but he’s suffered a knock to his hip.

Play him with Rob Holding!

What are you doing here Theo? Seeing if Sokratis okay?

Always has been a painfully nice chap.

Good news. Is it just me or do our injured players return earlier than they used to?

Play Mesut there.make that leech actually WORK for the bucks he is blackmailing off us currently.

Great news! #project24 is firmly on course.
3 points and a clean sheet, in that order, is all I ask for please.

Great news, we need him against a team above us in the league.

Start Socrates, Holding and Lichtsteiner (and Captain Nacho, of course). We need the mentality for Hamburglar Deeney.

His name is written in the headline of the article and you still call him Socrates?

I am so glad we finally found Dinos!

Good news. Sokratis and Mustafi are developing a good partnership. I like the fact that Sokratis is not afraid to take people to task. That said, Monreal has also had some faults. In general, if you want to find fault, you will find fault bc most defenders will slip up. The problem is people are sheep and simply led. They have decided now Mustafi is the problem and focus on that one mistake he makes in a game. Conversely they will elect to forget that Torreira also gives the ball away or Guendouzi gives up a free kick needlessly at… Read more »

As decent as Holding was midweek, nothing he has done would deem to suggest he replaces Mustafi just as nothing Leno has done would recommend replacing Cech presently.

Personally I would like to see Iwobi involved at some stage.

Ramsey can come on for Ozil, Guendouzi for either Granit or Torreira.

The back line needs to keep its relationship. Emery looks like he has plenty of faith in Mustafi who does a lot of important blocks and tackles but largely they are ignored by people who are looking only for fault.