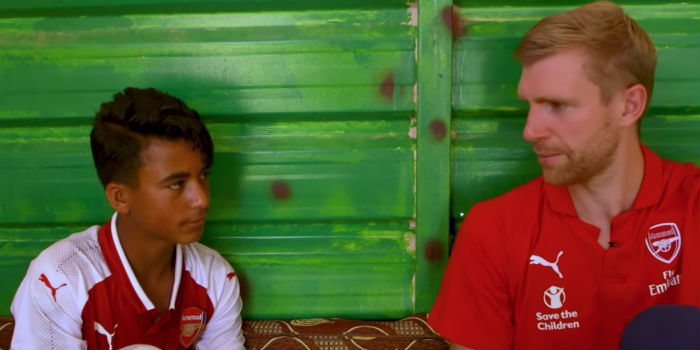 This Saturday, an assortment of Arsenal Legends will face their Real Madrid counterparts at the Emirates in a match that will raise money for projects in the UK and abroad managed by The Arsenal Foundation and Save The Children.

To date, as many as 35,000 children around the world have directly benefitted from the partnership. It’s now looking to go to the next level.

Over the next three years, a bespoke coaching programme, aimed at improving the physical, mental and emotional wellbeing of girls and boys aged 12 to 18 years old, will address the urgent needs of vulnerable kids in Indonesia and Syrian refugees stranded in Jordan.

Per Mertesacker, our former captain and now head of the Academy, went to see the work that’s been done in Jordan so far, meeting some of the young people whose lives have been torn apart by conflict.

If you’re at a loose end tomorrow, there are still tickets to watch Arsenal against Real Madrid.

The club is aiming to donate at least £600,000 to The Arsenal Foundation as a result of ticket sales and other income generated from the two matches against the Spanish giants.

And buy some tickets – will be great to see us beat Real Madrid.

This is pure class from Arsenal, this is why I support this club!

Where does he stand amongst our greatest centrebacks ever? Came in during a period of self inflicted turmoil within the club. Helped stabilize the side during his first season two seasons. Went a year unbeaten alongside Koscielny. Won 3 FA Cups, conceding a penalty and then equalizing in one semi final. He also won 3 community shields with us. That’s in a league that probably asked more questions about his ability to read the game due to the intensity of the premier league. Mentored Hector and led the team really well. Was behind Kompany and that racist guy at Chelsea,… Read more »

Hard to put him right up there, partly due to the lack of success in the PL and CL.

Would always choose, Adams, Keown, Campbell, Bould and others in front of him.

Fair enough but, considering these guys club status being first behind them lot is not bad still. Him and Arteta really steadied a ship adrift on and off the field and his arrival coincided with a run of trophys too. For that, its not hard to put him right up there for me personally. And this video was a joy to watch man very eye opening and humbling. What a beautiful club, beautiful people! Hopefully in few years we can have a story of teen making debut for first team with background story that leads with ‘From refugee to Arsenal… Read more »

That would be quite something, wouldn’t it? Lovely idea.

This is why I love my club

We should start calling him BFFG…Big Fuckin’ Fantastic German