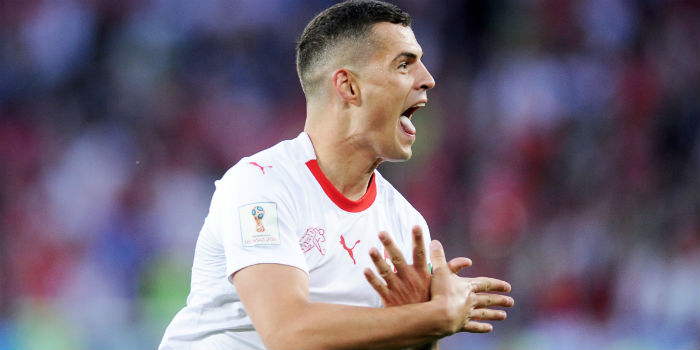 Granit Xhaka has apologised for imitating the double-headed eagle of Albania’s flag in the aftermath of his goal in Switzerland 2-1 victory over Serbia at the World Cup and promised not to repeat the celebration.

The midfielder, who is of Albanian descent, was fined, along with teammates Xherdan Shaqiri and Stephan Lichtsteiner, for making the gesture in Russia by FIFA who deemed it politically inflammatory in light of tensions between ethnic Albanians and nationalist Serbs in Kosovo.

It’s expected that Xhaka, 25, will inherit the Swiss captaincy from veteran Lichtsteiner when he retires from international football and it looks as though the apology has been timed to quell questions about his suitability for the role.

Former Swiss goalkeeper Stephane Henchoz, sounding like someone who has far too much time on his hands since retiring from being a fucking cheat, had been generating headlines for some pretty lowbrow comments on the subject of ‘dual-heritage’ players.

“I’m sorry for what happened and I would be stupid if I said I’d do it again,” Xhaka told a press conference ahead of his country’s UEFA Nations Cup match with Iceland. “It will never happen again.

“I have only one passport, the Swiss one, and I wear the red-coloured jersey of Switzerland proudly.

“I will be eternally grateful to [coach, Vladimir] Petkovic for supporting me before the match against Serbia.

“You cannot imagine how I felt before the enormity of insults and hatred of which I had become the object of.”

Xhaka’s fulsome apology came in stark contrast to that of Shaqiri, who in addition to making the same gesture when he scored the winner also sported boots featuring an embroidered Albanian flag.

The attacker, who moved from Stoke to Liverpool this summer, said: “Sure, I apologise if people felt attacked in Switzerland.

“Somewhere, I don’t know, maybe in the mountains, where someone watched the game and it bothered him, I would certainly apologise.”

One suspects Henchoz might have a pad in the mountains.

People are too sensitive. But good that he has apologised.

Much like the earth’s resources, one day, probably too late, the tin-drum beaters will realise that it’s simply not sustainable to make every minority the majority.

I’m agreeing with Pedant’s comment (and Shaqiri’s) and, in my own roundabout way, disagreeing with Henchoz’s. 😉

What the absolute fuck was that?

Interesting that you say this & yet every one & their dog has been backing Ozil for something a lot less than this.

There is absolutely no evidence that there was ever anything racist said towards him yet everyone is jumping on Kroos for husband side of the story.

There does not have to be conclusive proof of objectively racist comments for someone to be a target of racism. Surely you’re aware of the dog whistle tactics some/most media outlets use to get the idiots frothing, whether the morons realise what’s up or not – at the same time maintaining plausible deniability. Why do you think Ozil was the scapegoat despite probably being one of Germany’s least worst players? Why was Sterling singled out for England, coming off an excellent season and before he even kicked a ball? They were always going to be scapegoated. And why would you… Read more »

Didn’t mustafi do the same on Sunday after his header?

Brendan from NY
Reply to  Bubs

my thoughts exactly… maybe his PR team or agent thinks they need to get ahead of the issue before FIFA steps in. Also its a message to his teammates that Xhaka regrets it and probably hopes they dont use it again

Well …. Noone cares about what Mustafi does.. Playing “Air guitar” , throwing up the WU-tang sign , so many antics it would be a full-time job to keep track of it.

I thought Henchoz was a defender for the mugsmashers. I only know this because him and Hyypia were the bloody bane of Arsenal for that stretch where we couldn’t find a way to beat them in the early noughties.

Henchoz is a racist.

Another exaggerated story in my opinion. I don’t know why Swiss people should be offended by that. He has Albanian roots and they have history with the Serbs. It is rivalry. It is madness that he should forget his roots. I am a strong supporter of assimilation but that doesn’t mean I demand that someone forgets from where he is. That is football, emotions are big.

weird timing, given that Mustafi did the double eagle celebration to celebrate his goal and Xhaka’s assist over the weekend. I actually thought they both might get fined… or maybe this apology is a preventative measure to settle or avoid FIFA discipline

Cheesus
Reply to  Brendan from NY

The apology was issued during the Swiss national team’s press conference in order to settle the controversy the gesture has caused in Switzerland. So the apology was forced by the Swiss FA and the players have already been fined by Fifa.

Don’t really have an opinion on the gesture (guess politics has no place in football, but it is understandable to react given the abuse they got), but love Shaqiri’s “apology” haha. Guess he was forced by the swiss FA as well, but honestly i think Swiss people being offended by this is a bit ridiculous, so his “apology” seems quite appropriate hahaha.

Anelka did this all the time with no repercussion ??‍♂️

Actually this was a big controversy over the summer but in my opinion he should not have apologized! In Switzerland we are far too politically correct… let’s the Xhak be a controversial captain.
… and let him do whatever he wants with his hands as long a it lashes some fucking rockets in the back of the net (same for Mustafi).

“It will never happen again.

…But I didn’t say that Mustafi wouldn’t do it!”

It is a stupid thing to do and has no place in football. Arsenal should tell players not to celebrate this way. I can also totally understand the Swiss that were offended.

It is a nationalist symbol that is provocative to other Balkan states and shows a lack of political sensitivity – to say the least – on behalf of the players. Moreover, all political messages or symbols in stadiums are banned by FIFA.

Honest question: why is it provocative to other Balkan states? By that, I mean, does it have some kind of right-wing connotation, rather than just being patriotic?

I get how it could be viewed as provocative in the context of the way the players did it in the match against Serbia, but in a general context (e.g. Mustafi doing it) is that the case as well?

It symbolizes Great Albania, a notion which incorporates claims to regions in a host of neighbouring states. To put it simply though, the world is a toilet, so the last thing we need is people bringing politics into football.

The world can’t be a toilet, it’s not inside spurs stadium.

Fair enough you seem to understand the issue better than me, I read some stuff when it happened at WC and didn’t really feel the pulse of it or find anything to warrant the outrage. It felt more like “Banter” level at the time as they are of Kosovo Albanian heritage and faced Serbs (who by most accounts were the ones responsible for various war crimes towards kosovans there are no good sides in war though so probably goes both ways and genocide) . But like I said I dont understand all the complexities and overt Nationalism always causes problems.… Read more »

I don’t get it, how is it a double eagle gesture? I thought eagles have 2 wings? I’m no bird expert but this one is confusing the f*** out of me ?

Yeah you are correct , thats not how you do the eagle.

It is a double headed eagle, but I think the cross symbol may represent legs and wings, or maybe two heads and 2 wings.

Is that all his mistakes?

I might have overreacted then ,could have sworn twas worse.

He has real Albanian DNA. Nothing wrong man.

Guys, I know that you don’t view this as a terrible gesture but here are some words from the guy that is actually from that region in Europe. You can take it as you wish, this is just facts that are relevant to people here (and yes, there are many Arsenal supporters here, huge fans). Xhaka did this to provoke Serbian fans and players, and whole of Serbia for that matter. It has roots in a conflict that has been going for decades and was bloody and horrible for both sides. Regardless who is right or wrong in this matter,… Read more »