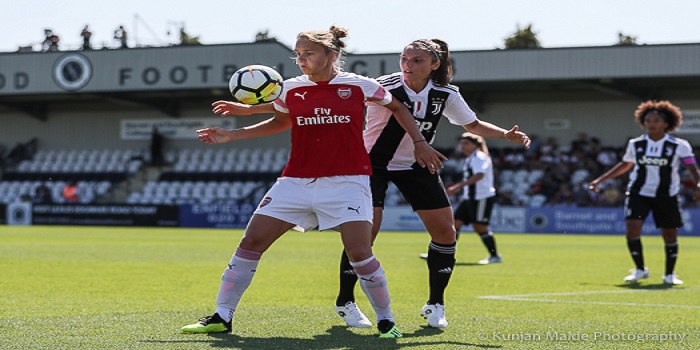 Arsenal Women continued their perfect start to the WSL season with a 6-0 thrashing of last season’s 4th placed finishers Reading at Meadow Park this afternoon. Vivianne Miedema scored her third hat trick of the season in the rout and Viv spoke to Tim Stillman immediately after the game exclusively for Arseblog News.

On changing formation again against Reading…..
It just shows that we’re really flexible, already this season we have played in a 433, or 451, a 4141 and today we went with three at the back. It just shows we have quality everywhere and for today against Reading Joe had a game plan on how we should play and you can see it went well again.

On scoring twice in the first seven minutes….
We spoke before the game and said that last weekend’s win against Chelsea doesn’t count anymore if we don’t win today, so we said we really need to be sharp from the very beginning of the game. We started well and obviously that gives you confidence and it just shows you the form all of the girls are in at the moment.

On striking a balance between confidence and humility….
We’re in a flow at the moment and we hope to keep going like this, of course. But we know we have two hard games coming up again against Bristol and Birmingham, we know all the games are difficult but if we play like this, we can beat anyone. We need to keep this confidence, but what is good for us at the moment is that we show respect for the opponent and we keep going for the whole game, you can see that on the pitch.

On topping the WSL goal scoring charts with 9 goals….
I really struggled with injury last season, but I’m really happy on the pitch right now and I feel like I can be important for the team, to create goals and score goals myself. It’s good for me, I have a lot of confidence right now and you can see that on the pitch. I can still do better and I hope the team and I will keep getting better every single week.

Vivianne Miedema has 9 goals from 21 shots in the WSL this season. 86% of her shots have been on target in her 450 minutes on the pitch. (via @BBCSport).

On Joe Montemurro signing a new contract this week….
We are all delighted, I am really happy because I really like Joe as a person, but he is a great coach and you can see it in the games. Everyone has respect for him, everyone knows their job and we play really good football and that’s what I love about being at Arsenal.

Is there any way of adjusting the alerts for this app to ignore the girls football please?

No, and there never will be.

I know I maybe starting a fight here but how do posts about Women’s Football inhibit your enjoyment of the rest of Arseblog? Are they not very easy not to look at?

Thanks, Tim. I love how together the squad is. Such a happy camp at Arsenal Women. And what a joy to have a deadeye striker like Miedema. I’m sure it gives her teammates so much extra confidence. Another top performance, particularly pleasing to see Beth Mead scoring because she is such a tireless, unselfish player. Jordan was brilliant, we didn’t miss Kim Little in that sense, but I do wonder, if she had been on the pitch, whether the team would have had that 20-minute drop in intensity in the first half? Only fair to mention what a good performance… Read more »

Where can you get highlights of Women’s matches?

BBC do a show on Sundays straight after MOTD2. Sure it’ll turn up on their player in a few days as well.

We are fire this year. Hope we can win it

i’ve always followed the women’s team and was a bit annoyed that the bbc seemed to switch on to the wsl prior to this season with several headline articles how great Chelsea and Man City were and very little mention of how seriously we’ve taken it since long before these fly- by-nights barged their way to the front of the curve. Am i being typically bunker mentality Arsenal in saying now the season has started and we are clearly the best and thrashing everyone Women’s football articles have been reduced to below “freak goals in the Irish league” status again… Read more »

It’s ridiculous, I swear I’ve seen more coverage of Utd’s ‘Jonny come lately’ lower division side than our decimation of teams this season in mainstream sports media, or Chelsea & City’s ‘slow start’ and how they will come good. God, even the weekend round up in the Guardian was talking about City’s Caroline Weir being player of the season already. If it were the men’s side I would be happy to fly under the radar, however the women’s game needs all the promotion it can get – what better way to get people exited than an awesome attacking team, packed… Read more »

Utterly ridiculous the love heaped on Utd. Any team with international talent playing in the second division would be destroying their competition. Hell they’d be midtable in WSL at this point. But they managed to sign the first choice England left back and second choice keeper no problem so it shouldn’t wow anyone that they are decent.
Miedema won’t get the hype because she’s not home nations. That’s the truth. She’s 22 and has 50 international goals and over 120 league goals. She’s immense. But you’ll not hear it.

Another really impressive win. There was a slightly sticky period at 2-0 up when we seemed to take our foot off the gas (or should that be “played a little bit with the handbrake on”?) and Reading came back into the game a bit, but then the girls pushed on and really blew Reading away. Exciting times!

Indeed, I wondered if the “fluid formation” thing had confused them a bit too much once the initial rush died down, but we’ve so many goalscorers now.

That is a lovely goal, love the back flick to set up the cross. 36 goals in 6 games! Complete insanity from the Arsenal.

possibly a bit early to say, but really looking like they could be getting back to the kind of dominance they used to have, what a series of results they’ve had

Is there any way to convince Arsenal.com to have the fantastic women’s team’s highlights and goals on the site?