THE LOWDOWN
Arsenal Women aim to continue their 100% start to the season as they entertain Reading Women on Sunday afternoon at Meadow Park. The Gunners made an enormous statement in the title race by thrashing defending champions Chelsea 5-0 away from home last weekend.

Last season’s 4th place finishers Reading will provide a stern examination at Meadow Park, with players like Fara Williams, Natasha Harding and Remi Allen, they have plenty on the counter attack. That said, the Gunners will still be favourites to win as they aim to stay on top of the league.

Arsenal have been boosted by the fact that coach Joe Montemurro signed a new contract this week, a deserved recognition of the work he has done since arriving from Australia 11 months ago. “I’m just really keen to do some fantastic work, some innovative work, and take it to the next step. To be given the opportunity to do that and the time to do that now is really exciting,” he told Arsenal.com.

TEAM NEWS
Arsenal are riding the crest of the wave at the moment, but the feelgood factor has been checked a little by the news that Kim Little will miss the next ten weeks with a fractured fibula after a heavy challenge from Chelsea’s Drew Spence. The fact that Spence was only booked has created debate once more around refereeing standards in the WSL.

It was shown on the BBC's Women's Football Show, not pretty. pic.twitter.com/9Kzou1aMon

The loss of Little is a huge blow, she has scored AND assisted in each of her last 7 games for club and country, having fully recovered from a cruciate ligament injury picked up last spring, she was showing her best form once again and has been the pick of an excellent bunch at Arsenal so far this season.

Real shame for Kim, Arsenal and the league. Fans come to watch players like her play.
But REPEATEDLY let down by the standard of officiating (Not all officiating, may I add). But there’s a real underlaying problem somewhere.
My yearly rant ✔️

Meanwhile, Lia Walti was not in any of the training pictures this week, so there has to be some doubt over her participation. Tabea Kemme has just begun to train with the ball and is on schedule to return in another 4-6 weeks, Viki Schnaderbeck and Dan Carter are still out. Pauline Peyraud-Magnin is likely to continue in goal.

LAST TIME OUT
The Gunners ran out 3-1 winners over the Royals back in April, first half goals from Kim Little and Dominique Bloodworth (then Janssen) gave Arsenal a 2-0 cushion, before Fara Williams pulled one back. Danielle van de Donk’s goal sealed the points on 64 minutes.

Three goals for Arsenal Women, who are looking pretty good at the moment ?

Posted by The FA Women's Super League on Thursday, 19 April 2018

PLAYER TO WATCH
With Little out until the New Year, greater onus will fall on Jordan Nobbs in midfield. At Chelsea, Nobbs started as more of a second striker, with Montemurro utilising her high energy levels to press the Chelsea centre halves. Against Reading, she is likely to revert to the number 8 role.

Without Little’s playmaking abilities, Nobbs will carry a lot of the creative burden and some of the goalscoring burden left by Little’s departure. But Jordan is more than capable in both respects, as her two goals against Chelsea last weekend proved. Though Jordan admitted to me last week that her WSL Goal of the Week effort against Chelsea was an accident.

Your goal of the week winner… with over 50% of the votes is… ?@JordanNobbs8 @ArsenalWFC pic.twitter.com/qRJzQYY9PQ 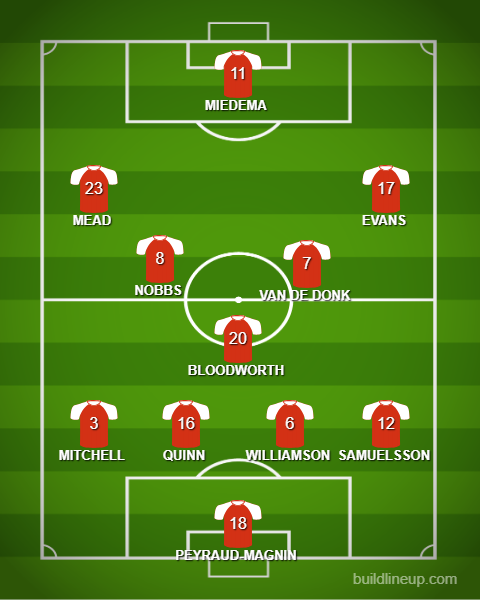 HOW TO CATCH THE GAME
The match kicks off at 2pm at Meadow Park and will be streamed live on the BBC website and will also be shown on the red button. If you want to go to watch at Meadow Park, you can buy tickets on the turnstiles at a rate of £10 adults and £5 concessions.

COMING UP
We will have player reaction from immediately after the game on site on Sunday evening. Next week we will also have an exclusive feature interview with manager Joe Montemurro. I know I said it would be Vivianne Miedema, but with Joe’s new contract I decided to change tack! Besides which, there is an excellent interview with Viv on Arsenal.com here.

Really looking forward to this. Jordan will do great. Assuming van de Donk is fit, she will surely contribute creatively.

Thanks for the article, very informative!