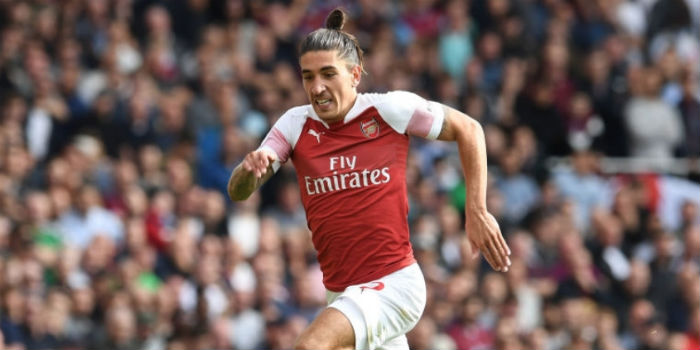 Hector Bellerin says playing out from the back does involve more risk but he insists that Arsenal will get better as they grow more familiar with Unai Emery’s favoured tactic.

Despite a nine-game winning streak, the Gunners have ridden their luck at times this season with opponents not always punishing them for lapses in concentration and poor passing out of defence.

The likes of Watford, Everton, Brentford and West Ham, to name but a few, all had chances to make life difficult at crucial periods of recent encounters, leading Emery to say his players can and will get better. It’s a sentiment that his young compatriot shares.

“We need to be realistic, Rome wasn’t built in a day,” Bellerin told Arsenal.com.

“There’s loads of things that are changing for us, not just as a team but as a football club so the most important thing is to believe in the way that we want to play.

“We’re a team now that play from the back, we probably risk it a bit more than before, but for us it is important for our fans and for everyone around us to believe in this idea that we have.

“At the beginning it is going to be harder, but the more we train it, the more we work at it, the better we are going to get at it.

“For us it is about getting used to the system, be a team, be competitive and have this winning mentality, take it to the next level and become the team that the manager has in mind.

“I’m sure with the help of the fans and everyone at the club we will be able to do it.”

Arsenal will spend the weekend watching their rivals in action before they resume their busy pre-Christmas schedule against Leicester on Monday. Emery is keen for his players to hit the ground running after the second Interlull of the season.

“We need to continue working calmly in our bodies and our mentality,” he told his pre-game press conference.

“Our target now is the same as in the first matches. The first two matches we lost, against Manchester City and Chelsea.

“But after six matches winning in the Premier League, it hasn’t changed. [We need] this calm because we [beat] a lot of opposition teams with very [poor] performances.

Arteta: Bellerin had doubts but he’s being rewarded

Vardy will certainly be eager to take advantage of any slip ups at the back on monday, so I hope the lads are switched on.

Vardy can piss off!

If he gets one, that’ll just make it 5-1. With Wes Morgan banned, and their defence all over the place even with him in the side, I expect our strikers to help themselves with a few.
COYG!

Some might argue that Morgan being out is a boon for LCFC- the real issue I’m concerned with is that lumbering fool Maquire breaking someone’s leg.

Its knowing when to take the risk and when to mitigate it that we have been struggling with, particularly playing back to the keeper. Which was where Sokratis I felt was useful in providing some intrinsic experience, offering advise to his fellow teammates when to just get rid of the ball. Its tricky because when you say just hoof it, had the defender made the correct intercept or pass instead, it comes off very nicely for us working out of the back. Point in case was Mustafi who was criticised for giving away the free kick on Deeney not too… Read more »

Dude we get it! You love Mustafi…

Nonono, you dont get it.. He doesnt love Mustafi. He is being fair.

If the world ends before we play Leicester? Then we’ll never drop points again

Hopefully part 7 to project 24 can happen or even better part 7 of project 108 ?

No mention of his favorite word “process”…

Are you sure Emery said this?

A Different George
Reply to  kinghenrythe14th

His favourite words are “good morning.” Sometimes he varies that with “good afternoon.” As far as I can tell, he always gets it right.

Rome wasn’t built in a day? Now he’s interested in architecture as well as fashion? For goodness sake! Just think about football all the time.
Just a free warning. This was tongue in cheek.

Dan b
Reply to  Carl

Oh no somebody made a joke. Better thumbs down.

What was that Mertesacker phrase? The collective? The team is playing better week by week so the collective is getting stronger and more defined each week.
Bellerin is correct, it doesn’t happen overnight.
Heck the manager hasn’t settled on his best 11. Which as weird as it seems imo doesn’t include Ramsey and I have enjoyed his playi since he joined arsenal.
If Iwobi starts Monday I won’t be surprised.

the playing style is also dictated by the personnel. How many world-class players do you have in the positions in the team. If the entire team is at a high technical level, then you can play a highly technical game. After a few seasons of prosperity, now there are 20M + players in most positions and even some on the bench.

This also lets young talent to develop in the company of strong players all around them. You can afford to play an Iwobi or Guendozi or Holding and have enough cover for them if they make a mistake.