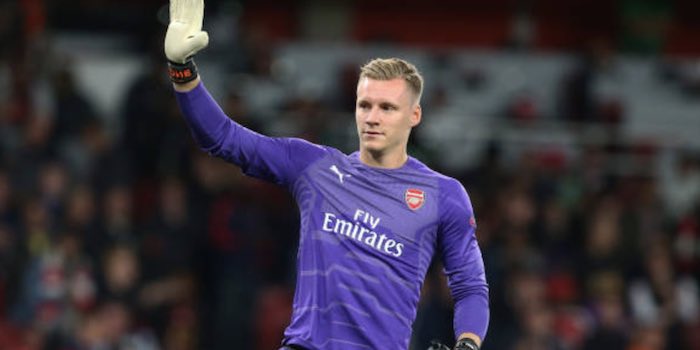 An injury to Kevin Trapp has seen Bernd Leno called up to the Germany squad for their upcoming games against the Netherlands and France.

The Eintracht Frankfurt keeper was selected ahead of the Arsenal man, but his withdrawal means the 26 year old could add to his six full caps, the last of which came in a 5-1 win over Azerbaijan in August 2017.

Leno has had to bide his time domestically since his £22.5m move from Bayer Leverkusen in July. New boss Unai Emery preferred the experience of Petr Cech in the Premier League, but when the veteran sustained a hamstring strain in the 2-0 win over Watford the door was opened and the German has done his best to stake his claim to the number one position.

He kept clean sheets against Watford and Qarabag, pulling off some important saves in each game, and although we conceded against Fulham at the weekend he was blameless for the goal and Gunners had him to think for making a fantastic stop in the opening minutes to prevent the home side taking the lead.

Hopefully the call up to the national side will be another boost to his confidence. Former Arsenal man Serge Gnabry, now with Bayern Munich, was also a late addition to Joachim Low’s squad.

Really impressed with him so far.

Good. He looks a decent keeper. I would keep him in even when Cech gets fit.

I think if you looked up stereotypical German man on Wikipedia Leno’s picture would appear. Good luck to him he has looked really good so far

Behind Ribery and Robben in the pecking order on the wings and sometimes even James gets to play on the wing before he is introduced. Gets his minutes though and gives a good account of himself when he comes on.
He will have to bide his time and stay inury free, then I’m sure he will be a success at Bayern.
Hope to see some more of him in the next two international games. Should get his chance since Reus is injured…

Isnt Reus almost always injured?
What a player he could have been if he didnt have all those injuries..

Still an amazing player. His loyalty also speaks volumes. Leading the league too.

That and the fact his idol and the man he copied play by play even down to the wristbands he wears is none other then Mr. Rosicky

Surely Leno is better than Trapp? Have a feeling he will get selected more often as No. 3 to Neuer and Ter-Stegen if he plays regularly for Arsenal

Wow, Germany have a lot of good keepers. Brazil might be the best right now with Allison and the ugly one on Citeh.

Both are ugly, Leno is beautiful.

hold on….wasn’t he supposed to be terrible cos he didn’t take Cech’s place at the very start of his first season in England ?

It seems like the more he plays the bigger the problem Emery has when Cech is fit again. And also Lacazette is on fire but Auba scored with two great finishes as well and Ozil will be back and omg my mind can’t take these decisions.

I love Petr cech, I am so in love with bernd Leno, oh, I just love my arsenal. Emery, over to you.

Do us proud boyy

All his Christmas’s seem to have come at once! Good Luck Leno do yourself proud!

He has a very good chance with some of the high profile calamitous in between the sticks for Germany recently.

Looks solid thus far, a better combination of reaction stops and command of the box where both Ospina and Cech are better at one or the other.