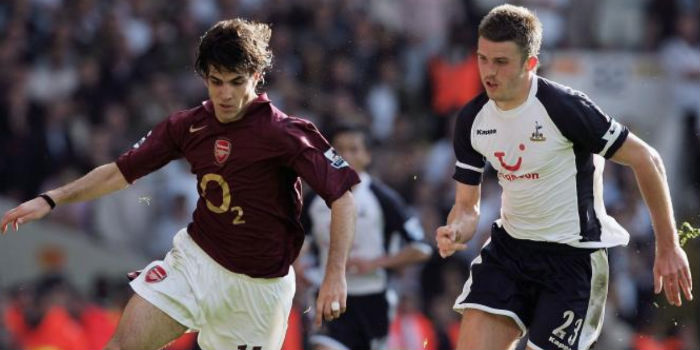 Michael Carrick has revealed that Arsene Wenger wanted to sign him for Arsenal ahead of the 2004/05 season until a standout performance by 17-year-old Cesc Fabregas in the Community Shield changed his mind.

In his autobiography Carrick, who was 23 at the time and playing for West Ham in the First Division, reveals that he was overwhelmed when David Dein informed his agent of the interest and immediately took up an invitation to meet Wenger at his home despite Harry Redknapp wanting him at Portsmouth.

An extract published in The Times (£) reveals the Frenchman quizzed the midfielder on his strengths and weaknesses for an hour and promised he’d get back to him once Arsenal had played Manchester United in Cardiff.

Arsene Wenger’s side, with a mulleted Fabregas pulling the strings in midfield (“He’s only seventeen, He’s better than Roy Keane “) went on to win the game 3-1 courtesy of strikes from Gilberto and Jose Antonio Reyes and an own goal by Mikael Silvestre.

Persuaded that the teenage Spaniard might have the quality to be a long-term replacement for Patrick Vieira – the Frenchman would leave Highbury for Juventus 11 months later – Wenger opted against a move for Carrick. Understandably, he was devastated. All the more so, given he then had to join Sp*rs.

“I waited, and waited, and that call never came. The next day, I had to go into training at West Ham instead and, on the way, David phoned to say he’d had a call from Dein. David relayed the gist of his message, like, “I’m sorry, the manager says we don’t need Michael. Fàbregas is coming through like he is. Sorry, the deal’s off.” Fàbregas’s performance changed Wenger’s mind about needing me. I was totally devastated as I had my heart set on Arsenal and playing with all that talent. My head was gone. Arsenal had swayed me and I didn’t have a clue what I’d do now.”

In fairness, life didn’t work out too badly for Carrick. He went on to win a shedload of trophies at Manchester United, who he joined after two years at White Hart Lane.

In June last year, Wenger paid tribute to Carrick on the occasion of his Manchester United testimonial, lamenting his decision.

“I give Michael my deepest congratulations for his testimonial,” Wenger told Arsenal.com. “I think he deserves it hugely.

“I would say personally I’m an admirer of his career, of his quality.

“One of my regrets is never having had him as a player because I think he was one of the greatest players in English football.”

Not joining Arsenal and having to join Sp*rs. Cruelty beyond belief.

And we could have done with him alongside Cesc.

we could have destroyed his career.. ahem

food for thought
Reply to  SG_Goonner

he was precisely the type of intelligent player who would thrive under the Arsene system, like Tomas, Dennis, Thierry, Freddie, Robert, Patrick.. my fingers are getting tired, but you get the point.

Cesc and Carrick wouldn’t have been bad. Oh well.

Surely you don’t think they’d have been a better pairing than Cesc and Denilson. Or Cesc. Or Cesc and Alex Song. Or Cesc and Flamini.

Well at least Sol Campbell fulfilled his dream of winning the league at white hart lane.

He went and had an awesome career at Manchester United. All’s Well That Ends Well

We really could have used him that season, as memory serves me Gilberto spent most of it injured and there was a lot of contract stuff with Edu going on too. I remember the Chelsea game at home and we started with Flamini and Cesc. Not 40 years between them.

And that was one of the best midfield combination we had. 2 players who covered each other perfectly.

Hindsight is 20:20, and Wenger was already starting to lose the plot then. He stayed 10 years too long. But anyway, onwards and upwards. COYG.

A Different George
Reply to  Cagooner

Yeah, crazy old man saw this teenager and thought he might be a great football player. (As well as a champion pizza hurler.)

This is one of the instances where a manager is presented with a call to make seemingly out of nowhere. Wenger obviously knew of Cesc’s talent but maybe hadn’t anticipated him rising to the occasion as well as he did. Suddenly he has to decide whether to stick with the promising youngster, or to get a deal over the line for a transfer target. The following quote from Wenger has been somewhat notoriously remembered, but I think captures the man’s principals quite well: “I have been criticised for not hiring Xabi Alonso or Gareth Barry. But if I signed them,… Read more »

well, Xabi Alonso was one of the best midfielders of his generation. Song, Diaby, and Denilson certainly were not. Wenger is a legend and I hate all the negativity he still gets from some of our fans (look at what he did ffs) but his loyalty to some players was his biggest weakness. But I see where he is coming from regarding Gareth Barry.

Imagine killing Denilson for Bareth Garry. Would have been a shot too far.

Agreed, it was his weakness. Still think he got this call right though.

Not signing Xabi Alonso, or not signing Michael Carrick?

Methinks Arsene was more interested in making sure his project and protégé succeed than Arsenal FC succeed.

Towards the latter half of his tenure, he had been trying to use us as his base for his school of philosophical thinking, educating youths, at our club’s expense.

This is a myopic view and frankly a little saddening to see. Wenger had his flaws for sure, and the last two, three years at the club were probably too many. But latter half? You suggest that 11 of his years here are wasted? He transformed this club and established us as elite with our new stadium (look at the trouble Spurs and Chelsea are having with this now!) It might have been a while since we won the league, but don’t whitewash the other trophies we’ve won since then. I fucking love our FA cup record. And because of… Read more »

And staying in the Champion’s League turns out not to be as simple as we thought. Ask Chelsea.

db10s
Reply to  A Different George

Or qualifying from the group phase. Ask Spurs.

Totally agree with what was said above. Except I think my personal turning point was losing to Monaco in the knockouts?

agreed. though i remember feeling like killing cesc when he left for farca.

“All the more so, given he then had to join Sp*rs.” Hahaha.

This stuff happens all the time (Ronaldo.. *sigh*) and there will always be multiple “ones that got away”… but hard not to imagine having a top English player in the centre of our midfield to build around. *double sigh*

cesc going to chelski and winning 2 titles makes me sick to the core.

I never rated him highly, always thought he was a cheap knock off. He couldn’t even get into the England team, that says a lot.

That’s probably more to do with the useless England managers than Carrick. I’m with Wenger when he says he was one of the best. Probably to understated for the old heads who just wanted guys who could ‘run araand a bit’

A Different George
Reply to  PeteyB

Yeah, Gerrard and Lampard were a huge success, weren’t they.

Ex Scum and ex Manc but a very, very classy player l, it has to be said. I remember being really pissed off that we didn’t sign him AND have Cesc at the same time. And it wasn’t even about expense either I think his price was really low due to contract running down. But wenger had this thing of ‘not killing’ one player with competition from another of a similar skill set. Very frustrating, but then I remember being upset that he overlooked Emile Heskey and signed some French winger from Monaco instead so what the fuck do I… Read more »

A Different George
Reply to  MeSoHornsey

What happened to the Monaco guy?

The only likable player from Man Utd

I love the garden gnome, personally.

Another player who we missed out on. Didn’t we hesitate on activating a first option on him until it expired and Chelsea outbid us?

Did Mata fall into the “we can’t afford his wages” category? Seems we have missed out on alot of players for that reason.

And Yaya Toure and Zlatan. Feels like every so often they’ll talk about how close to signing with Arsenal they were but never sealed the deal

Oh Cesc. God I wish he had stayed with us. Seeing him rot on the bench at Chelsea just makes me sad. Yes I was angry at him for years beyond belief. But nothing will take away those wonderful years we had. Should still be captaining this side. If only it weren’t for that fucking barcelona dna virus.

I don’t begrudge Cesc going to barca at all. Local boy called to play in what was the best barca team ever and arguably the best team in the world at the time.

A team managed by Guardiola, himself a local legend and who shot to fame in the number 4 shirt that Fabregas was to inherit.

It all clicked into place.

It didn’t work out but you can’t begrudge him having a shot.

Sometimes you can love to clubs.

It was Cesc in the gleaming yellow O2 jersey sporting the hairband which made me fall in love with Arsenal.. he was the man at Arsenal, wasn’t he.

Couldn’t we have had both?!

I can’t lie, I actually shared tears when Cesc left us, he was so so loved by Gooners when he was with us, our golden boy then. I still can’t dislike him even though he now plays for Chelsea. Now we are just finding out he was the reason we didn’t sign Carrick. Cesc why?!

Imagine we had a decade of Carrick instead of Denilsons, Flaminis and Songs ?

I’d have preferred Carrick. Cesc ultimately did nothing for us

We nurtured a very strong & dynamic combo in cesc and flamini, the latters career is nowhere near what carrick achieved, but had he stayed with us….. I am sure this question will haunt him 4ever.

Maybe with carrick along we wouldnt have had to withstand the unexplainable Denilson experiment.

Typical, don’t want to sign some player to protect some of our players, meanwhile other teams will sign him anyway and compete witht their current player and see which one better or suit with the game plan. I hope we will never do that again. Lol