THE LOWDOWN
Arsenal face the first big examination of their title credentials with an away match at last season’s Double winners and runaway champions Chelsea. Arsenal have enjoyed a superior start to the defending champions, who started the season with consecutive 0-0 draws with Manchester City, Bristol City and Everton, while Arsenal built up a lead and a significant goal difference at the top.

However, Chelsea have regained their mojo, beating Brighton 2-0 just before the international break, preceded by a 6-0 confidence booster against Bosnia’s SFK in the Champions League. They are also yet to concede a goal this season. The Gunners have not played for 3 weeks as they sat out the last round of WSL fixtures (there are 11 teams in the division, meaning one sits out every round) and with the international break.

With @ChelseaFCW v @ArsenalWFC this weekend we look back to the first ever #FAWSL goal, which was in this fixture back in April 2011 ??

But can you remember who scored it? ? pic.twitter.com/0fsvGkadv4

A good chunk of the squad were away on international duty and those that weren’t, have not played for 3 weeks, which could threaten the Gunners’ momentum. However, most of Chelsea’s squad were also away on internationals. Arsenal have a 3 point lead over Chelsea with a game in hand, so a draw would not be a bad result, but a win would give them a huge confidence boost and instantly catapult them into outright favourites for the WSL.

TEAM NEWS
Long term absentees Dan Carter, Viki Schnaderbeck and Tabea Kemme are still absent. Vivianne Miedema picked up a kick on the shin in training which limited her to two substitute appearances for the Netherlands over the international break, but she should be fine to start. Sari van Veenendaal was left on the bench for both of Netherlands’ games too.

Sari is fit to play after picking up a knock in pre-season, but Dutch boss Sara Wiegman left her out citing a lack of match practice. Montemurro has a decision to make between Sari and Pauline Peyraud-Magnin, who has played each game so far this season. 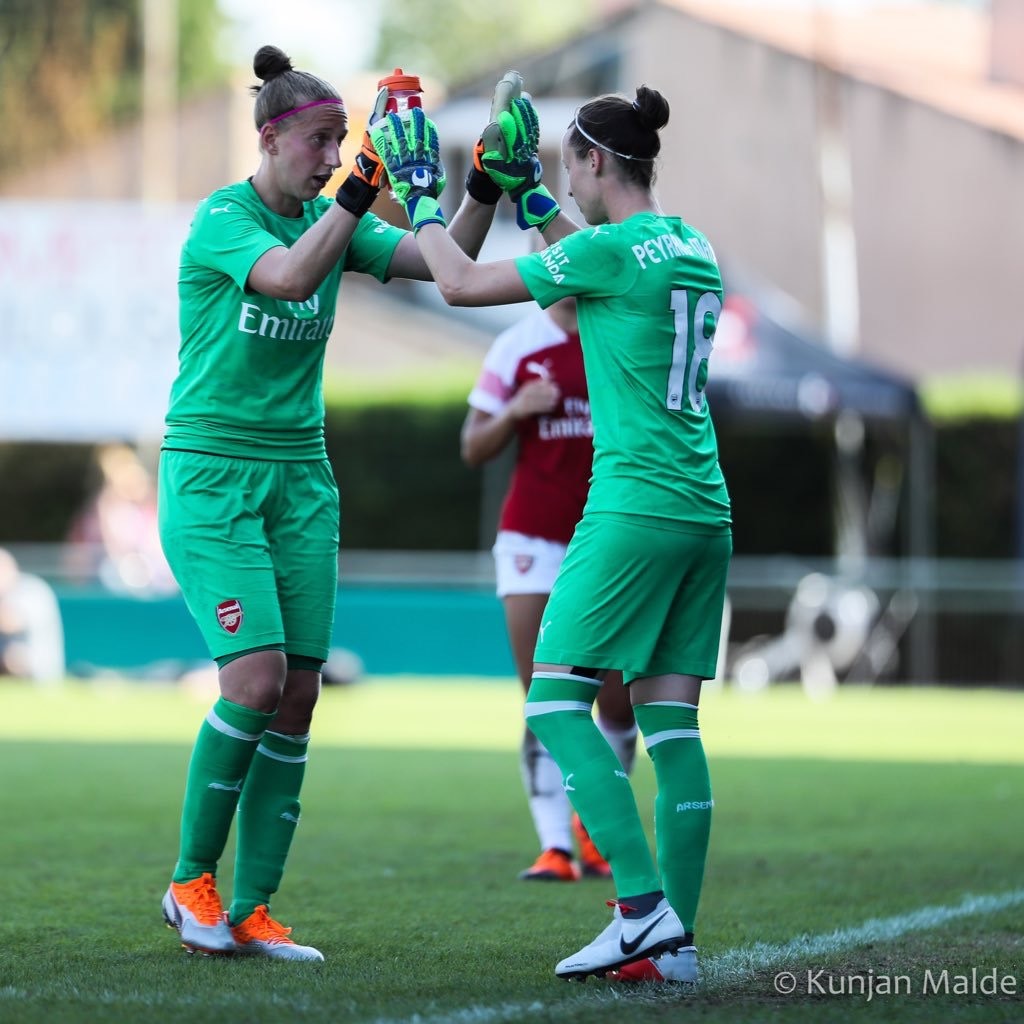 LAST TIME OUT
Arsenal didn’t manage to beat Chelsea last season, drawing 1-1 at Meadow Park in April prior to losing the FA Cup Final to the Blues 3-1 at Wembley. When the teams last met at Kingsmeadow Chelsea edged a very even game with a 3-2 victory. Arsenal are a better team now than they were then, but this still should be a close game between two teams committed to attack.

PLAYER TO WATCH
Danielle van de Donk has looked a different player under Joe Montemurro, playing a variety of positions across the midfield- even occasionally starring in a deeper role. Recently she has played on the right hand side of the Gunners’ fluid front 3, who interchange regularly. This position allows her to wade into the box without detection.

In front of goal, DvD is reliable, as evidenced by her poacher’s hat trick against West Ham recently. The Dutch attacker scored a last gasp winner in this fixture back in July 2016 with a smart, ghosted run and accomplished finish. Danielle is at her best when she flies under the radar.

HOW TO CATCH THE GAME
The match will be screened live on BT Sport from 1.45pm on Sunday, with a 2pm kickoff. The game is being played at Kingsmeadow (formerly AFC Wimbledon’s ground), tickets are £6 for adults and £3 concessions, you can buy them here or just rock up at the turnstile on the day.

COMING UP
We will have exclusive player reaction to the Chelsea game on Arseblog News on Sunday evening and later this month we will have a feature interview with Dutch striker Vivianne Miedema about her season so far.

There will also be the Arsenal Women weekly round-up on Arseblog News on Monday, as well as a match preview for the home game with Reading next weekend on Friday and some exclusive player reaction to that game next Sunday evening too. So there is plenty going on!

Thanks as always Tim! Loved the chat on the Arsecast today, and the articles are a very nice way to stay connected to the Women’s team. Excited to watch on tv this weekend!