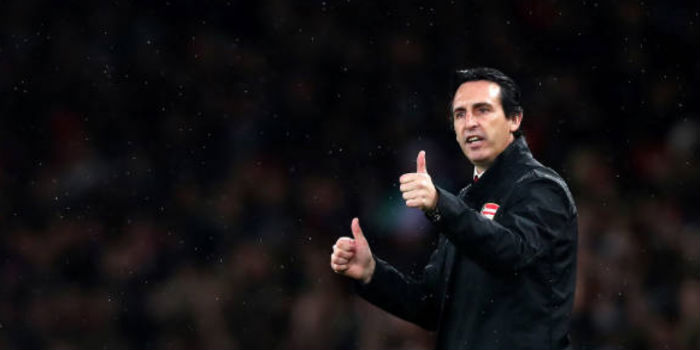 Unai Emery was pleased his mix-and-match Arsenal side could extend their unbeaten run to 13-games with a 2-1 win over Blackpool in the Carabao Cup, but he reserved praise for the League One side who gave the Gunners a fright on Halloween.

Goals from Stephan Lichtsteiner, his first for the club, and Emile Smith Rowe, his first at the Emirates, gave the home side breathing space before Matteo Guendouzi’s red card, for two bookable offences, swung momentum the way of the visitors.

Centre-back Paudie O’Connor reduced the deficit with a header that had Arsenal on the ropes for a few minutes, however, nerves settled when the same player was given his marching orders for a poor tackle on Pierre-Emerick Aubameyang with six minutes remaining.

After the match, Unai Emery was quick to praise the Seasiders.

“For me they are very organised,” he told his post-game press conference. “Tactically very good. Hard to win against them.

“I don’t know League One or the level for these teams but for us I know and I spoke with Steve Bould, and he knows the level for this team, and he said to me that every match is difficult. We needed a big performance with big preparation.

He added: “I think we controlled a lot of moments. When we are 2-0, when the match is in a good moment, the red card to Matteo threw the balance to them. Their goal also – we need to continue our work. Doing our work, we deserve it.

“That is football,” he said of Guendouzi’s red card, which now results in a one-game ban that rules him out of Saturday’s game with Liverpool.

“Things can be positive or negative like an injury, a red card, a 90 minutes of hard work, that don’t allow you to play other matches.

“A red card is like that. We have a lot of players looking to play to help us and take responsibility. His quality for the team, I am going to prepare with other players for the big match.

“He [Guendouzi] is playing well. He’s playing with a spirit. Competitive. The action is… it’s an action, he plays that action as a normal moment in the game. He is pushing behind the player.

“He is playing with the spirit I want today and every match. We have spoken. It is very important to control but I don’t think he lost control. The red card is one circumstance.”

The Gunners will now face Sp*rs in the quarter-finals at home, the week before Christmas. It’ll be the second North London derby in quick succession in December. Emery knows he’ll need to get up to speed on the importance of the occasion.

“Yes, I know [the importance]. I didn’t know like a supporter here in London.

“When we are going to play against them in the Premier League or like now in the Carabao Cup I am going to save a lot of information for this.”

Emery: Arsenal wanted to give me a new contract

Wenger had a great record against the Spuds, if Emery can get anywhere close to that he will have us loving him even more

what was the best game? Winning the league at Sp*ds in 2004? The 5-2 Sagna cannon header? Flamini to the rescue? So many great matches.

Unrelated, but it seems weird that a player getting a red card in a cup competition misses a league match in a different competition. Shouldn’t Guen. be suspended for the next League Cup match?

It was so many years to the day yesterday that we beat them 3-0 when Cesc scored seconds after van Persie had given us the lead by dribbling past about 4 Spuds. That was nice watching those highlights 🙂

I chose my username soon after that flamini game so no prizes for guessing which one I go with.
That Sagna header one was bloody special though – not just for that game but the run we went on after that ultimately saw us pip them to the champions league spot.

Only one bit of information you need to store Unai – what do you think of Tottenham??!!!!

Quoting Jack Wilshere.. I think they are shit!

They just need a Flamini.

Oh no, he said he will save a lot of information. Unai is gonna have a LOTR editor’s cut style, 10-hour long video about Tottenham’s tactics lol.

I knew we’d get the spuds. Season starts now!

I thought the second yellow on Matte was very soft, the player went down and was playing for it so a free kick should have been enough. He will learn, he just got mugged off by the old pros.

I agree 100%. Matt has a huge potential in terms of footballing ability, and he is just getting better and better everyday. when he is on the pitch, he demands the ball and more often than not, gets it, Testament to the fact that the team trusts him, and more importantly believes in his footballing ability and that in a team of grown men at only 17?…amazing! … but you also have to learn the darker side of football as well, certain things you don’t do when you are on a yellow, or you just do it smarter if you… Read more »

I like how straightforward Unai is with his interviews.

It’s nice to know Bouldy is helping! Can’t wait to beat those spuds in December!

Finally he says something.

Good opportunity to put Spurts in their place.

As for the red, I suppose it may have impact on Guendouzi over next game or so. If we get the fullbacks back, we have Granit and Torreira in the middle till Guendouzi can come back in.

The main issue now is fullbacks.

Good to see AMN back in. I presume Emery is quite confident we will get one of Sead or Nacho back in time for Liverpool.

Otherwise would have liked to see AMN played Lback today to get him in the groove of things.

“I am going to save a lot of information for this”…. Unai sounds like The Terminator, with his detailed files.

Pretty sure the ban only applies to the next round of the Cocoapop cup, there was a rule change at the start of the season. That leaves Guendouzi free for the 3-2 win on Saturday

Arsenal.com have confirmed he’s missing Liverpool. I think he was the best player on the pitch last night.

Red cards and the subsequent ban count across all English competitions (CC,FA,PL), an accumulation of yellow cards resulting in a one game ban only counts in the competition the yellow cards are accrued. For the league that is five, for the cup competitions that is two.

Pleguezuelo really impressed me. He looked really comfortable with the ball at his feet.

Asked about what he thinks of the North London rivals, Emery said, “Also it is important that the team provides the performance to manage each moment of cuntery from Mr. Harry Kane of Sp*rs. I talked to Bould about these cunts from Little Sister’s road and he said that a big performance is needed in each moment of the 90 minutes and also extra time”.