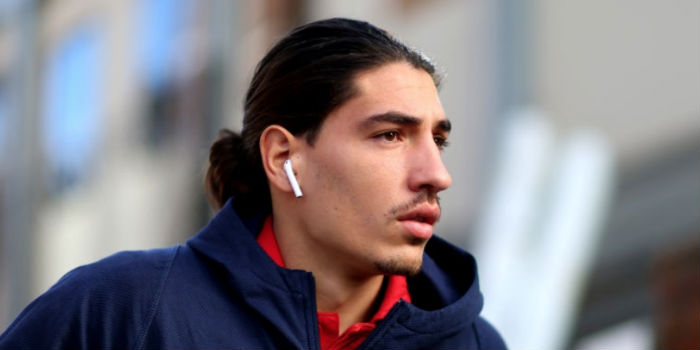 Unai Emery wasn’t in a position to rule Hector Bellerin in or out of Saturday’s game with Liverpool only that his compatriot complained of a pain in his muscle during half time of the 2-2 draw with Crystal Palace.

Stephan Lichtsteiner came on as a like-for-like replacement at the break but the injury problems that have hit the defence are a worry at the moment.

“Yes, he’s injured,” said Unai Emery in his post-game press conference. “I hope it’s not a big injury, but he had muscular pains.

“I don’t know [whether he’s a doubt for the Liverpool game next Saturday].”

Both left-backs Nacho Monreal and Sead Kolasinac were absent for the third time this week meaning Granit Xhaka had to fill in again in defence. While the Swiss helped himself to a stunning goal to level the scores he went on to concede a late penalty that ultimately led to two dropped points.

His lack of pace against the speed and trickery of Mo Salah, Sadio Mane and Robert Firmino will no doubt play heavy on the mind of Emery, who first has to field a side to take on Blackpool in the Carabao Cup on Wednesday.

Ainsley Maitland-Niles, selected at left-back for the opening day defeat to Manchester City, has returned to full training and got minutes with the under-23s as they drew 1-1 with Swansea this week. Judging by coach Freddie Ljungberg’s comments, we may not want to risk him out of position.

“He’s been training for 10 days or two weeks or so now and we were asked by the first team to play him for a few minutes and get him ready,” said Ljungberg after the game.

“He did well and of course he was a little rusty because he hasn’t played football for a long time, but that’s why he was in the game today, so he could get ready, feel it and keep up with the tempo in the game, so it was nice to have him here.”

Good luck Hector, we need you for Liverpool.

It’s a shame as he’s been looking better by the game but I trust Leinchteiner to fill in and do a job. My biggest concern is our LB position and of course Mustafi. Hopefully Monreal or Kolasinac can be fit and READY for the Liverpool game. I would rest all our starters on Monday, Liverpool won’t be playing midweek so we can’t play most of our starters, we just played 3 games in a week with most of the same players. I’d play Mustafi on Wednesday and never again in important games. He’s a headless chicken and he’s just a… Read more »

Is Mustafi this bad? I don’t think so. He is the current scapegoat that Arsenal fans like to have. He isn’t fantastic but none of our defenders are, we have no “world class” defenders, even Koscielny when fully fit isn’t world class.

I doubt Emery has been given the funds for any January purchases which is a shame as I do believe we are only 2 players away from really competing for the title.

None of our players are “all bad”, in fact few league players are. It’s about the ratio of shit to good. To toy with this idea: Xhaka is good probably 60% of the time. Bellerin maybe 70%. Lacazette maybe 75%. Torreira, at least 80%…. Mustafi is good about 40% of the time, and that is being generous, I think. In more detail… Ozil puts in a “galactico”-level performance maybe 5-10% of the time, good another 40% of the time and middling the other 50%. Ramsey similar but more consistently good I think. Then we can talk about aspects of play:… Read more »

Agree with mostly what N10 said. Basically you could have amazing team play and combination play. However one bad individual error and it counts for nothing. In that situation you have to resort to benching that player.

And with the amount of games coming up you need all your players in form. The only choice we have is to keep trying to improve him and ensure the players around him cover his weaknesses. Especially with the January transfer window coming up, someone will be desperate for a defender, and by then Chambers and Mavropanos maybe ready to come in.

@N10 Mustafi may be a bit of a chaotic defender right now..however he has many of the tools to be a top defender…. excellent passing, great heading ability and good enough positioning. His reading of the game is where the problem lies…he doesn’t know when to use which tool. That I believe can be improved with all the data that Emery and his team will provide him with over the course of the season. Maybe he can get better by doing as directed and by being drilled about situations by the manager and staff. Let’s be patient for now.

@Kartic Iyer, I agree with your critic of Mustafi, however it is the reading of the game that is crucial to a good (team) player and it seems innate in some. I do not know if it can be taught or even drilled into a player who lacks that ‘football intelligence’.

He’s bad. I just laughed at yesterday’s penalty conceded, it was so bad and inevitable. I love how people are like but he was going for the ball, the other player just nipped in. Yeah, what a revelation that is, there’s one ball and 22 players, how bizarre is it that another player went for the ball?! In the penalty box, of all the unexpected places! Accepting he’s bad will liberate both him and fans to an extent. Don’t expect defending, you won’t be disappointed. Just back us to score 4 goals a game, way more fun anyway. He’ll probably… Read more »

Does he make the same mistakes over and over again? That is where I get stuck with him. He doesn’t seem know when to stay on his feet and reduce the risk to his defensive position. Is this something coaches have been trying to teach out of him? I bet.

I have a lot of time for Lichtsteiner, he’s a very experienced dirty bastard imo.

People complaining about the Ozil substitution now because we drew the game…assuming we won I’m sure that wouldn’t have been the case… I support the removal of ozil…he couldn’t handle the physical demands that crystal palace were asking for…let’s not pretend like its today Ozil has come short with putting in the physical efforts when it becomes feisty……… I’m happy and sad about the draw…. Sad because we drew this game after fighting so hard to enter a winning position only to be undone by one single unwarranted pass from lacazette…reminds of the Chelsea game And I’m happy because it’s… Read more »

Agree mate. 2 points dropped today are going to give us that extra focus for the Liverpool game. Somehow felt our accuracy in front of goal today was much lower than our previous matches. After taking the lead we should have looked to dictate the tempo to see the game out, but for some reason that translated to waves of crystal palace attacks on our back line which had already conceded a penalty in the first half. You could tell we would concede another one. Will really need Hector up and ready for Liverpool because otherwise it’s going to be… Read more »

If we took Ozil off and played significantly better then no one would be saying anything. But we lost our ability to control possession after he went off, which is why people think it was the wrong decision.

Emery has made brilliant substitutions to date and we can’t fuss too much about today. We won 11 games in a row and drew away in a London derby. We have to keep our heads high and keep pushing this team. It’s a long season and a lot can change between now and the end of the season. COYG!!!

No Ozil was shit, it was the right decision.
And before you give me that “everyone was shit” bullshit, not everyone gets paid £350,000 a week & is considered to be a “world class” player.

Why are his wages relevant? Iwobi and Lacazette were far worse than Ozil today but as usual he is made the scapegoat

Agree with Martin – Ozil can’t really do much when the three in front of him are crap, which they were. Laca/Auba/Iwobi were just poor, and Ozil isn’t going to conjure up some miracle without those guys. He gets scapegoated even by our own fans, it’s a shame. He shouldn’t have come off, Lacazette should have.

Don’t get the thumbs-down for Chiza, completely fair comment.

Coach was thinking, we need a goal, the X factor, some energy, some physicality, let’s get Welbz in there.

Iwobi might have been a good pick to come out, but he and Welbeck have been playing really well together with Auba and Laca. Didn’t work so Auba out, though Laca looked completely spent out there today.

I still think it sends a good message: play as hard as you can, or sit it out. I think Emery is handling him well.

I think Ozil was replaced because we didn’t need him at 2-1 up. The idea was to bring on a fresh Danny to create havoc and maybe nick a goal. I hope Emery told him as much afterwards.

My thoughts were something along those lines as well. Get another physical presence in there to work hard and press. But it was definitely at the expense of some control of play.

Is it just me or does today’s draw feel bit like a defeat in that the manner palace goals only came via penalty, take them away and its a 2 nil win

Yes. More poignant is how we allowed them to tie the game. Going forward for a third goal and then making an ill advised pass to allow them to break. Kick me for saying, but that was Wengeresque.

Hope Bellerin gets better soon and we win against Blackpool and Liverpool. The two pools ?

If AMN is good to go I think we should try him at Rback…but of course if Kolasinac and Monreal are still crock then AMN left and Lichsteiner right.

Lichsteiner is going to struggle with pace.

Come next summer, we will have to make some decisions.

No Jenkinson. Arsenal fan sure, but so am I.

Whereas Arsene did really well, spending £35m on Mustafi.

Klopp’s speciality is to create overloads on full back positions. We gotta be careful with our balance in the wide positions.

Let’s hope Hector is okay for right back, we find a solution at left back and ensure Mustafi doesn’t get sucked out of position by Firmino (his speciality).

Alot of work for Unai to do. But I have confidence in him.

I’ve never quite understood the negativity aimed towards Bellerin.
He’s a brilliant young right back.