Arsenal Women manager Joe Montemurro has signed a new long term contract with the club. The Australian replaced Pedro Martinez Losa last November and has impressed with a 78% win ratio.

Arsenal have started the season excellently, with a 100% win record, they top the WSL having thrashed defending champions Chelsea 5-0 away from home on Sunday. 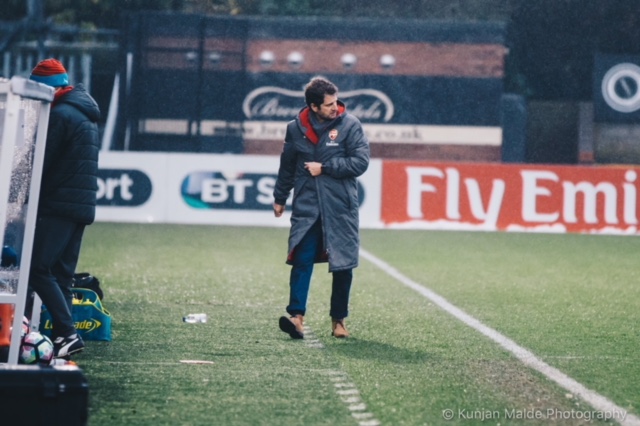 Arsenal head of football Raul Sanllehi told Arsenal.com: “Joe has an outstanding track record as a manager and has made a huge impact since joining us last November. We’re delighted that Joe has signed a new long-term contract with us and look forward to working with him to take the team to future success.”

Montemurro said: “I feel honoured to have signed a new long-term contract with Arsenal. We’ve been working hard this year to reinvigorate the historic and special qualities of this team, and to implement an attractive style of football. We’re pleased that recent early season results have so far reflected the hard work.

“I’m working with some of the greatest female footballers in the world and with a top-class support staff. We have incredible support from the wider Arsenal Football Club and I’m really excited to continue my role. I feel at home here – we are one big family.”

Previous articleArsene Wenger: Dogs set a great example
Next articleWilshere: Ramsey would get into every top team in the Premier League

Just when I feared that Man City and Chelsea would relegate us to the ‘also ran’, Joe pulls the rabbit out of the hat. I’ve been impressed with our team this year; I just hope that we can return to our true dominance

I agree. With Man City and Chelsea being the media darlings I really did fear for us. Once again we have dug deep and although it’s early days the signs look promising.

If I’m not wrong, we already have a goal difference of more than +20. That in itself is impressive.

We have only scored 19 goals…

Why thumbs down for correcting a mistake?

Sensational start to the season, glad he is signed up.

Why did I read that as Jose Mourinho? My heart almost stopped

This is wonderful news.
“I’m not a smash-and-grab manager who goes in there, saves a club from a tight spot and then leaves. It’s about building a group and developing a DNA. It’s really, really important that everyone’s on a journey and everyone’s involved in a process to build something very, very special.”

He couldn’t be more Arsenal if he tried. An absolute godsend.

Everything about Arsenal this season is sensational. ?COYG