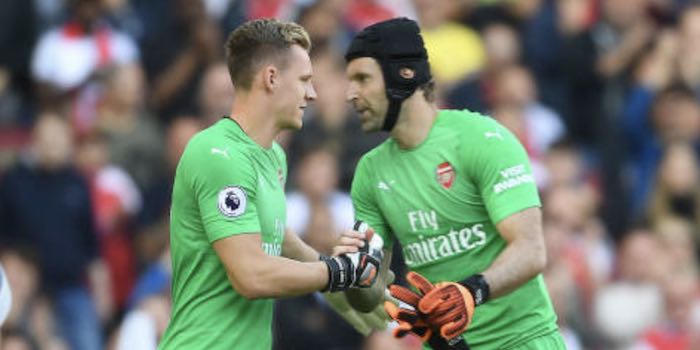 Bernd Leno says he feels sorry for Petr Cech after the veteran keeper suffered a hamstring strain in the 2-0 win over Watford last Saturday, but says he’s ready to take the opportunity to cement a first team place.

The German signed from Bayer Leverkusen for £22.5m during the summer, but has been restricted to the cup competitions after Unai Emery went with the experience of Cech in the Premier League.

The 26 year old has admitted his frustration with the situation, but insisted he’d remain patient until his chance came and now that his teammate will be sidelined for around three weeks, the time is now.

“I don’t want to say it wrong that I am happy for Petr to be injured. I think always it is a bad feeling, so I feel sorry for him.

“But, now I have more opportunities to play and I will concentrate on the games.”

He also expanded on how hard he’s found it to kick his heels on the bench, and how Emery has dealt with that frustration.

“I wanted to play all games, the first games against City, Chelsea and West Ham,” he added.

“It’s difficult to sit on the bench but the coach said to me ‘Don’t be disappointed or sad, just train hard’.

“He has worked with many goalkeepers and the goalkeeper is a very special position. It needs a little bit more time for your personality and confidence and feeling with the defence.

“I was calm and worked very hard every day. I’m happy that the coach gave me some games in the Europa League and Carabao Cup.

“The two games in the Europa League and Carabao Cup were very important for me to get the confidence with the defence, get a feeling with the team, and also for the players to play from the back.

“So, it was good for me that I already played those two games in the cups.”

As Leno is now needed for the Premier League, it seems likely Emi Martinez will play in the Europa League on Thursday, so Sunday’s trip to Fulham will give him another chance to showcase his talents.

Check out the 250th Arsecast Extra!

Leno: It’s not the time for self-pity

Not too difficult games in October, has a chance to bed in.

Hope he does well and the defence protects him.

It’s great to have this healthy competition in our squad and will only get the best out of both Petr and Leno. I thought Leno was superb against Watford and hopefully he can give the manager a real selection headache once Petr is back.

Wouldn’t mind seeing him start the Europa game, give him a bit more match fitness and start building the communication with the defense

Agreed. Goalkeepers wont fatigue by playing three times in a week. Plus he’s screaming out for games so i’d personally keep him in the line up. At least until Benjamin Button returns.

It’s more the travelling that we should worry about surely? 5hrs each way will take it out of a player regardless of whether they play or not

It’s more the chances of picking up an injury rather than an issue of fatigue (Petr Cech on Saturday is a case in point).

It would not be sensible to risk Leno in mid-week and potentially have Martinez as our only fit GK for this weekend.

Leno looks extremely agile and quick off to close down space between the lines.
He certainly looks talented, but like Mustafi and Xhaka seems to have lapses in concentration, hopefully the urgency Emery brings will start rubbing off on the players.
Thought Leno, Xhaka, Bellerin and Holding were very good on Sat, despite a pretty poor overall team performance.
I think there’s a very good argument to start both Welbeck and Iwobi in the wide areas away to Fulham.

20cc of nofukuperol for Mustafi before each match.

It’s your time to shine, Leno. Don’t let us down.