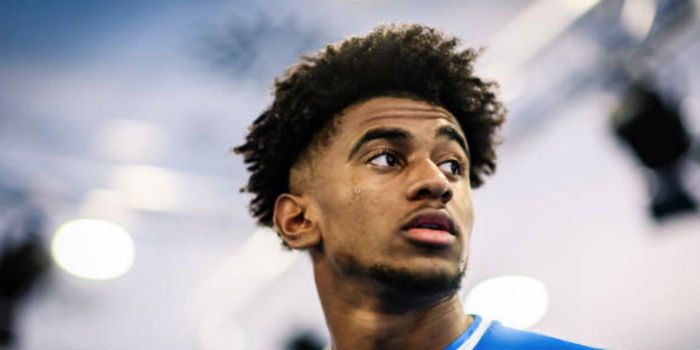 Reiss Nelson says he’s taking each day of his Hoffenheim adventure as it comes and admits he never envisaged playing in the Bundesliga at such a young age.

The 18-year-old has made a huge impact in Germany since joining Hoffenheim on loan in the summer, scoring four goals in five games which have in turn earned him a call-up to England’s under-21s.

All in all, it’s been a whirlwind few months for the boy from Lewisham who maintains that there’s more to come.

“I would never have expected myself to be in the Bundesliga at 18, in such a big league like this,” he told Bundesliga.com.

“I just have to take every day as it comes, keep practising, keep asking questions to all my teammates, the coaches. Keep my feet on the ground and keep going.

“I’m liking the Bundesliga,” he added. “There’s a lot of top, top defenders that you come across.

“It was always going to be a challenge so when I got the offer to come out here I was excited, knowing it was going to be such a big challenge for me. As a person and as a player, I wanted to take the next step.”

So far, Nelson has been utilised across the Hoffenheim frontline by coach Julian Nagelsmann. While he thinks he’s best suited to the number 10 position, he also knows he can cause mischief wherever on the pitch he gets game time.

“For me, as long as I’m in the starting XI then that’s fine. I think the boss plays you in a position where he thinks he’s going to get the best use out of you.

“As a number 10, or a second striker, there’s a lot of good positions where I see myself and I can go on and do damage if I listen to my teammates and coaches.”

All going well, Nelson, who signed a new long-term deal at the Emirates before moving to the continent, should return to London to challenge for a place in Unai Emery’s squad next season. Until then, he’s hoping to keep enjoying himself.

“At the moment I’m very happy here. I’m playing, I’m scoring, but I’m an Arsenal player at the end of the day, so I have to stay and do my job here, then wherever football takes me I’ll go.”

If you’ve got a spare five minutes, Nelson’s full interview, in which he talks about the importance of his family and his friendly competitiveness with fellow Bundesliga starlet Jadon Sancho, is worth a read.

High hopes for Nelson. Could he be our answer to a winger? Hope he has a successful season, and most importantly develops further

I’m actually wondering if the mix of Nelson being able to play on the wing mixed with us having to many men in the middle of the park (Xhaka, Torreira, Guendouzi, El Neny) played a part in us being willing to let Ramsey walk. Nelson looks like he has the best chance of succeeding since the Ox I’d say, even though he didnt turn out as hoped.

Thank God we tied him to long deal. Super excited.

At least he wasn’t drinknig in L.A.

He appears to have a pretty cool head for that age. Emphasising the need to listen to his teammates and coaches constantly. Cannot wait to see him in full flow at Arsenal. The future is bright!

I hope he ends up finding more joy on the wing. If he wants to get into our first team that would be a much easier path than through the middle. I believe we now have four, or five, on the books now. (if you count Smith Rowe)

Nagelsmann seems to be a very bright coach, someone who could one day coach one of the major European clubs, so Reiss is in very safe hands.
He looks likely to return to Arsenal next summer as a fully rounded and mature player.
We need to send a few more of our best youngsters to Germany if it’s at all possible.

A Different George
Reply to  allezkev

Well, he is already taking over RB Leipzig next season. (A really odd practice, announcing a whole season early that a coach will move to one of the teams he will face. I thought only Bayern did this, out of extreme arrogance, but apparently not.)

The problem I have with the Nelson loan is whilst it benefits the young lad entirely, it may not necessarily benefit us as a team concurrently. Particularly with the scarcity of assets at the moment in the squad that can provide wide area pace, it would have been useful to have had Nelson already promoted and playing a role rotating with Iwobi, Aubameyang and possibly Mhkitaryan. As I mentioned before, just as like in defense and midfield, this is NOT zero sum game. In midfield we need all 3 of Torreira, Granit and Guendouzi to rotate through the 2 deep… Read more »

Must be strange to be there.

Wasn’t he at the Nile too?

To be fair, there was no such thing as ‘Germany’ in his lifetime.

Kristoffer Olsson on the pitch for AIK too

Celebrating in front of the Malmö bench too heh

make him our number ten next season, and have ozil as his back up, that would be a positive move in the right direction

Afan you’ve excelled yourself. Even by your standards that is funny. If it was anyone else I would see a sense of irony in your comment

I hear yiunlot lost by one touchdown last night….