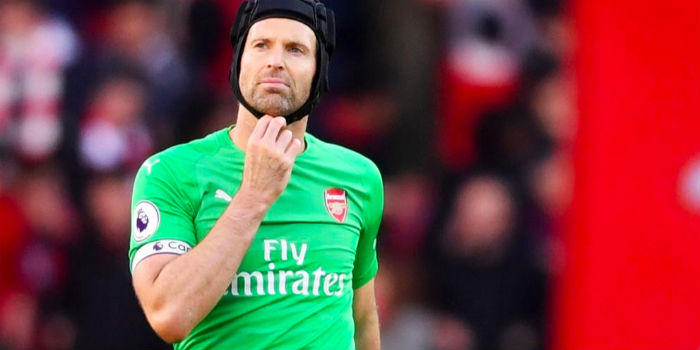 Unai Emery has confirmed that Petr Cech will start tonight’s Carabao Cup tie against Blackpool as the 36 year old continues his recovery from a hamstring injury.

He hasn’t played since the 2-0 win over Watford on September 29th when he pulled a hamstring just before half-time. Since then Bernd Leno has been the first pick for the Premier League, but Cech will get a chance to impress tonight against The Seasiders.

Speaking ahead of the game, the Arsenal boss was asked about the goalkeeping situation and said, “In each moment for each match, we are going to give the goalkeepers the opportunity to help us.

“We are looking for the confidence in each goalkeeper, but now at the moment, Petr Cech will start the Blackpool match after coming back from his injury.”

With Liverpool visiting on Saturday, Emery will have to choose his team tonight wisely, with ongoing defensive concerns, and a need to keep people fresh for the weekend.

However, he says he’ll pick a team which will respect the League One opposition this evening.

“We’re looking for a good performance from the team, and also to give the players the chances to help us with their performances,” he said.

“We respect Blackpool, and we will take the responsibility to have the best performance in each competition so that we’re able to win the match.”

First to comment…. I want to thank all this who have supported me, this is dedicated to you all!!

*Those…… Bloody autocorrect won’t let me be great in peace

Anonymarse
Reply to  Unai are meant to be together

Unai are meant to be together
Reply to  Anonymarse

Why so salty though…. Trying to put a smile on faces and you’ve just decided to frown for no apparent reason

Sunday was the first real sign of fatigue in players, tonight should be a chance for the real fringe players to play. I’d almost hold off playing players like Ramsey/Mickey so they’re completely fresh if needed Saturday. Liverpool is a chance to show how far we’ve come since the start of the season.

Decent line up although think I would save Papa for Saturday. The last thing we need is more defenders damaged. Elneny defo won’t be playing, he’s injured for a couple of weeks.

And where will this game be held? At the hospital??

Not sure too much can be read into this given he’s just back from injury. Still good to have him back competing. Personally I think I’d sick with Leno against Liverpool. He’s mostly been OK and his weakness seems to be in the air. Liverpool are not the biggest of teams in terms of their front line so hopefully that won’t be an issue.

Time to pick some u23 that has been training with the first team for a while now.

Cat breath is one of the worst smells imaginable.

Might it be the increased training intensity which is resulting in the amount of injuries?

I am not sure we are worse off than we used to be. I would suspect that some of the injuries are down to some players being overplayed. In either case there is every reason for heavy rotation tonight .

Anyone know if the game is being televised?

Not in the UK, but hopefully there will be a foreign stream available. A trip to Ronaldo7 might be in order.

This is always useful – https://www.reddit.com/r/soccerstreams

DAZN (pronounced Da Zone) will be showing it, but that is in Canada.

Google “reddit soccer streams” my friend. thats what im doing since the broadcaster which has a monopoly in my country decided not to show the league cup this year.