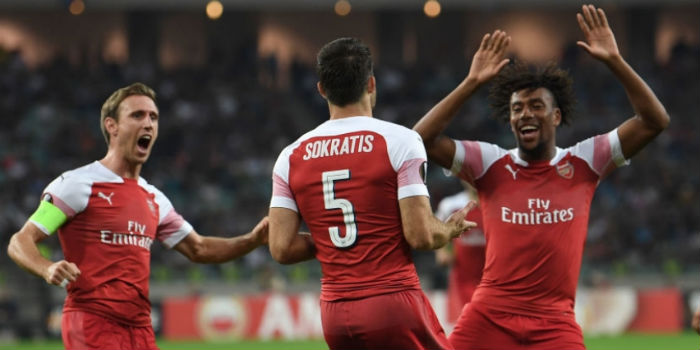 Arsenal may have recorded a third clean sheet in four games with a 3-0 victory over Qarabag in the Europa League but centre-back Sokratis admits the Gunners were lucky not to concede in Azerbaijan.

Not for the first time this season, Unai Emery’s defence was left exposed at key moments and were it not for some wayward finishing, a correct offside decision and some smart saves from Bernd Leno the evening could have been far less comfortable.

After the match, Sokratis, who grabbed his first goal for the club when he deflected a Nacho Monreal header after 4 minutes, underlined the need to improve despite an eighth successive win.

He told Arsenal.com: “It was very hard and the other team played well – they lost a lot of chances! We won, we are very happy, we need to work harder and we need to improve.

“We know that some things aren’t going good and we have to work harder and we are in this way.

“[Keeping a clean sheet] this is the most important thing. I’m very happy today, also for the last games where we defended well, but still we need to improve and the other team wasted a lot of chances.

“We have been lucky in the moment and we know we’ve been lucky, but we have to work harder and I think it’s getting better.”

Emery set his side up with three centre-backs but reverted to a four man defence at half-time after feeling his side had ceded too much room to their opponents in the midfield.

While the Spaniard may not have been particularly happy with his original tactics, Sokratis noted that it’s a system he’s enjoyed at former club Borussia Dortmund.

“Our manager knows well, he tries a lot of things and this is very good for the team. I think we’re on a good road.”

It would be hilarious if he actually forgot what the OTHER team were called ?

Also, is it just me or does Qarabag sounds like it should mean “bag of crap”?

We literally have a team that has the word Arse in it. Maybe making fun of other team’s names isn’t the smartest thing?

We are in a good way.

Still improving. We will only get better. Keep the winning run going and the clean sheets when we can. Improvement was the desire this season and it’s starting to happen. Fair play to all involved.

I would love to see us play a 4222. Emery tried it with Xhaka and Torreira against Lazio (I think), during pre-season. Atletico Madrid manage it very well and we have players to get that system right. Emery himself said that the 442 is harder to break down and we are already playing a variation of it currently. Ramsey is usually up top with Laca and offering movement down the flanks, while Laca holds up play. I think Aubameyang is technically not as good on the ball to be our roaming second striker but he would be better up top… Read more »

Nice analysis, but way too long. This is the comment section, not the alternate blog section, keep it simple.

Kwame Ampadu Down
Reply to  Gabe

santori-itis is catching it appears. Fingers crossed this plague is stamped out before the Republic of Arseblog is destroyed.

Hey I like his analysis. This isn’t twit’ter. I don’t agree 4-2-2-2 is a good system for us but a good breakdown is a good break down. I think 4-2-2-2 is too narrow and reliant too much on the fullbacks. This creates issues both in the space behind and for the Cbacks who have to shuffle over to cover. IN part we are trying to negate the later with Torreira dropping into the space between the Cbacks. But the 4-2-2-2 is in fact being used. And it is being used bc of the assets Emery has on hand. He does… Read more »

What are you afraid of?

This is a great venue to discuss things.

Blogs is one of the most receptive of ALL opinions.

Or are you only receptive to things you want to hear?

Good analysis but most important is to play 2 strickers upfront

Finally, we have a winner mentality

santori
Reply to  Jack but

We r still giving the other side too much opportunity to regain confidence.

We’ve seen that Emery is open to tweaking the formation to suit his players. Here, i think, the 3-4-3 is used partly to fit both Monreal and Kolasinac in the team. Would it be a stretch to hope that he tries something like a 4-4-2 diamond to fit in 2 strikers while still using all those midfielders?

It was a reasonable opportunity to try 5 at the back at Qarabag.

The players had issues getting the balance right which is natural.

But even after switching to back 4, we were still vulnerable.

Some decision making issues still. Even Sokratis made mistakes, once attempting to pass out from the back but giving it straight back to them.

One refreshing change from the Wenger era is us winning, while not playing well.

Admittedly 8 wins, but against very weak opposition and we haven’t needed to play in a convincing way, (I guess a pleasure of playing in the Europa). We should get to 12-13 wins before we are next tested against Liverpool. The real measure of progress this year will be how we play against, City/Liverpool/Chelsea/Spuds. It’s a mini league for the top four, that we used to take for granted but that now we are taking as a real achievement. I haven’t seen us play long stretches of good possession/good passing yet. Qarabag had much better quality possession in the middle… Read more »

Wenger was also a long way from reaching good Wengerball for the last years of his tenure, with some horrible results against the top teams. This team has kept the flair and added a determination that had been lost, and is working hard to find solutions. The defence is a work in progress and the tactics and subs are positive. I’m enjoying this new set-up very much, it’s a breath of fresh air after the last few seasons of stagnation.

Weger’s problem has always been he was slaved to his own philosophy. It worked in the late 90s early naughties bc he had the pick of a golden generation in europe when the PL was still largely resistant to foreigners and TV money had not yet afforded the lower clubs ability to purchase foreign players. Also he tended not to believe in intervention (timely or otherwise) preferring to let the team work issues out on their own. This is OK with attack but defense without direction became problematic and most of the time we looked lost. When he did intervene,… Read more »

Wengermites we have moved on and the club is currently winning points from matches that they previously used to throw or gift away. That’s good enough, while we wait for further improvements to solidify the team. Please move on as well and line up behind the team.

For sure we have yet to hit the sort of gold class footy Wenger delivered but there are some signs of relations on pitch improving.

The important things is to get basics down first.

Still work in progress defensively AS A UNIT.

Emery is a realist and he is working at it in as pragmatic a manner as possible.

we was VERY lucky sok

Yes, no MUstafi this time to blame and we still have huge defensive issues. 1)Part of the problem of course is we sat too deep with the 5 at the back trying to absorb pressure. They were surprisingly good with ball at feet and our midfield was out manned Emery tried to address the issue by going back to a back 4 and Torreira coming in/Elneny pushed forward to put pressure higher up but this did not entirely relief pressure on our backs. 2) Kolasinac was also not at the races defensively. Understandable bc of lenghty lay off but that… Read more »