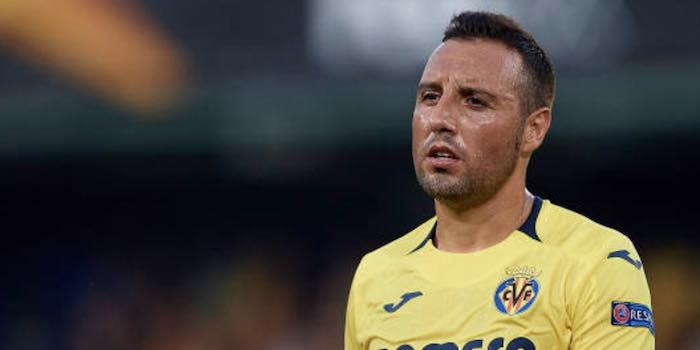 We know Santi Cazorla isn’t an Arsenal player anymore, but you’d have to have a heart made of stone not to be delighted for him after he scored his first goal in over two years to grab a point for Villarreal in their Europa League clash with Spartak Moscow.

The Spanish side were losing 3-2 when late in injury time they were awarded a penalty. Up stepped the former Arsenal man to equalise, the first time he’s found the net since September 2016.

Coincidentally, that also came from the spot as he kept his nerve to score a 90th minute winner for us against Southampton at the Emirates.

You can watch Santi score the penalty here.

After everything he’s been through with that horrendous injury, it’s a good news story to see him back on the scoresheet, and hopefully it’s the first of many as he makes up for lost time.

It was sad that we never got to say a proper goodbye to a player who was so popular during his time with us, but maybe the fixture gods will do what they did for Robert Pires some years ago, and draw us against Villarreal as the Europa League progresses (it was CL for Pires, obviously).

Happy to hear about santi success

Runcorn Gooner
Reply to  Jack but

Never know we may draw Villarreal in the knockout stages and have a proper farewell visit.

Ram
Reply to  Jack but

Guy only scored a penalty and the wankfest begins.If he weren’t injured he would have been considerd another denilson.Injury covers up shortcomings and makes people believe “If only x waas here,he would’ve fixed everything” but that’s not how it works.before his injuries began he was getting regularly lambasted for his performances.made a career out of that one game vs city.But still,HE SMILES!!! WHAT A NICE GUY!!! if only ramsey had that charm people would call him second coming of Pele.It’s a game,not a beauty contest.merit should dictate how one is viewed.

“he would have been considerd another denilson”

With all due respect, I don’t think this website is for you. If you want to cultivate a persona of a negative troll, I’d advise you to go somewhere else because nobody here is interested in this kind of nonsense.

And if you really believe what you’re saying, that’s even worse.

If it’s not a troll then it must have a very sad, lonely and desperately native life. Sad either way.

So is the wankfest still going or did I miss it?

Blogs, with all due respect, you need to drop the banhammer on this one.

Thank you for this post, Blogs. We have enough people showing their behinds here, and you saved me from showing mine.

I’m having a great deal of difficulty remembering him being ‘regularly lambasted’. Can’t remember it happening even once, to be honest…..

You’re not an arsenal fan, are you?

it is very clear just like daylight that you have never seen or watched the Spanish magician play football or youve seen just 2 games of him playing or even better , you watched him play from your radio and not your tv.

Twisted cuntloks
Reply to  Jack but

I mean whoever the fella was that won the pen it was a ludicrous dive… but I’m super happy for Santi that he gets to enjoy this Indian summer after such an awful time of things.

That fella who won the penalty was no other than Jose Funes Mori, formerly of Everton. The song the Toffees had for him always makes me smile somehow: “What’s the story, Funes Mori?”

It’s kind of what happens when you get tripped and pushed at the same time…..while trying to get a shot away. The defender knew exactly what he was doing.

I would be more than ok if Arseblog updates us whenever Santi does something of note!

also, ryo myaichi scored in a friendly for St. Pauli on his combeack two weeks ago.

Hey, he even scored the winning goal in a league match shortly after. No stopping Ryo now!

my mistake, it was the league match gainst Ingolstadt aaaaand it was a header!

Agreed. I love the Cazorla news.
If I had kids, I’d name them all Santi Cazorla.

This is just awesome so happy for him he deserves this ,and love that we still have “Santi watch” even the Spörs fans I know have love for that guy.

I know footballers are filthy rich now and everything, but surely a testimonial for Santi would be something we’d pack the Emirates to watch.

Have a statue. Have two.

One of him after scoring that FA Cup final free kick. And an animatronic one of him doing that little jig.

That Free Kick! OOOoosh! Thanks for reminding me, I needed that today!

Goosebumps, tears in my eyes. The stuff he’s gone through and come out the other side fighting is incredibly heartwarming.

Santi will hold special place in my Arsenal heart forever.

It’s your blog, Blogs, not mine, but I think you might consider “afan” in the same category as “Ram.”

Caught in two minds
Reply to  A Different George

Just let them be. Otherwise they will be back under different names. At least this way we know which two trolls to ignore and not waste time reading their comments….!

This is the other one you really need to get rid of, Blogs.

If you don’t love Santi, you are dead inside

Or a troll, as we’ve seen a couple incidences of above.

Not just a goal, a meaningful goal. Happy for him.

Thanks Blogs. It’s a quality pen as well.

Just a superb player all round.

Torreira has some of his traits but the two footedness of Santi makes him so much more dangerous and he got pivot his way out of any trouble.

I miss his runs and passes. No one really has his vision right now at the Emirates

Just watching the pre-match interview with Unai Emery and realised he looks exactly like Santi Cazorla without the perma-smile. The spirit of Santi lives on in the squad.