Arsenal 1-1 Wolves: By the numbers

Arsenal’s unbeaten streak continues with a fortunate draw against Wolves. The trend of Arsenal not playing well and still coming away with points also fortunately continues. With the inter-lull Unai Emery has an extra week to figure out how to get Arsenal back to winning ways and to improve the performances from the gunners.

Arsenal 1-1 Wolves: By the graphs 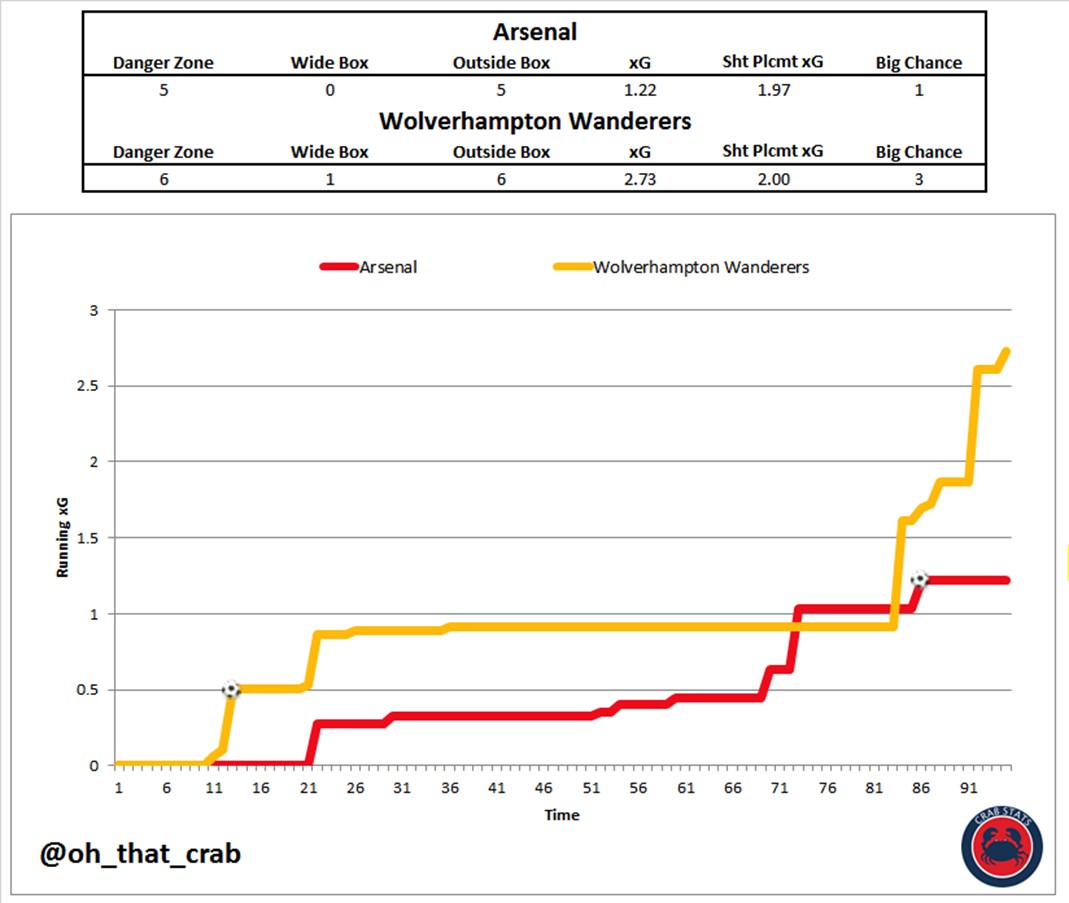 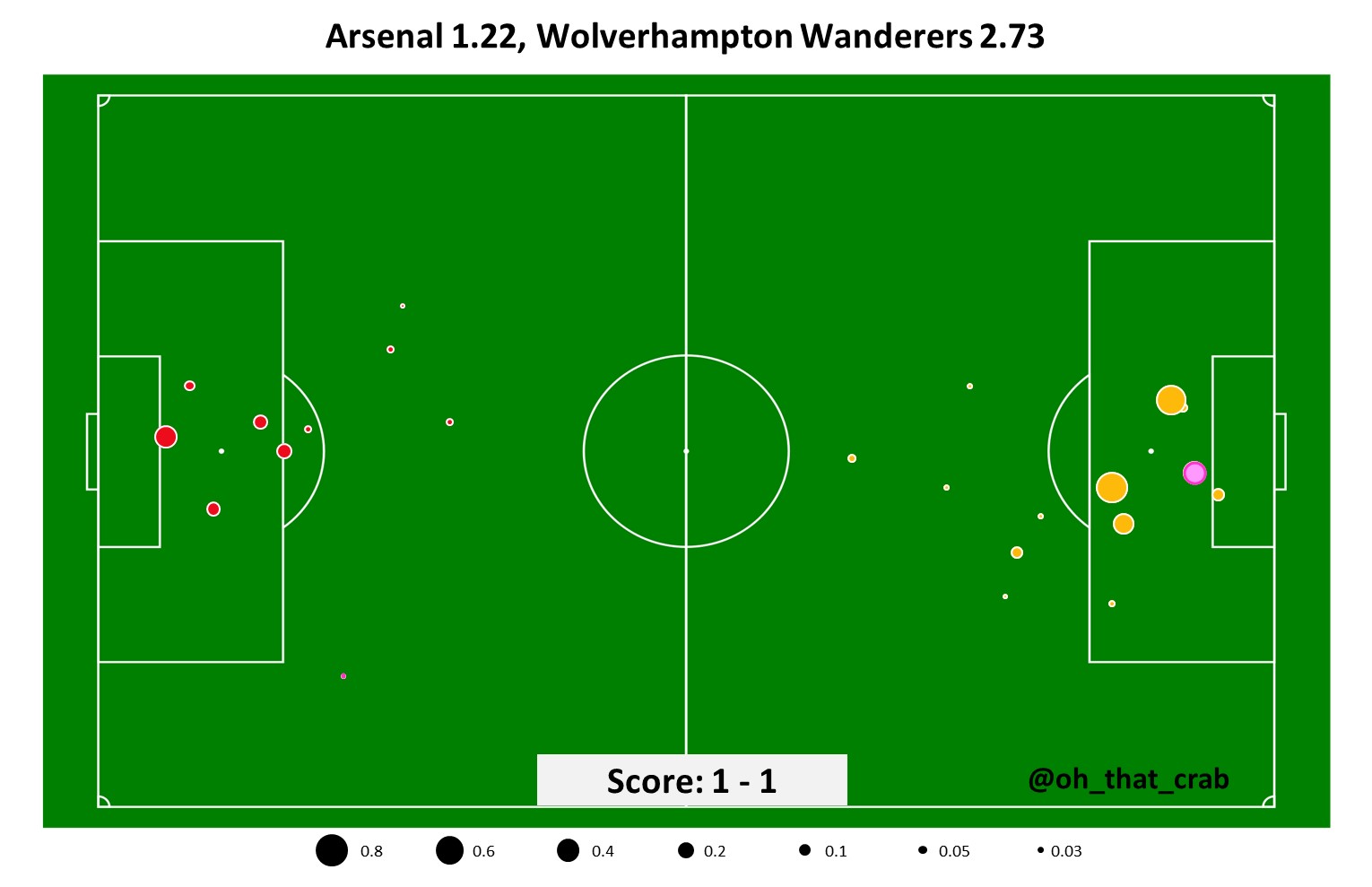 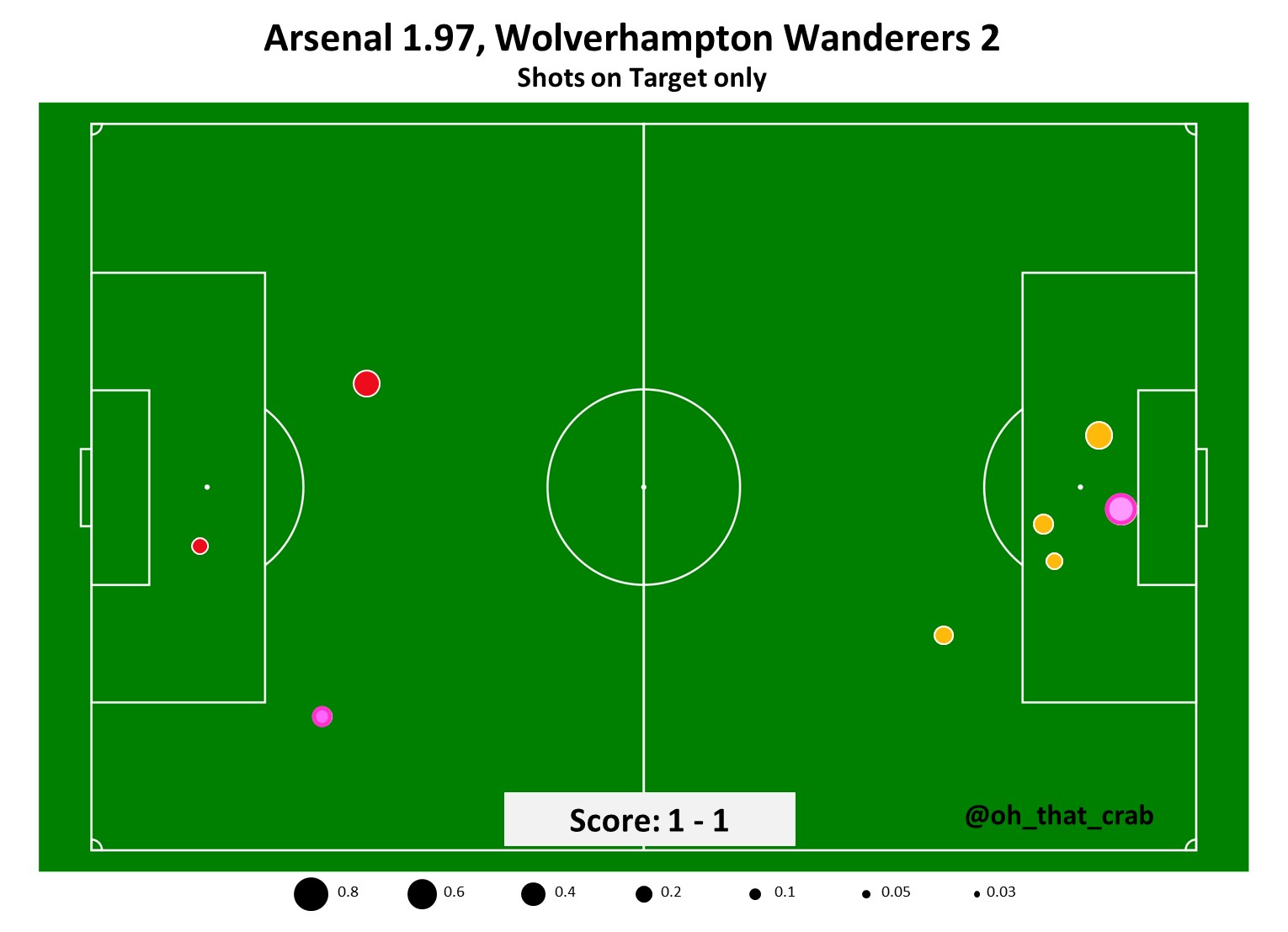 Match Result Simulation based on shots 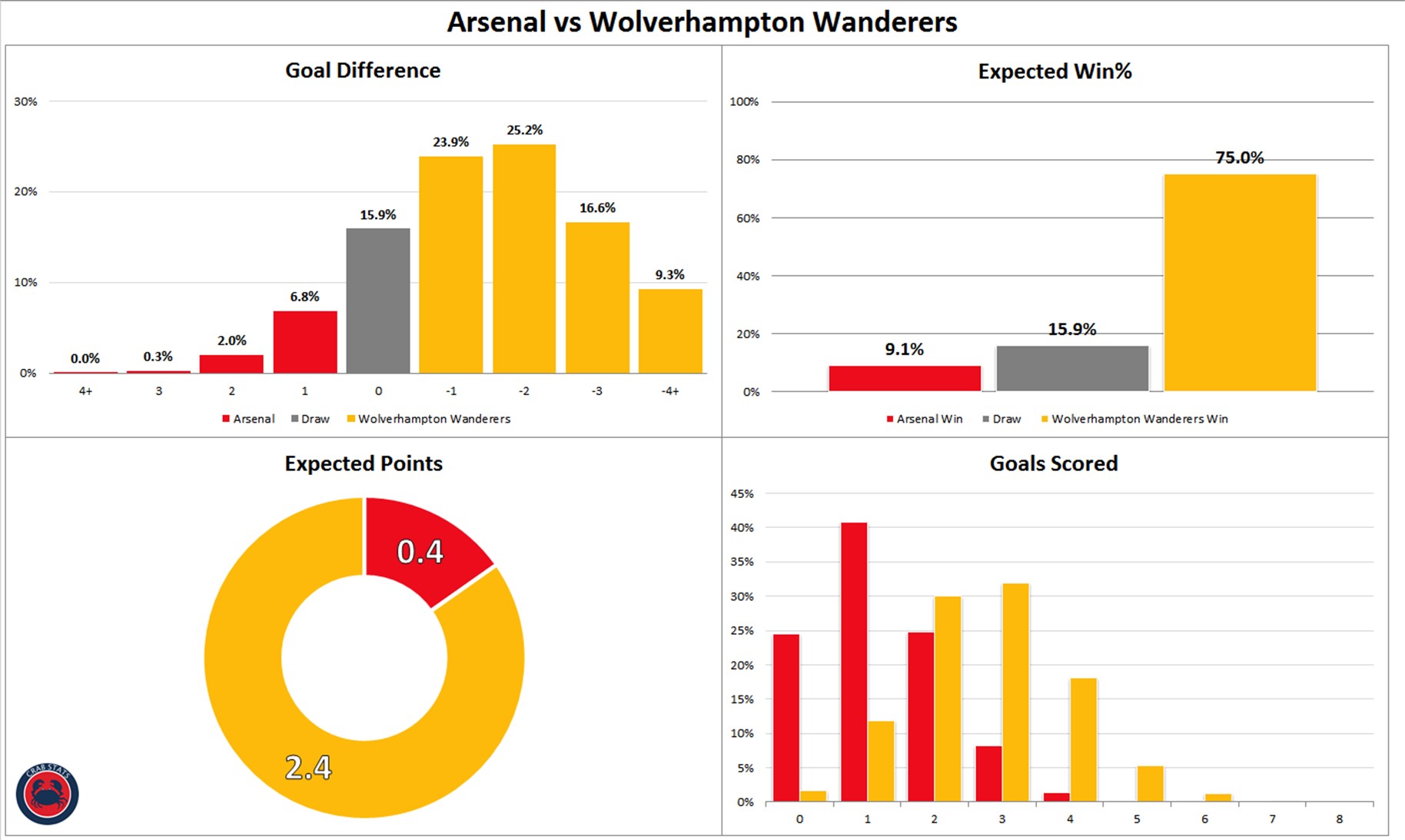 Arsenal 1-1 Wolves: By the numbers

257 and 91 – Final third touches for Arsenal and Wolves

23 and 20 – Touches in the box for Arsenal and Wolves, Arsenal dominated the ball but were stifled by the deep defending of Wolves

39 and 69 – Total long passes attempted by Arsenal and Wolves. Arsenal completed 56% of their long attempts compared to 45% for Wolves.

Like so many matches that we have watched with Arsenal over the years, Arsenal gave up an early goal to a “lesser” team and then struggled to break down a deep defense. The stats really show the differences in approach between the two teams in this match.

Arsenal had just under 72% of the possession but could not find the final ball to cut through Wolves. Wolves on the other hand, played direct football just about perfectly. They looked to play long early and often. They looked to strike out against Arsenal’s defense that had pushed forward in search of the equalizer on just about every chance once they won the ball back. It worked well, creating 5 (!) fast break chances in this match. That more than doubled what Arsenal had allowed this season in one match.

Sead Kolasinac has a match to forget

When Arsenal watch this match back in their video session, Kolasinac will probably want to try to hide in the back. This is probably among the worst overall performance for Kolasinac since he joined Arsenal.

He didn’t have a ton of protection with Pierre-Emerick Aubameyang as the forward in front of him on the left. That should give some leniency to analyizing his performance but can’t excuse all of the issues that he had.

Wolves looked like they really singled out the Arsenal left hand side as the area that was their weak point. Almost all of their dangerous possession came attacking down that side (until the very end where all it took were simple balls over the top) and a total of 55% of their attacks came down that side. Before this match, Wolves were right sided dominate with 44% of their attacks going down that flank but in this match they really turned up the pressure on that side.

Kolasinac has shown in his time with Arsenal that he is pretty good going forward but he is a real liability defending as a part of a back four. This performance is further evidence in my opinion that he isn’t a good fit for the type of team that Arsenal want to be.

75.3 – Average time in seconds that Wolves took on their substitutions, fora total of 3:46

6 – The number of minutes added on by the referee

10 to 12 – The number of minutes realistically that should be added on, (figuring in 15 seconds for free kicks and goal kicks)

Time wasting is something that drives me crazy and if the FA doesn’t want it to continue could very easily be fixed. The first would be to actually card players for wasting time, too often it is a card that comes out in the 90th+ minute and means nothing. The second would to actually have a person looking at the amount of time that used beyond some reasonable benchmark and to actually add that back at the end of games.

In this match, it was obvious that from pretty much the opening whistle of the second half Wolves were going to milk as much clock as possible off of the clock. Looking at things and they probably shortened the game by 6 or more minutes just from staying on the field while inured, taking as long as possible on goal kicks and free kicks and leisurely coming off the field on subs.

For this section I am going to present four teams and their stats without disclosing the team names. Look at the stats and try to rank them based purely on the numbers that they have produced this season.

Team A looks to have good shots differential but is giving up more big chances that they create and that cancels out the positive shot advantage in xG per match.

Team B looks to be a decent team but is just barely positive on most stats.

Team C is very similar to B but with their numbers on the barely negative side of the ledger.

Team D isn’t out shooting their opponents but much, but the shots they do take are much higher quality.

Team A is Everton

Team B is club in crisis Manchester United

Arsenal have gotten a lot of points from mediocre performances this season and it was a major concern for me. Now Arsenal have gotten 3 draws out of their last 5 matches (the draw against Liverpool was a good performance) where they played below the standard expected and couldn’t get all three points like they had previously.

Arsenal are still in a good spot in the table but without improving their performances, continuing to collect points at 73 point pace is unlikely.

The start of the end of the honeymoon period is coming for Emery. Hope the fanbase remember that we are fighting for fourth and realistically will end up where we did last season. Sp*rs and Manure will be tests for the fans as much as the team. Have to stick together.

That was complete poo. We have Leno to thank for a draw against Wolves!
AK47 at left back is Cleary not fit and we are better off with Granite there and Guendouzi and Torreria in the middle.
So because we were not balanced, Xhaka was pulled around and went back to playing like a headless chicken.
If we dare turn up with anything like that form against the spuds or Manure we will get our asses handed to us.

Spot on! Lots of work to do but points on the board should make that somewhat easier transition. 4th is still our most realistic target.

So this whole season, we have had 2 good games in Liverpool and Fulham, an amazing 50 minutes against Leicester, an amazing 20 minutes against Chelsea and the rest has either been Okay or bad. We remain unbeaten in the last 16 games, but the stats paint a bad picture of things to come. The stats always catch up to the level of performances and it is happening now. We are in a good position so far and have done relatively well considering how bad we were last year, results wise. Right now, the individuals and the system are giving… Read more »

oh…so now its tottenham, everton, man u , arsenal as the medium 4, after the big 3?

Unfortunately, there is not much point comparing us to ManCity right now.

I had ranked the teams D,B,A,C on Offense and A,D,C,B on Defense. Combining offense and defense by adding rank numbers and ordering by lowest total made: D,A,B,C.

More injury time should certainly have been played. Another few minutes could have given Wolves a deserved winner.

Thanks! You made me choke on my spliff and red bull. ????

Sounds like you’re nearly ready to place a bid on Luis Suarez!

Liked the column a lot this time, especially the little quiz at the end.
Keep it up!

If Arsenal wants to fight for a decent position this season they have to replace Mustafi in Jan., play Iwobi at wide left; bring in Auba and Lacca one at a time depending on the game. Against Wolves, he should have removed Lacca and put Auba there, Iwobi switching to the left. Emry should watch the game again with Auba, Lacca, Ozil and let them know that Iwobi ought to have continued, that Micki would fit some games. These players with their dispositions when removed are costing Arsenal a lot.