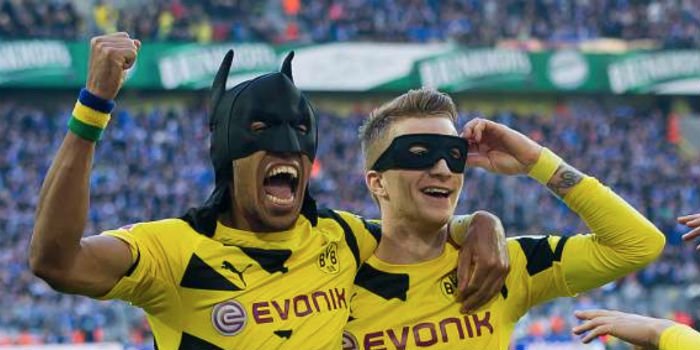 You have to be pretty confident of scoring to celebrate a goal by popping on a pre-packed face mask for the cameras, but that’s something that Pierre-Emerick Aubameyang used to do when he was at Borussia Dortmund.

A prolific scorer during his time at the Westfalenstadion, the Gabon international once marked a strike against Ruhr derby rivals Schalke, by grabbing a Batman mask he’d placed behind the goal before kick-off.

Just for good measure, he even packed a spare for Marco Reus to take part.

On other occasions, he’s sported a Spiderman mask and a balaclava thing that Nike concocted as part of a marketing stunt.

So far, the striker hasn’t gone to such extravagant lengths since moving to Arsenal, but he’s not ruling it out in the future.

“We will see, it depends on my mood,” Auba told Sky Sports when asked about his flirtation with choreographed celebrations.

“I remember the derby when I took the mask of Batman in Dortmund, I had the idea in the morning.

“If I feel good, maybe why not. I have a good feeling now so maybe, we will see.”

Always eager to lend a hand to extrovert athletes in their moment of need, we had a think about what masks might suit Auba.

Score lots of goals and you can do what you want.

Off topic..im worried Real Madrid will come in for Emery….He is spanish as well….:(

Where does he whip these things out from?

no matter what he does my favorite goal celebrations are monreals. so pure.

Yes! Celebrates like a fan, even if it’s someone else who’s scored.

I know it was a one off due to the occasion and result, but michael Thomas’ odd flailing legs celebration for the winner vs liverpool in 1989 probably has to be the best ever arsenal celebration.

I used to love Ian Wright’s celebrations. That was the first thing that made me love Arsenal.

Looked so pure. Utter excitement and joy for what he’d just done. Amazing to watch, even to this day.

But Santi and the jig will forever live in my memory – especially since it was a one-off.

Law 12 of the Laws of Football states that “A player must be cautioned for… covering the head or face with a mask or other similar item”. (See also: lifting a shirt over the head, removing a shirt, climbing the perimeter fence, gesturing provocatively…)

Obviously it’s a stupid rule but its even stupider to get booked for a goal-scoring celebration. It’s a worry that many players and managers – not to mention pundits and commentators – don’t seem to know the rules.
.

Who would be Robin though?