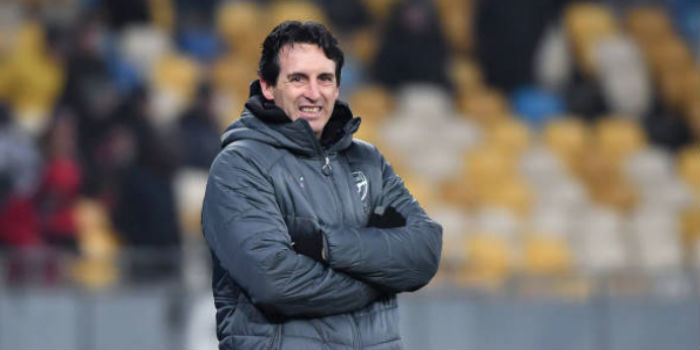 Goals from Emile Smith Rowe, Aaron Ramsey and Joe Willock gave the Gunners a healthy advantage before the break meaning they could relax after the break and hand debuts to teenagers Zech Medley, Bukayo Saka and Charlie Gilmour.

In his post-game press conference, Emery praised the attitude of all his players and admitted he was happy to give minutes to the club’s next generation of stars.

“In the first minute they started pushing and they had some action in attacking moments, but we stopped it well and then when we scored the first goal we took confidence and then took control of the game,” he noted.

“With our positioning, with having the ball, possession, and continuing finding every time an attacking moment for us. The individual quality was good and it was a big performance for us.

He added: “We were thinking today about our victory and also to create with the right players and to give chances to a lot of players.

“We played with young players also and they are working with us in training every day.

“In the 90 minutes, the first thing for us is to win, and then finish the match with some substitutions and the end result.”

With a reputation for detailed video analysis, Emery made clear that this evening’s opponents, despite their status as relative minnows, were given the same pre-game treatment as other opponents.

He revealed: “We analysed the opposition like in other matches and with this respect in thinking to impose our work, our ideas and our qualities.

“But, with respect to them and then, on the pitch and at half-time, we are speaking to remember things tactically and individually to continue with our ideas in our match against them.”

Wenger spoke a couple of years back about pulling a Messi/Ronaldo type talent out of our academy, I always wondered who he was talking about.
Nelson?
Smith-Rowe?
Saka?

I don’t ever remember him making such a comment about a “Messi/Ronaldo” type talent. Have you got a link to that quote please?

And if true (and I seriously doubt that), I still don’t think it means much. Over the years, he’s made comments about 3 particular academy prospects as being “technical complete” and nothing else to teach them technically. Those 3 being Benik Afobe (when he was 15 no less, and Barca tried to poach him), Chuks Aneke and Gedion Zelalem.

Suffice to say, making such predictions can be the kiss of death to a kid.

I can’t find a link, but he was talking specifically about how coaching was becoming less important, and how there was a small group of elite players who make the difference at the top level, and how these players we’re impossible to buy, he then said “Maybe we’ll pull one out of our academy?” and gave the Arsene all knowing grin.
He also spoke this summer about football being dominated over the next few years by 4-5 players.

Erm, that’s VERY different to “pulling a Ronaldo/Messi type from our academy”.

The next big thing will post appearance/goals figures like these at those ages. Those who reach the very top of football usually do so by the age of 23.

Then Nelson is the closest to those figures at his age. If he gets a couple more then he’d top Ronaldo and Messi’s stats at the same age.

If Nelson keeps matching or improving on those figures for the next 2 years, then we know we have something special on our hands. If not, then he will fall by the wayside like most other prospects.

Quite the dramatic absolutist there. So if Nelson doesn’t maintain or improve on his current run of 6 goals in 8 games or match the escapades of Messi and Ronaldo at the same age, then he’s going to “fall by the wayside”?

Isn’t it possible that he just, you know, has a very good career at Arsenal? Without being the next Messi?

I’m going off topic here. I’m watching the debate on sky sports. First of all, Tim Sherwood had no Arsenal players in a combined XI. But what really got to me was that idiot Merson. Why does he hate the club that made him what he is, made him a league winner and stuck with him during his addictions, so much?

Merson is a twat.
But in all honesty, I find it hard to think of many Arsenal players in a combined north London starting 11.
Bellerin for sure. Leno maybe? Torreira?
I know us Arsenal fans will say Ozil, but even on this season’s form, hard to put him ahead of either Eriksson or Alli (I know I’ll get negged to death for that).
Auba over Kane? Not sure, I know we’ll pick our own, but not sure about that one.

Bellerin & Torreira the only certified 2 for me, sadly.

Looking at the numbers Laca and AUB get in ahead of Lamela/Moura/Son…Sokratis ahead of Foyth whose been starting all season, as does Holding. Torriera ahead of Sissoko or Dier. Monreal is better than Davis/Rose. Love Leno and with Lloris’s bad distribution recently he’s closing the gap, although i think Lloris is a great keeper. I think trippier edges Bellerin but recently Bellerin hasn’t been doing much wrong and he’s up and down that flank for us consistently time and time again. Either way we can def do these rats. Deli Ali is not and never will be near the quality… Read more »

Merson is an idiot, and he has lost the respect of a large section of Arsenal fans, self included, from his constant and relentless dissing of the club Before, i used to respect his views, believing he was speaking from the pain he was feeling as a fan, from what was happening in the final days of the Arsene era…but even then, some of his comments were quite negatively excessive, and sometimes even bordering on being outright treacherous. There is no excuse hower now for his contnuing negativity about the club because we are in transition and rebuild of the… Read more »

so you want him to say we played really well, when in fact we played crap, what good would that do, personaly I think he is great, he is not a yes man like a lot of others

no mate, you completely missed the point, constructive criticism, where you justifiably point out the negatives, but for fairness also highlight the positives is most welcome…thats what legends of other clubs who are pundits like him do when commentating on their former clubs..listen to Rednapp, Neville, Rio, Lineker etc commentate on their old clubs…this guy on the other hand cant see any positives about Arsenal, when its not all that doom and gloom really, thats what rubs everybody the wrong way

The thing is, Merson has said on tv that he’s a Chelsea fan..there’s no emotional attachment like that. What I’m saying is, show respect to the club that made you what you are and speak positively about them when it’s deserved. Don’t be paid good money to sit there and say, Arsenal’s defence is crap and no top team has conceded 16 goals, then say Man Utd have a better defence and they’ve conceded 6 goals…when they’ve actually conceded 21 goals and have a -1 goal difference. That just proves your lazyness and sour grapes. Also, don’t talk about an… Read more »

“No home having mutants lol.”

Apparently Sky doesn’t pay ex-Arsenal men to be respectful of Arsenal the way many are towards Liverpool or Man United.

Fuck em. Who cares? Pundits have made a living out of bashing us for years now. 18 games unbeaten. Let’s beat the shit on Sunday and ram it down their throats.

What the fuck have S*rs ever won?

I’ve never got the sense Merson doesn’t like Arsenal. Rather that he supports us, he’s just got jaded over the years with our repeated flaws and failings. Bear in mind that he’s not exactly an objective analyst like Gary Neville, he’s always made more emotional judgements – which generally means he’s less likely to be accurate (which is fine by me, he’s a personality and I guess makes for interesting viewing if you like that kind of thing). But because his emotions tell him Arsenal will disappoint him (which I think we can all understand), that’s why he comes out… Read more »

Well Pundits are hired for being objective – if emotional judgements is what they are hired for, the TV studios might as well hire fans and telecast brawls in pre & post match shows!!

He’s actually been a Chelsea supporter since a child, so his comments aren’t emotional.

he doesn,t hate arsenal, its just his honest opinion, he dares to tell the truth.

What truth that Liverpool will destroy Arsenal? Why these pundits do not question Liverpool’s recent record in CL. They might be playing Europa coming Feb. I am not saying Arsenal is playing like invincible but we have not lost last 18 matches. If it was any other team’s record then you would have heard different songs from these so called pundits. Only team which really deserves credit is City as they are really exceptional (at least for me).

Unpopular opinion, but after reading Emery’s insightful interviews translated from Spanish, it would be nice to hear his post-game thoughts properly translated from his native tongue because it’s a shame we’re missing some of the meaning behind his phrases.

Anyway, Arsenal unbeaten in November for the first time since 2005. Great job from the new boss.

It was a big performance ,no doubt but Spurs are an entirely different
proposition. However that does not mean they are unbeatable.
Frankly against any team,Spurs included,I would prefer Emery to the
old boss.The reason is obvious.
The fm doesn’t bother about defence and his tactics are predictable.
Look at the no of times he has been beaten by the big teams.He was beaten 5-1 by BM twice.
As for Emery his study of opponents is indeed pragmatic. Know your enemy
and then you know thyself.
With that ,I believe Arsenal could win 1-0.

Remember however that aspura haven’t won away against us for 8 years and we did win 2-0 last season.

I thought you meant shit

I wish that Jenks had gotten the chest down in their box, turned the defender, and smashed the half volley like he clearly imagined himself doing.

Wenger got rid of merson, and he didn’t want to leave. Resentment for arsene’s arsenal is now firmly wedged up his bitter arse, bit like Stewart Robson being dropped from doing the breakdown, been a bitter cock ever since. Well he seems to like emery, merson is a lost cause and generally dim when it comes to the debate.

Merson was offered a new contract, he chose to leave. He’s bitter that he made the wrong choice