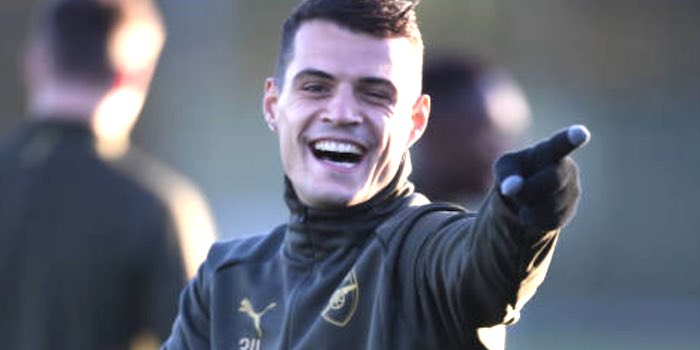 Arsenal have some defensive worries going into tomorrow’s Premier League encounter with Liverpool.

Hector Bellerin is suffering from a thigh strain which saw him withdrawn at half-time in the 2-2 draw with Crystal Palace last week; Sokratis is still feeling the effects of an ankle injury picked up during the Interlull; while both Sead Kolasinac and Nacho Monreal have had hamstring problems which required Granit Xhaka to start two consecutive games at left-back.

It’s far from ideal when you’re facing a team with an attack as potent as Liverpool’s but despite that Unai Emery didn’t sound too concerned when he addressed the issue at his press conference on Friday.

“We are playing a lot of matches – Sunday, Wednesday, Saturday,” he said when asked about his potential defensive crisis.

“We need every player and injuries are normal in a season. Today, we are going to do the last training with the players.

“We will play 11 against 11. I think now we have a good spirit and excited players for tomorrow. For me, the players are okay and we are going to play tomorrow.”

You can’t argue with the solution. If the player you really want isn’t available, you play another player in his place.

It’s like the circle of life. Except there’s unlikely to be a singing warthog tomorrow. In its place, we’ll take an Arsenal win though. We’re not greedy.

Oh well.
We’ll play Wolves at home before the interlull. Hope we see a good response.

I mean, you get down voted, but it’s pretty honest. We aren’t beating Liverpool with no proper full-backs. Our defence is already shaky with full backs, and not having Xhaka in midfield and pace on the flanks also hugely unbalances our attack. We are playing the quickest team in the league arguably. It’s not Emery’s fault, he can only play what he has. It does however suck massively that as soon as we feel like we can test one of the big teams (and I would massively fancy us with a full team), we lose 4 defenders all at the… Read more »

Once again, what was the rationale for loaning out Chambers?

Maybe because he’s not that great and wouldn’t play enough with Arsenal to become any better. Wouldn’t really feel any better with him on the right or in the center this weekend.

Every defender at Fulham has been crap for Fulham, in fairness

The same Chambers who is struggling to get game time at mighty last-placed Fulham.
Oh, well there you go with the rationale.

Man I am loving this guy’s interviews. Long may this last — don’t want no jinxes.

Real shame about the injuries at the back. Would be good to see us against them with Bellerin , sok, holding and nacho. ESP at our place. Think we will hold our own. 2-1 to the arse

Not to be negative or assume a bad result, but given all these injuries at the back, the fact Xhaka may be pulled out to left back which hurts us going forward, and the fact Guendouzi can’t play due to suspension, if we do lose I’m not sure it’s fair to look at this game as a measure of our progress or future results against the big six. Give me our best 11 fully fit and I’d feel that way but there are a lot of factors weighing against Arsenal in this particular match that won’t always be there.

Would be far more comfortable with AMN at left back than Xhaka. Thought he had a good game vs Salah last time an only allowed him through the once

Yeah, totally agree there.
I could live with AM, Lichsteiner, holding & mustafi. Not ideal or the best back 4 but not deplorable. No xhaka back there please!

The real issue I’d think is giving whoever at fullback sufficient support. If mane and salah are running at the Arsenal defense w/abandon, then its gonna be a really long afternoon.

“We will play 11 against 11. I think now we have a good spirit and excited players for tomorrow. For me, the players are okay and we are going to play tomorrow.”

Love a glass half full man.

I’m not sure why we aren’t giving our full backs from our academy a chance to play in the cup games at least. It would have been the oerfect testing ground to prove their mettle. Playing Tolaji Bola (who trained with the first team during the interlull) would mean we have an England youth international at left back, while allowing for the expetienced Lichsteiner to be free to play on his favoured right-side. Xhaka is great in midfield but he is not a left-back and the last game showed why.

Actually Xhaka did a sterling job against Crystal Palace. It’s not his fault that he was made the victim over a piece of blatant cheating. Of course we need him in midfield and maybe AMN would be the best compromise

Good evening 🙂
Yes, sorry – I should say that Xhaka at left back has exceeded my expectations (and I don’t blame him in the face of blatant cheating as you mention), but he gives us so much more in midfield. I hope AMN is fit and raring to go.

Well said. I was impressed with how GX stepped up tot he role and did a solid job. Apalling that his fell back Mustafi, well-accustomed to his role, played so much worse. Think about that. Plus what a killer free kick.

With certain players I have “meters” and the Xhaka-O-meter went a tick up after CP. Completely not blaming him for his “penalty” against one of the best diver-thespians in the Prem.

Sheesh. A couple seasons back we could have used 12 CB’s in the squad, now we need 17 FB’s. We’re jinxed for defender health.

There was a point like 5 years ago, maybe more when we had all 4 fullbacks our injured. It sucked.

Or maybe play Rambo on the right instead of Iwobi?

AMN would work to stop Salah cutting inside on his left foot.

I’m hoping for a win, but a draw would be a decent result considering the make-shift back 4.

My 2 brothers are LiverPOO fans so it’s our Civil War weekend!

Elneny is injured too ?

Time for Mesut to truly perform against top opposition.

Jenks on the left. Need one really fast FB out there.

elneny for medley/papa/mavro depending on their fitness.
we need another defender on that bench.

Auba is useless as a winger. That is very clear.
He might score if he get a chance in the box, in that situation he’s more of striker. But outside the box his main job is to help the team create chances, transition fast, and hold possession.
All of which he’s not good at.

I think we should deploy tacticts which were used in the Chelsea away game.

Ask full backs to go to byline and cross the ball
Iwobi and miki on the wings.
Auba as the striker

Mo and mane do not do defensive duties that efficiently

I had a sense of deja vu about this, and after a quick google there was indeed a period early in the 13/14 season where Monreal and Gibbs were both injured for a while, as was Vermaelan (emergency left back).

Can’t remember who deputised, or how it played out, but clusterf*ck is my guess.

I’d rather see Welbz at left back than Xhaka. I think Emery mentioned it as a possibility in the preseason. I don’t know about his one on one defending, but he could at least run with Salah, and Xhaka can’t. Or even play Mustafi out wide. That’s scary, too, though.

yeah, some of the rags are suggesting that’s what will happen

Let’s just score alot of goals. It’s amazing how that helps when our defence is full of mustafis.

Mustafi struggles. But let’s not forget he’s a gunner. You can do it, Shodran, use your physics, keep your composure! Don’t panic!

if we can survive at the back, we can totally break on pool and do some damage.