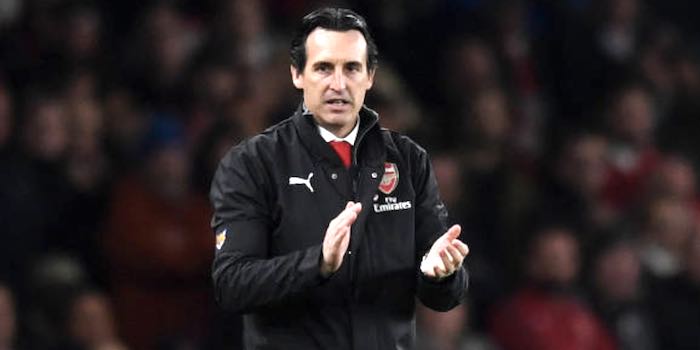 Unai Emery says Arsenal are desperate to return to the Champions League but in the meantime he insists his players can use the Europa League to build strong foundations for future adventures in Europe.

The Spaniard is the most decorated coach in the competition’s history having won the trophy three times in a row with Sevilla and feels his players, if focused, can use play their best football in the competition.

Speaking to Arsenal.com ahead of the Gunners game with Vorskla, Emery explained: “The first thing is the foundation. When I was coaching in Spain there was the chance to play in the Champions League or the Europa League.

“You have to focus exclusively and with great confidence on that possibility. Once you see that you can do it and you’re making progress, the team motivates itself because it’s a title and a European one at that.

“When you have the ability to compete in the Champions League – I had that in Spain with Valencia and then with Sevilla – but if you’re not a contender to win it or it’s more difficult to take that last step, the Europa League is always a place where you can express yourself and show what you can do.”

When Emery was confirmed as head coach at the Emirates, he was immediately charged with securing a return to the Premier League’s top four. So far, with the Gunners sitting in fifth place just a few points off their traditional rivals, it’s fair to say he’s made a steady start.

Following Arsene Wenger’s desparture, he thinks getting back to basics will play a big role in the club’s success.

“When I joined Arsenal, I joined an Arsenal team competing in the Europa League. That’s not the place the club wants to be, but it’s still an opportunity so we can’t sniff at it. We want to play in the Champions League because this club needs to play in the Champions League, but we need to understand that right now circumstances have meant that that’s more difficult for Arsenal.

“We want to get back there and that’s the requirement. The whole club and us internally need to be aware of that. That’s what we want, but to get there we need to get back to doing things that perhaps, that for whatever reasons, we weren’t doing in recent years.”

Arteta: We had the chances to score more

”For whatever reason” lol.

Indeed, Arsenal’s European successes are lacking very much.
We do need to start from the bottom, build a character, and return to the UCL not being mere fodder for Bayern and co.

His English is steadily improving just like us! More of that please!
And we’re currently 2 up!

After initially being sceptical, I actually liked the EL particularly under Wenger when it was obvious that we were struggling to make the top four. Rather than being stretched due to CL and PL as Wenger doesn’t rotate much, it was better playing the squad players youngsters in the EL.

I really like him. He’s a breath of fresh air. Backing you all the way Boss. UTA