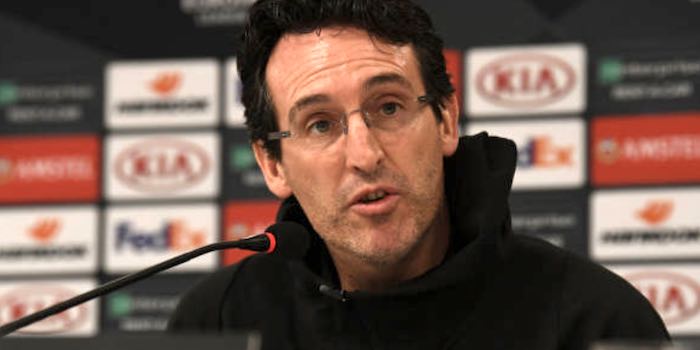 Unai Emery says that Arsenal have a responsibility to give opportunities to young players as the Gunners are set to field a team without a great deal of experience against FC Vorskla tomorrow.

With a host of academy players in the squad for the Europa League clash due to upcoming Premier League games against Sp*rs on Sunday and Man Utd on Wednesday, it’s likely some will get a start.

Eddie Nketiah, for example, looks certain to get a run up front while the likes of Emile Smith Rowe, Jordi Osei-Tutu and Joe Willock could also be in contention as the Gunners seek the win that will ensure they win the group.

Speaking in Kyiv this evening, Emery spoke about the youthful nature of his squad and the reasons behind it.

“We have a big responsibility with young players,” he said.

“At Arsenal, every year we are working very well with young players. When there are matches like tomorrow’s in a very big week for us, where we are playing a lot of matches, we have players to cover here.

“We need to give them chances. They are working with us in all the sessions and also in pre-season.

“They are coming with us because we can give them chances tomorrow and also because we would prefer for some players to not do this long travelling. We prefer for them to stay in London working for the next match on Sunday.

“Then other younger players are coming through with us like Bukayo, Dominic, Zech and Charlie.

“For us, it’s not different because they are working with us every day.”

It’s likely to be a strange affair, in mostly empty stadium, but the youngsters do have guidance from the likes of Petr Cech, Aaron Ramsey, Stephan Lichtsteiner and Henrikh Mkhitaryan – all of whom should be in the side tomorrow evening.

Does that mean Miki won’t be playing Sunday? Looking forward to seeing how the young guns get on ?

Man I hope not

Hope the youngsters can step up. There are a lot of them in the squad.

smart. we will be playing with practically with almost all our first team players who had a week off against spurs who battled hard to win against inter. besides that tommorow we could give youngsters a good chance to prove themselves

none of Erikssen, Dier or Son started today for sp*rs so they did rotate a bit, and they get an extra day of rest, but we should still be fresher come Sunday…can’t wait, COYG!

Correct. That’s why Arsenal in the past used to develop young players.
Since then the money sign has overtaken the game. I fear for the game in England if Mc or afew other rich clubs continue to dominate .Then the game wont
be exciting anymore and young players will have aharder timeto make an impact.
The football authorities have it within their power to limit the no of imported player ie insist that at least 6 of the senior team is made up of youth player from within
the club.

They tried this, clubs just adapted to do the same thing

Certain clubs have dominated for decades already, Liverpool in the 70s, 80s, Utd in the 90s and 00s…just in that 40 year period those two clubs won 22 titles.

Emery’s strong squad selection in Azerbaijan makes sense now. He wanted this group wrapped up by the time we go to Vorskla, having seen Spurs and United right after.

Between this game and the Checkatrade match away at Portsmouth next week, it’s going to be a productive week for some of the younger lads. I’m personally looking forward to seeing Guendouzi again, and curious to see which position Maitland Niles starts. A little surprised that Holding is in the squad, thought he would have been a starter against Tottenham. A side note, there’s a real possibility that the last 32 of the Europa League could include Arsenal, Chelsea, Tottenham, and Liverpool. I think it’s likely that uefa will allocate a fifth Champions League spot to england in the next… Read more »

Strategically this is really clever, we have a joker to play as we’re 3 points ahead of Benfica and won against them (if direct confrontation is decider). If we win, we’re first no matter what, if we draw or lose we still have the last game to secure first place. in the meantime we’re resting key players. COYG

I’m interested in seeing where AMN starts (if he does).
Not sure where his future lies; RB, RW or CM.

I should think defensive midfielder is his best position.

Should. Maybe, but it’s telling in all his loans and even in the first team of arsenal, both Emery and Wenger have used him at wider positions. Though Emery hasn’t use him much, his loans were all also in wider positions (winger).
Could say something. I mean, we don’t even know if he’s the type of DM Emery uses.

But either way, I’m keen to find out. He’s got immense talent. Personally I’d like to see him develop as a RB.

Really want to see Nketiah given a proper run in the team. Bags of potential.

There was a time when teenagers in Ramsey, Wilshere, Denilson, Eduardo used destroy the poorer teams 6-0 7-0 in the CL group stages.. That no longer seems to be the case now even in the Europa league. Kinda wonder why..

Emery looks better with his glasses. He should defo wear it more.

Mkhi needs these games to up his confidence. If he scores a few goals or gets a few assists it will go a long way in helping him. We really need him, ozil and our strikers to shine if we wanna finish in top 4 this season.